Zaha Hadid at Harvard GSD: "Space is Supposed to Enrich your Life" 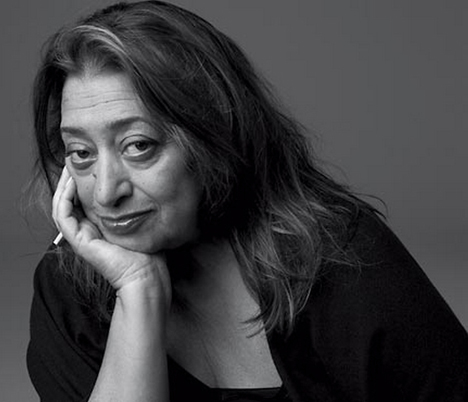 Upon entering the lobby of the Harvard Graduate School of Design last Wednesday, one might be surprised to discover a line of people from the GSD auditorium doors, down the hallway, and spilling into the ChauHaus (i.e. student cafeteria).

First thought: What are all these non-architects doing here?

The chance to hear a world-renowned, Pritzker Architectural Prize-winning and former Harvard GSD faculty architect inspired an impressive turnout for good reason. As one of the few contemporary architects to gain widespread fame outside of design circles, Zaha Hadid holds a unique place in the contemporary architectural landscape—pun intended. Over the course of her wildly successful career, she has been referred to as everything from an architectural trailblazer to a design diva (and not in the good way).

Whether you love or hate the sweeping curves or fragmented geometry that have become her trademark, the hype has vaulted Hadid to the upper echelon of fame and recognition amongst the black-turtleneck-wearing architecture crowd and mere mortals alike. If you're not sold, she also designed the London Aquatics Center for the 2012 Olympic Games and some great plastic shoes. 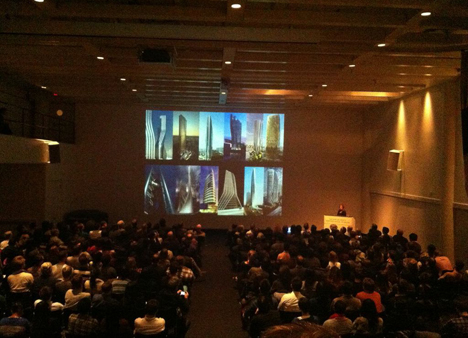 The lecture began with a brief introduction from Mohsen Mostafavi, Dean of the GSD, friend and former classmate of Hadid's. Mostafavi said of Hadid:When she first started to develop her work, some people talked about how it was about the calligraphic line.It's interesting to see how the office has managed to bridge that line, between the calligraphic and the whole domain of digital culture and the impact of computation on the firm.

The auditorium was abuzz with GSD students anticipating a talk from a giant of contemporary architecture. Likewise, several impromptu simulcasting rooms throughout the GSD were also abuzz with muffled complaints about not being able to see Zaha in person. 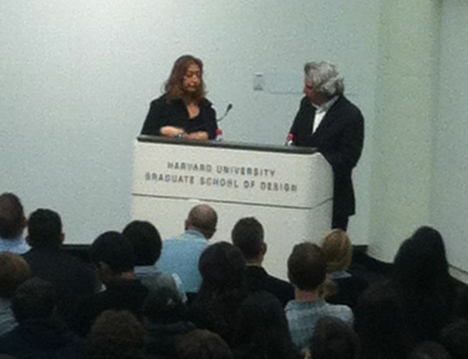 The presentation was a rapid-fire roll-call of conceptual and completed works from across the globe by Zaha Hadid Architects, the London-based studio Hadid founded and runs with partner Patrik Schumacher (also in attendance at the lecture). 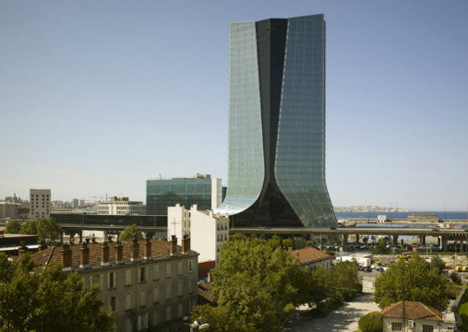 A particularly interesting view into Hadid's process came in her discussion of a series of tower concepts that the firm had been working on for over a decade. The concept renderings and sketches shown appeared to develop their own distinct language for how the towers met the ground, often splaying out and connecting to the preexisting urban topography. 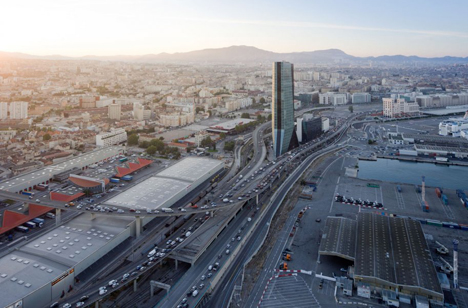 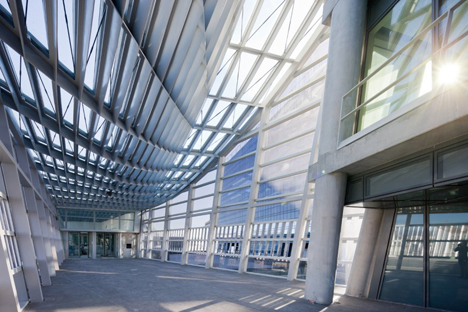 "After 9/11, everyone thought nobody will design a tower, that towers are finished. The opposite is correct, everyone is doing a tower and so we've been trying to do one for ten years," said Hadid of the CMA CGM Headquarters in Marseille, France and subsequent tower projects.

The audience was also treated to look inside one of Hadid's biggest projects: the Galaxy Soho: a retail, office and entertainment complex in Beijing, China. The project consists of five volumes that house retail on the lower three levels with office space occupying higher floors. Hadid said of the project: "I was always interested in this idea of an almost snake-like space." The design, devoid of corners or abrupt transitions, works as a series of futuristic courtyards, simultaneously immersive and enveloping as a structure. 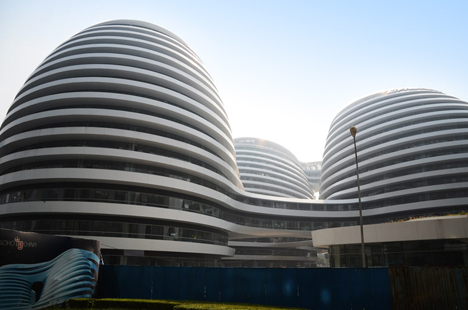 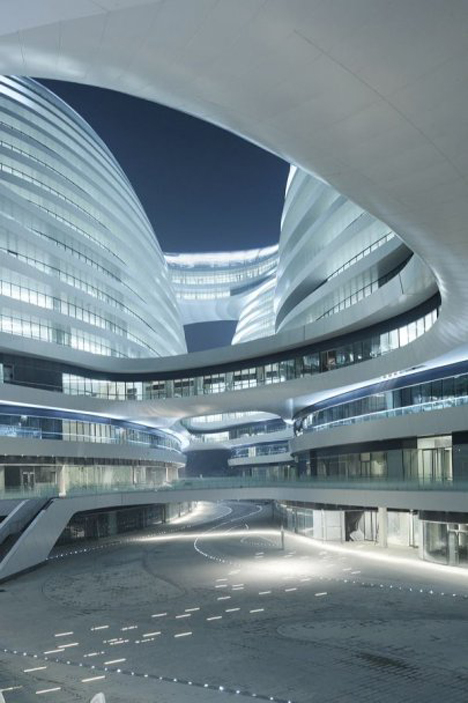 [We chose to] relook at the idea of the city block. It is not a perimeter block but it is at a different configuration of the ground and tower, the podium is not a series of towers but a field of these almost mountainous scape which connect on different levels. So on one level which is one datum on the ground the second datum is higher up. The program from that datum which is higher up is all retail and the one which is above is all offices. All of these spaces have exterior almost a series of egg-like buildings with their own void within. 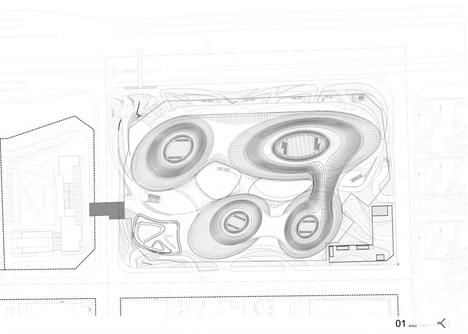 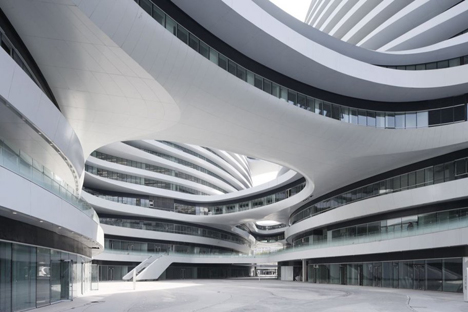 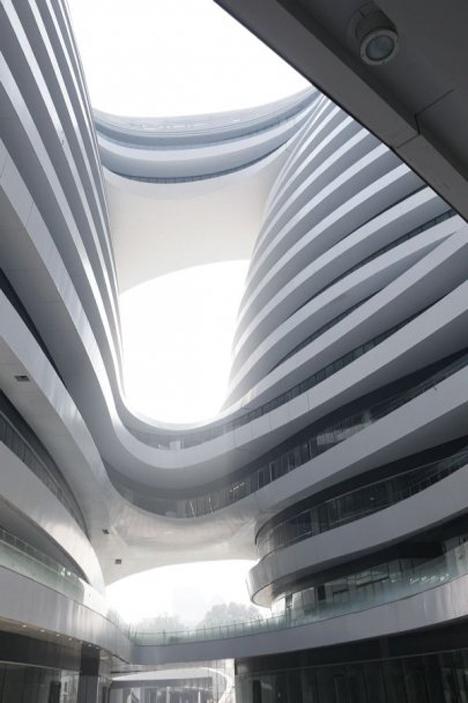 The event concluded with a short Q&A session from the audience and a positive note from Hadid about the power of shaping space:

At the end of the day, space is supposed to enrich your life. Not to be corny, but that's what I think it should do. Whether it's an interior or exterior space. Those of us who are lucky, we have a home. But not everybody has a luxurious place to live, which is why it's important to have [great public spaces]. [The question is] how to create spaces that give people tremendous pleasure?

We do hope that next time Zaha lectures at the GSD, she will go into greater depth about her personal process. However, considering she is one of the most intimidating women in the world—probably no one will have the guts to ask.

Zaha Hadid at Harvard GSD: "Space is Supposed to Enrich your Life"