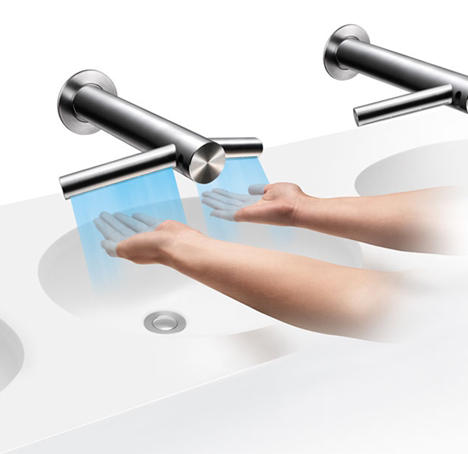 Well, now we know where some of the motors being made in Dyson's new factory will be going: into sink taps! Dyson has designed a sink faucet that integrates their Airblade technology, blowing 28 liters of air per second out of two wings on either side. The Dyson Airblade Tap allows the user to wash their hands and immediately dry them at the same spot, rather than traipsing over to the wall-mounted dispenser/blower (inevitably leaving a trail of droplets on the way). There are no controls; sensors detect when your hands are in a washing vs. drying position, and the tap dispenses water or air accordingly. 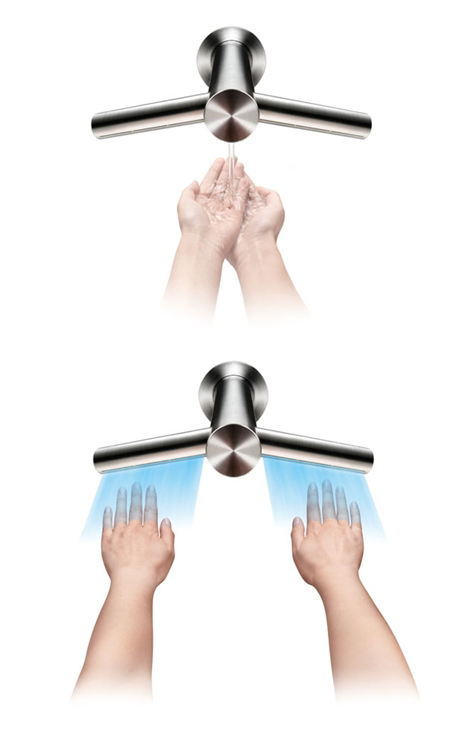 My first thought was, won't washing and drying in the same spot hold up lines at crowded bathrooms? Dyson's angle is that the Airblade Tap is faster than a regular dryer, getting the job done in 14 seconds versus what they say "can take up to 43 seconds" with a conventional air dryer.

The HEPA filter in the Airblade Tap's motor is another selling point:

Most other hand dryers are unhygienic. They don't filter bacteria from the restroom air. They suck in dirty air then blow it back onto hands. The Dyson Airblade Tap hand dryer uses a HEPA filter removing 99.97% of bacteria at 0.3 microns from the air used to dry hands. So hands are dried using cleaner air, not dirty air.

Perhaps the strongest pro-Airblade-Tap argument is the long-term cost. They're claiming a 69% cost savings in electricity over a regular hand dryer, to the tune of just $48 per year. (Disposable paper towels look like the real cost loser here, costing a projected $1,460 annually.) And to reassure buyers that they'll use the product long enough to see the savings, they're offering a five-year warranty. 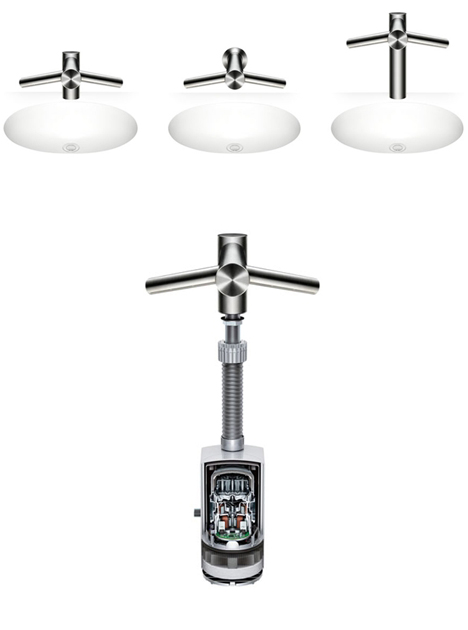