Are Dining Table Social Interactions a Solvable Design Problem? Plus Alex Cornell on How to Choose the Right Seat at a Dinner Engagement 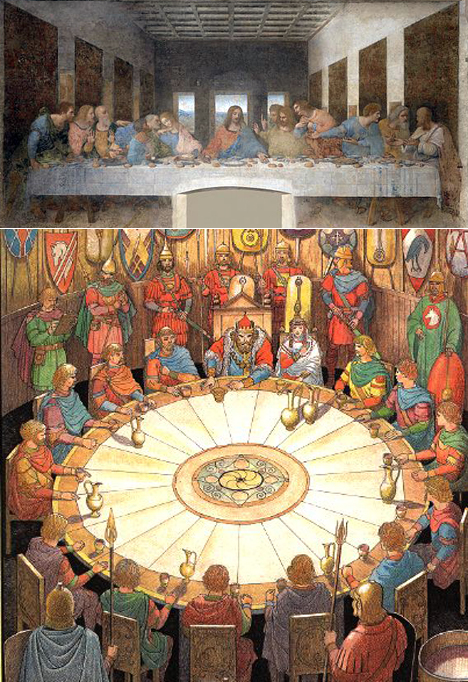 I recently attended a friend's 40th birthday party at a popular, crowded and loud family eatery in Bensonhurst. Sixteen of us at a long table, eight per side. We were hemmed in too tightly to seat-swap, and for the 2.5 hour meal could only talk to whomever was immediately adjacent. And when the person in the Jesus position of this Last Supper attempted to toast the birthday boy (at the far end of the table) with a series of amusing anecdotes about them, it fell flat, as the speaker could only address half the table at time, meaning most of us only heard half of each story.

Are dining table social interactions a solvable design problem, or is it doomed by simple geometry and space constraints? For sixteen people a round table would have been even worse (cutting off cross-table communication) not to mention completely unsuited to a packed, space-tight restaurant.

Best I can come up with, implausible as it is, is to create long, narrow tables modeled after kaiten sushi or baggage claim conveyor belts. The perimeter of the tables, as well as the chairs, slowwwwly rotate around the table's footprint. Your food stays in front of you, but each person across from you is slowly replaced over the course of a meal; let's say it's programmed to perform a complete revolution in two hours. You get to chat with everyone and it becomes impossible to monopolize someone's time. When you see the first person again, you know the meal is winding down.No one is working on this "problem" that I know of; but Creative Director Alex Cornell, a co-founder of Firespotter Labs, has produced an amusing infographic that shows different strategies for seat selection in groups of four to eight people. "One of the most complex social situations you will encounter is the 45 seconds that elapse while deciding where to sit for dinner at a restaurant," writes Cornell. "These 45 seconds determine how enjoyable your next 2 hours will be..." so take note:

(Our apologies to Cornell for having to mangle the original layout to fit it into our template.)

Are Dining Table Social Interactions a Solvable Design Problem? Plus Alex Cornell on How to Choose the Right Seat at a Dinner Engagement