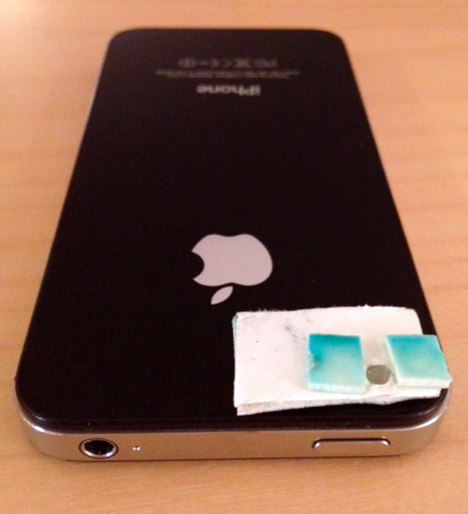 Despite ubiquitous assurances that "There's an app for that," one thing not included in the "that" is the detection of soil-transmitted helminths in human beings. (Helminths are the scientific name for hookworms and their nasty little friends.) Hookworm is a particular problem in developing nations without access to proper medical screening facilities, and Dr. Isaac Bogoch, a Canadian internal medicine specialist, figured out a clever way to tackle that with an extraordinarily simple smartphone hack.

We transformed a mobile phone into a microscope by temporarily mounting a 3-mm ball lens (Edmund Optics, Barrington, NJ) to the camera of an iPhone 4S (Apple, Cupertino, CA) with double-sided tape (3M, St. Paul, MN)... A small hole was punctured in the middle of the double-sided tape, and the ball lens was positioned in this hole. The ball lens was then centered over the iPhone camera lens, with the tape holding the lens to the camera for stability.

Kato-Katz thick smear slides were directly placed up against the double-sided tape, such that a small space less than 1 mm separated the lens from the slide (Figure 1). The mobile phone microscope was placed on top of a slide, which was illuminated from below by a generic, small, handheld incandescent flashlight powered by one AA battery. Images were viewed on the mobile phone screen, and magnification was increased with the digital zoom function; we estimate that this method could achieve an equivalent of 50-60 u magnification. The microscopist manually manipulated the slide underneath the mobile phone microscope to examine the entire area of stool on the slide.

Dr. Bogoch then tested his hacked iPhone on samples taken from schoolchildren in Tanzania and achieved a detection rate accurate to 69.4%—not good enough to eradicate the problem, but certainly a promising start. Dr. Bogoch's research paper in the American Journal of Tropical Medicine and Hygiene [PDF] estimates the hack can be "easily assembled in less than 5 minutes at a cost of approximately US $15."

We know you're thinking "Doc, that is awesome—but you pressed your phone up against human poo?" Of course he didn't, the man is a doctor!

The thick double-sided tape (3M) that held the ball lens to the mobile phone provided a 1-mm buffer zone between the slide and ball lens. In addition, the cellophane strip placed over stool on the slide prevented the ball lens from becoming contaminated with stool.

Understandably, Apple, 3M, and lens manufacturer Edmunds Optics would probably be squeamish about running a commercial advertising Dr. Bogoch's accomplishment. But the health implications for this hack are not to be underestimated. Hookworms reportedly infect more than 600 million people around the globe.

If you've been searching for a socially important Kickstarter project, I'd say you reach out to Dr. Bogoch and get down to business.