What You Need to Know about Crowd Supply, the New Crowdfunding Platform for Product Designers 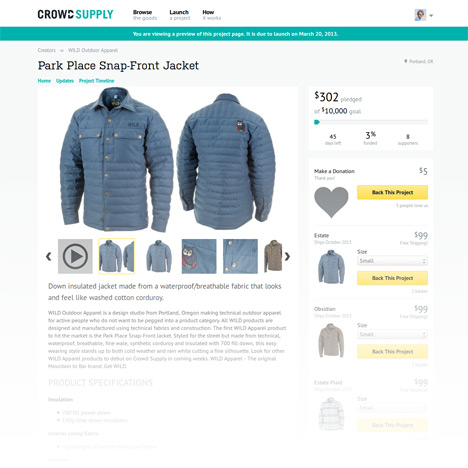 Crowd Supply is Kickstarter for product designers. That's an overly simplistic description and a disservice to what Crowd Supply has accomplished at launch, but it's the best way to explain what it is. When you dig past the surface, into what a crowdfunding site developed specifically for product designers could mean, the differences become exciting.

The site launched this morning with nine projects and three read-to-ship products, ranging the gamut from an iPhone case with a built-in hand crank charger to a cyclocross bike to a dog collar with a built-in leash that I am admittedly thinking of Backing for my own dog.

About two weeks ago, I spoke via Skype with Crowd Supply's CEO, Lou Doctor. He was coming from Crowd Supply's headquarters in Portland and had the familiar look of someone under the gun getting ready to launch a product—happy and sleep deprived. Doctor, like the five other employees at Crowd Supply , comes with a background in engineering that has veered into business, entrepreneurship and running project teams.

I came away from our discussion thinking that Doctor and his team have smartly thought through the experience of running a crowdfunded product design project while simultaneously creating a better experience for Backers.

Let's start with how Crowd Supply is the same as Kickstarter. All of the big design issues that Kickstarter solved are kept in place. Projects are pitched by Creators. They have funding goals and deadlines. If they meet or exceed their goal by the deadline, they get funded. If they miss their goal, they don't get funded. Project pages mimic Kickstarter's familiar layout: Video and funding goal at the top, description and backing tiers below. Creators retain all ownership of their projects and give Crowd Supply 5% of their fundraising total.

Beyond these fundamentals, Crowd Supply has built a platform specifically tailored for product design and manufacturing. They've done a bunch of little things right, but I want to focus on three key areas that I think makes them meaningfully different from Kickstarter.

1. Mentorship This has the potential to be a real game changer: Crowd Supply is staffed by product development veterans who will advise Creators throughout the course of their projects.

When Creators send their projects to be reviewed, Crowd Supply's team vets them, looking for potential pitfalls in their plans. The feedback could come in the form of, "This will be more expensive that you are thinking, you need to raise your funding goal," or "Have you thought of adding an engineer to your team? Here is someone that could help," or "Have you thought through your production plan yet?" If proposals aren't up to snuff, Creators are given feedback on how to improve their project or rejected.

This is such a great feature, not only for Creators but for Backers too. For any Creator manufacturing solo for the first, or even the second or third time, asking questions like these before launch can be the difference between success and failure. Backers can feel assured that someone with expertise has vetted the project and deemed the Creator worthy of launching a project.

Once Creators are allowed through that gate, Crowd Supply's staff offers support for the duration of the project, offering advice and even providing their own fulfillment services.

I love this approach to helping Creators, because it solves a major issue of not only crowdfunding but launching products in general. The team shares their learnings of fundamental knowledge of what it takes to launch something. We're not talking about IP issues, it's basic stuff like finding a factory or figuring out how to do fulfillment. It's one of those things you can only really learn by doing, but man wouldn't it be nice to have an Obi-Wan there to show you the ways of the force.While I think the type of guidance Crowd Supply will provide is a huge win for Creators and Backers alike, the one thing that remains unanswered for me is the liability Crowd Supply is taking on. Kickstarter's approach is more hands off, meaning all outcomes are totally dependent on the Creator. The downside of this is inexperienced Creators might be able to post projects but might not be able to deliver results.

By more throughly vetting their Creators, Crowd Supply will surely lower the risk of failed projects, but does it also open them up to being more culpable in failed projects? I think it's a gamble worth taking, and I'm sure Crowd Supply has looked into the legal implications of this, but I do wonder what will happen if someone gets overly litigious.

2. Crowd Supply Is a Pre-order Store Last September, Kickstarter famously posted to their blog, "Kickstarter Is Not a Store." I think this is exactly the right tack for Kickstarter to take, but it's at odds with the types of tools product designers need in crowdfunding. Crowd Supply has embraced the opposite philosophy (their first blog post says as much). While not exactly a "store" in the Amazon, ships-the-same-day sense of the word, it is a pre-order store. 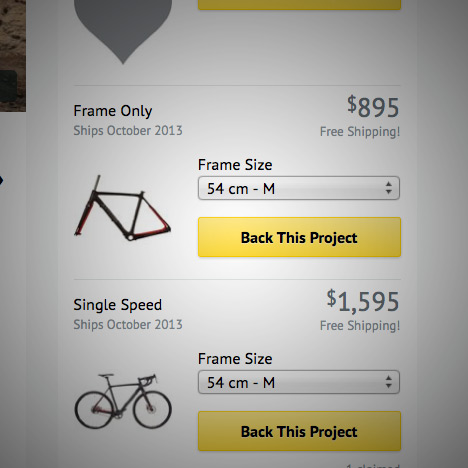 The most obvious example of this is the pledge tier column, which has pictures and drop down menus that allow Backers to select options—different colors or sizes, for example—within a individual level. All I can say to this is "Halle-freakin-lujah." On Kickstarter, Creators can't get this info until they send out surveys to their Backers, leading to all sorts of confusion and issues down the road.

Once Backers decide to support a project, they immediately give their address and credit card info. That's right, no more dreaded Backer surveys. Can I get another Hallelujah from the congregation?

As nice as a drop down menu and address box is, the most important store-like feature by far is that Creators have more control over their project's home page. On Kickstarter, once a project's funding period ends, the page becomes non-editable, leaving a project frozen in time, so to speak. On Crowd Supply, as soon as the project has been funded, the page turns from a funding site into a pre-ordering site until the first products are ready to ship.

There are two ramifications of this pre-order philosophy. The first is that as soon the project is funded, Creators will have access to their funds—no more waiting for the funding period to end to buy supplies or issue a PO to your factory. Secondly, this gives Creators a seamless way of continuing to offer their products without having to develop their own e-commerce solution. Because there is no more missing the funding period, Creators who were worried that they were losing out on sales in the months between the close of the project and their ship date.

3. Clearer Project Communication First off, there's a dedicated "Project Timeline" page that quickly shows what the major milestones have been achieved and which ones are yet to come.

Second, every team member is listed on the project page with their picture. Not only is this a great way for Creators to show the experience and skills of their team, but it's a great way for Backers to have a better understanding of who they are supporting.

Third, ship dates are more accurate. Let's say you're one of the Backers of the Pebble watch. Backer #64,538 to be exact. It's not fair to set the expectation that Backer #64,538 will have the same reward ship date as Backer #1. Crowd Supply will inform Backers of their individualized realistic ship date based on their order in line. Again, this is one of those things that serves a dual purpose. If you make things clear and obvious for Backers, you make life easier for the Creators.

CAN CROWD SUPPLY BE SUCCESSFUL?

Kickstarter is the established and popular frontrunner for good reason. Over the past three years, they have singlehandedly defined crowdfunding—making it accessible, rewarding and cool. The key driver of their success is that their motives are honorable. Sure they make money—as well they should—but their goal is to see creative people of all types get their dream projects off the ground. This feel-good vibe is the reason they have been able to convert people who would normally be suspicious of such a harebrained scheme (let's be honest, crowdfunding is historically still a pretty crazy idea) into Backers. At very least, Crowd Supply will have to establish itself as being at least equally honorable as Kickstarter. This will take time.

We're also at a crossroads for crowdfunding. As the money and popularity have been increasing exponentially, so has the pressure for Creators to perform. Kickstarter was never designed to deal with these pressures, especially for product design Creators. The complexities of first-run manufacturing, let alone starting a business, are vastly different than those faced by a filmmaker, musician, or art project.

Having personally gone through the process of running a Kickstarter project, written guides on crowdfunding for designers and given advice to many Creators, what excites me most about Crowd Supply is that they have designed their platform they exactly the way a product designer would. By providing tools and a support system that are specific to the needs of product design Creators, they have created a better ecosystem for both Creators and Backers.

In the end, I don't think success for Crowd Supply should be measured by if they can 'beat' Kickstarter. Crowd Supply will either be successful or it won't, but that outcome is independent of Kickstarter. At the very least, the framework they have created is a good test case for new crowdfunding standards and designers who want to use crowdfunding to start a business. 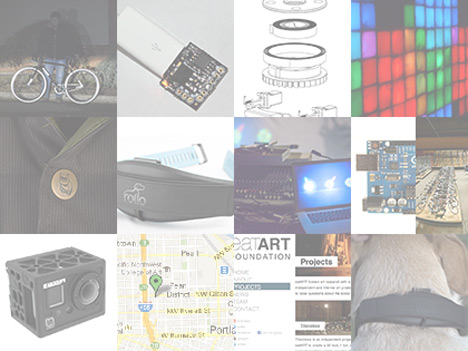 Check out CrowdSupply.com to see it for yourself and let us know what you think in the comments!

What You Need to Know about Crowd Supply, the New Crowdfunding Platform for Product Designers