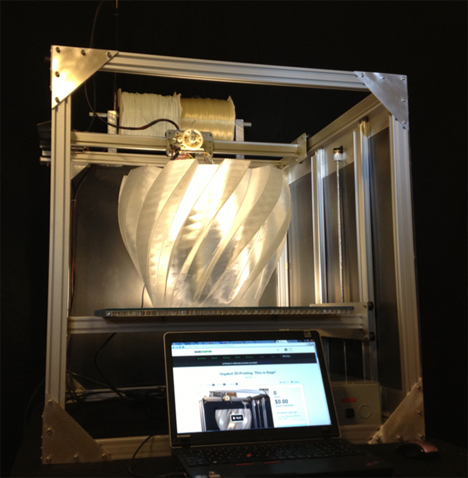 Well folks, it looks like 3D printing is about to get a lot bigger, literally, for consumers. In January a company called re:3D debuted their Gigabot, a large-scale 3D printer with an enormous 24" x 24" x 24" build area. The larger capacity was designed to print out the things re:3D wanted to make, namely, rainwater collecting devices and composting toilets for the developing world.

After the Gigabot was unveiled at Houston's Mini Maker Faire, interest was so high that re:3D subseqently launched a Kickstarter campaign for mass producing them. With prices starting at $2,500 for a kit and up to $4,950 for a flatpack requiring some assembly, buy-in was not cheap; despite that, the interest was real, as they've topped their $40,000 target with $105,000 at press time.

While there's nearly 48 days left to pledge, those looking to get in on this had better hurry—there are just a handful of machines available starting at the $3,250 price bracket.

Here's a closer look at the machine, its capabilities, and re:3D's original mission for it: