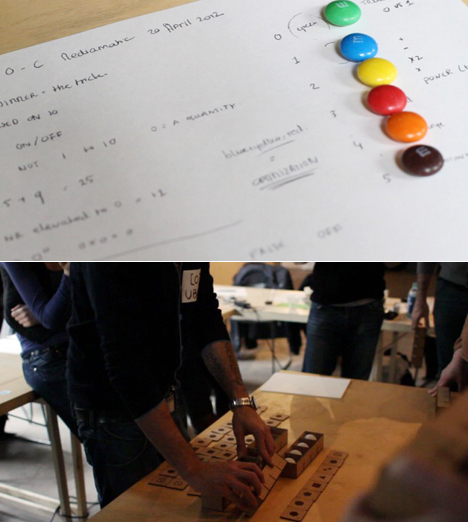 "Creative technologist" Ubi de Feo is part of Hello Savants!, an Amsterdam-based creative collective. In recent years he's been teaching—or trying to teach—Arduino coding to creatives, but ran into the following barrier: "For the beginner, the artist, the industrial designer who wants to start prototyping, [the difficulties of learning to code] can appear as walls they constantly have to crash against," de Feo observed. "If you ask them why, most of the times the answer will be something along the lines of 'I'm a creative person, this structured stuff is not for me.'"

Realizing that the traditional approach to teaching coding was not working for this type of student, de Feo created a new coding workshop called "From 0 to C," starting with a rather radical step: Removing all of the computers from the classroom. Instead, he introduced physical objects the students are meant to interact with.

There will be no code, no editor, no screen. The tools to become a programmer are paper, pens, tape, candy, ping-pong balls, wooden boxes, cups and other common objects.

...The whole class moves through several stages of interaction with the teacher, in which they execute simple tasks [with the objects] and are able to document them. In a few hours the class is (unwillingly) turned into the human representation of a program. This program becomes more and more complex, but because the whole class is involved, it is simple for the single student.

While these mechanisms are implemented more concepts are learned, and digested slowly, with breaks and more games involving boxes and ping-pong balls, the way we "count" using them, challenging each other to represent quantities in optimized ways. When the machine is running, all that we have is sketched out and if the system works, it's time to write it down. From that point on it's just a matter of teaching you the simple syntax of a language (it could be C, Processing, ActionScript, JavaScript. it won't matter).

At this point the student has a clearer vision of what he/she has to deal with, and when the logic is clear, the techniques and the virtuosism that will be implemented over the years are just the result of getting better at it, and the scope of this primer is not teaching you to be the best C/Processing/Flash/Arduino/MSP coder/hacker, but one who knows what he/she is dealing with and has a better attitude towards problem solving.

This sounds like a fascinating way to teach abstract concepts, one that even a computer dummy like me could potentially pick up, and I'm eager to try it out. If you're in the same boat, we just may get our chance, eventually. Though he considers "From 0 to C" as still in the pilot phase, De Feo launched the workshop last year in Amsterdam, was subsequently invited to hold one in Italy, and is currently fielding offers to bring it to other parts of Europe as well as America. For updates, watch this space.