A Nation of Makers: The Idiosyncratic Process of Being a Creative Entrepreneur in China

By Lydia Kuo and Ryan Rowe

For the past 20 years, China has become an economic superpower by acting as the world's manufacturer. From boutique brands to major corporations, companies from around the globe have brought their products, concepts, ideas and innovations to be built and assembled in the factories of Shenzhen, Guangzhou and a host of other Chinese industrial cities. Meanwhile, neighboring Asian countries like Japan, South Korea, and Taiwan have been fostering cultures of creative entrepreneurship with government initiatives and media promotion.

In China, the movement is finally just beginning. This unique environment, combined with a growing middle class and a new wave of flourishing creative-minded Chinese has given rise to a nation of makers—local Chinese entrepreneurs with a passion for creating and selling their own products. In this essay, we take a look at the idiosyncratic nature of life as a creative entrepreneur in modern China.

Between its economic boom and booming population of 1.4 billion, China has become a sophisticated market catered to by all of the world's top brands. This influx of goods and services quickly filled all the gaps in fashion, entertainment, toys, and everything else that the new middle class of Chinese could then suddenly afford over the course of a generation. International brands such as Louis Vuitton and Chanel (and even Apple) gained traction for being high-quality symbols of status, while goods made in China were less and less desired.

Now, as the younger generation—those raised in today's more open and creatively inspired postindustrial China—are coming into their own, they have buying power. Anecdotally, there seems to be a newfound pride and passion for quality, home-grown Chinese products, a sentiment some entrepreneurs are now tapping into. Token Hu, a former designer at frog, manufactures and sells his own brand of casual lifestyle shoes. Although many international brands have a strong presence in China selling shoes of this kind, Token saw a unique gap in the local market and set out to create his own brand, UNITED T. Made in China—or at least "making in China"—is becoming cool.

In certain disciplines, China's 5,000-year-long history of traditional art and craft culture can be an invaluable resource for excellent creative talent and handmade manufacturing. Taiwanese-born Guo Hong Zhi, a successful restauranteur was looking for a source of custom-designed ceramics in 2004 to use in his highend restaurants in Shanghai. He went in search of artists from Jingdezhen, the heart of Chinese ceramic arts for thousands of years, where the most talented aspiring ceramic artists come from all around China to study and learn from the masters. Using samples from Japan, he solicited work from the factories there for about one fifth of what it would cost in Japan. The results were discouraging, with only 5% of the products coming back without flaws.

Thus, Guo decided to set up a design facility in Songjiang, a suburb of Shanghai, where he could invite students from Jingdezhen to work under his personally trained process engineers. Within two years, his operation was not only producing beautiful dishware for his restaurants, but had drawn enough creative talent to sustain a line of very successful ceramics shops called Spin, selling to the public in Shanghai and Beijing. The studio gives local talent an opportunity to explore a more expressive, modern style while they hone their classical skills. This form of culturally sustainable manufacturing is a compelling example of how Chinese design entrepreneurs can create modern Chinese products while still tapping into traditional Chinese culture. 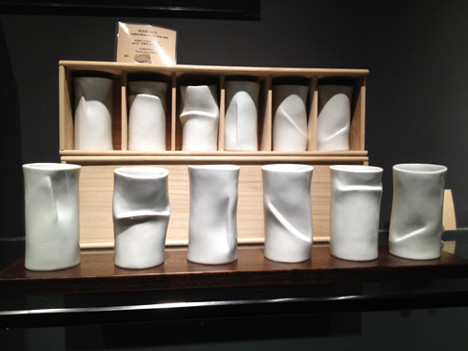 It would be most natural to assume that the advent of industrial China and the endless factories specializing in every type of product manufacturing under the sun would mean easy, direct access to the tools and the people necessary for producing products at a large scale. As it turns out, the manufacturing scene is so dominated by the international brands that costs have been driven up to a point that only big, corporate, international manufacturing is sustainable, while smaller, local operations suffer. Rather than losing the cost battle at existing factories, young Chinese design entrepreneurs like Token are turning to smaller cities without a major industrial presence, such as Xiamen and Dongguan, where labor is cheaper and they can procure secondhand manufacturing equipment to set up their own small factories. A custom-built, self-managed factory has many benefits, including more oversight throughout the entire process, enabling a more iterative approach to experimentation, testing and production. This, among other things, allows business owners to run research, design, materials, production, testing, packaging and marketing all under one roof.

The Chinese online social-network landscape is a sophisticated and dynamic one—with Facebook, Twitter and other Western services blocked, local services like QQ, Renren and Weibo are now among the largest social networks in the world because of the sheer scale of their audience. Because they have such large user groups and are almost exclusively Chinese, they act as strong platforms for building local communities and promoting local brands.

Alien Wang, another former frog designer, created an internationally successful collectible-toy design brand called 909toys, leveraging his reputation as a designer, artist, and toy creator to drum up not only interest in but also crowdsourced design of his toys. Through Weibo, which includes tightly integrated location-based features and the inclusion of rich media in posts, he was able to meet and invite 20 individual artists from the region to each design variation of his flagship toy. Token, a year later, did the same with an early iteration of his shoes. If China hopes to continue to evolve toward a globally respected source of high-quality brands and products, the government and media would be wise to foster this type of community of growing creative entrepreneurs by providing programs and tools to help them succeed.

This article is from Frog's publication Insights_China, a new report that offers direct, in-the-field discoveries of consumers' habits and aspirations, combined with deep, data-driven analyses of contemporary trends in China. Lydia Kuo is an interaction design based in frog's Shanghai Studio. Ryan Rowe is an associate creative director, also based in Shanghai.

A Nation of Makers: The Idiosyncratic Process of Being a Creative Entrepreneur in China