When We Built Things Solidly 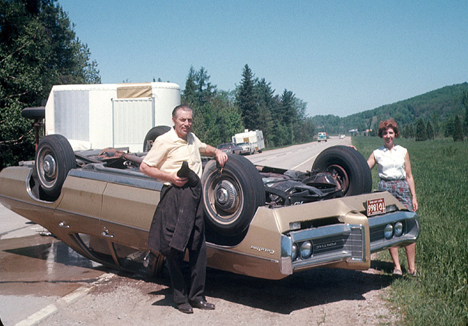 As we saw in Chevy's old-vs.-new crash test, older doesn't always mean safer, depending on the variables in a car crash; but looking at photos like the one above, it's hard to deny that we really used to overbuild things. The A- and B-pillars on that '69 Catalina don't look all that thick, but as you can see, they didn't crumple.

The photo is from ElectroSpark Studios, run by a Florida-based designer who's made it his mission to "[Bring] you photos and ephemera liberated from the attics, garages and closets of America's mid-century vacationers," as he writes. "Most photos are from original Kodachromes for which I have a particular fondness of." His Flickr photoset called Vintage Transportation is a pretty awesome browse—while it's got plenty of cars in it like Remarkably Retro, he's also got trains, planes and boats. 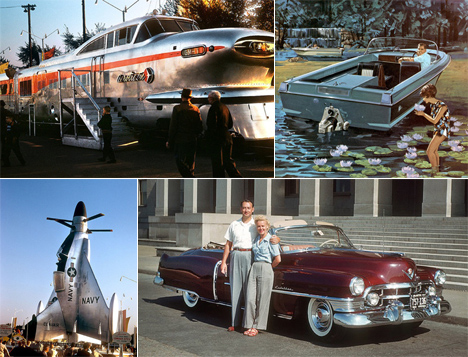 Speaking of planes, the Pontiac photo above reminded me of something else I'd seen:

That there is an astonishing reminder that America used to make ridiculously tough products: During combat in 1943, this B-17 Flying Fortress suffered a mid-air collision with a German Messerschmitt over Tunisia. The left horizontal stabilizer was completely ripped off, and as you can see, the fuselage itself was nearly torn in two. Take a closer look: 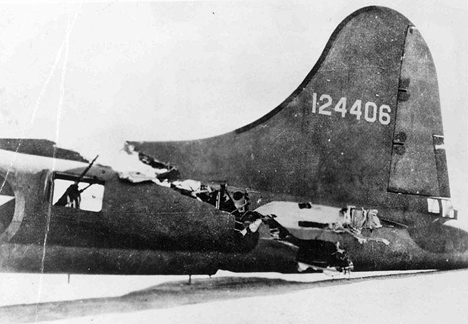 The mid-air photo was taken by a U.S. airman in a neighboring plane, who had seen the damaged plane start to go down... and then come back up, and fly level. He probably couldn't believe his eyes. Despite the damage, the pilot flew the plane 300-something miles back to base in Algeria and landed it safely.After landing, the photographer developed the photo and mailed it home. As mail was subject to army censors, he reportedly put a note in the envelope that said "Censor, Should there be some law, rule, or regulation against sending the picture below to my wife, please seal the flap above and return—it is an unduplicateable [sic] shot and one I should hate to lose."

The damaged plane's nickname, by the way, was "All American."

Another B-17 that famously suffered grievous damage but made it back to base was the "Lovely Julie." 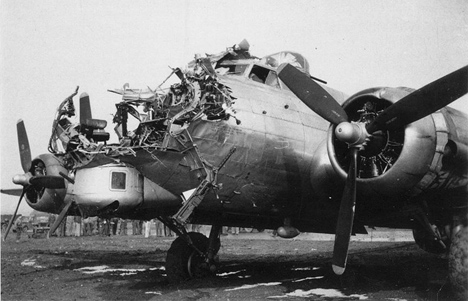 The plane took a direct flak hit over Cologne. Unsurprisingly the bombardier, who sits in the nose, was killed. But amazingly, the pilot was able to wrestle the craft back over the English Channel and landed it safely at base. 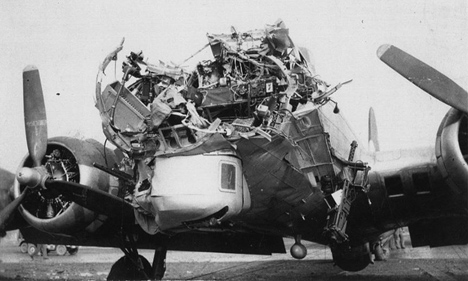 I've been trying to track down the source of these photos, and the stories behind them, and I believe I've found the original source: Cory Graff's Shot to Hell - Stories and the Photos of Ravaged WWII Warbirds, a book released in 2003. Author Graff is a researcher and exhibit planner for Washington state's Museum of Flight. Gathering these photos and stories was presumably no easy task—one reviewer writes of the book "I could not find one error of fact. People who read this sort of material know that in itself is an achievement"—and I don't see Graff's name attached to any of the websites circulating these photos, so would like to give credit where it's due.