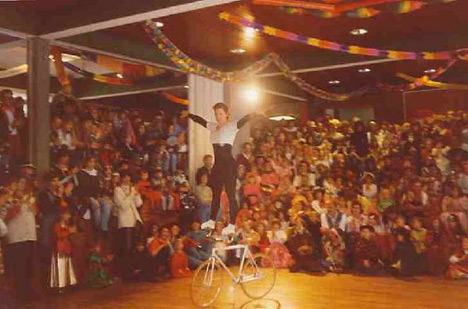 Air quality aside, Beijing has a long history of bicycle culture, and the vagaries of globalization have inevitably brought what is euphemistically known as 'urban bicycle culture' to China's capital. Bike messengers in New York and San Francisco have long known the advantages of riding a fixed gear bicycle in dense, ever-congested city centers, and given their cultural cachet, it should come as no surprise that these oft-maligned suicide machines have caught on amongst Chinese youth, literally leaving the iconic Flying Pigeon in the dust. 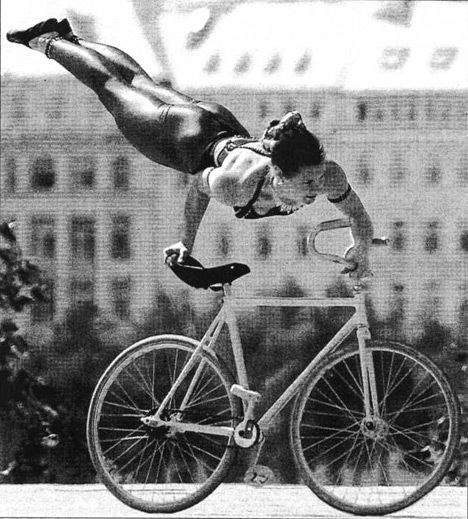 I never had a chance to ride in China myself, but I hope to do so in the near future, especially after seeing John Prolly's travelogue as he tours the mainland with the folks from Mission Workshop and Factory Five. Which is a very long way of introducing Ines Brunn of Beijing fixie outpost Natooke, who I had e-mailed her about renting a bike last time I was in town (I didn't end up doing so). It turns out that Brunn is a German-via-U.S.-expat who holds a Masters in Physics... and, if you'll excuse the pun, a mastery of physics, given her acrobatic ability as a trick cyclist.

It looks like she's running a 1:1 gearing ratio, which means that her ride is essentially a unicycle with two wheels (see also: the previously-seen bicymple), though that doesn't detract from her skills in the least. Here's a continuously-shot alternate routine; check out the upside-down-reverse mount at 1:38 or so:

More impressive still is her ability to execute many of the same tricks on a bicycle with a regular gearing ratio—probably something like 42×16; fixed of course—which requires substantially finer muscle control (plus, the Water Cube in the background is a nice touch).

The backwards skid in this one (at 0:35ish) is pretty cool too.

It ain't design, but an example of an extreme 'use case'—and a remarkable creative endeavor, if I do say so myself.