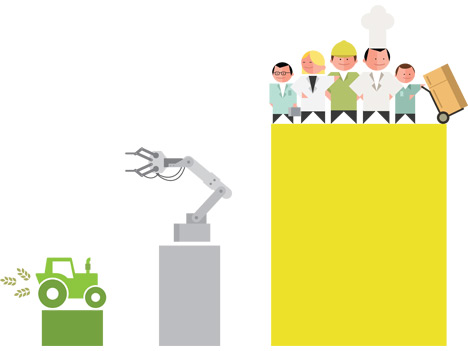 It has been said over and over again that we now live in a service economy. For most developed countries, that means more than 70% of their GDP is driven by the service sector. For the not so developed ones, the number can range from 60–70%—still pretty high. In fact, the lowest sector-based GDP income countries are Saudi Arabia (31.1%) , Indonesia (38.8%), United Arab Emirates (39.8%), China (44.6%) and Iran (48.2%). Meanwhile, the rest of the globe is running more than half of its economic machine solely on service oil.

Before you act surprised about China being on the lower-end of this list, I should add that they expect a 4.5 points increase on their service sector GDP by the end of 2015. That, in numbers, is huge. This is not a coincidence—rather, it is a pattern that runs on top of every economy that is serious about putting itself on the development runaway. There's a clear product-to-services economic shift taking place and it is silently, or not so, affecting the way we live and work.

In some ways, we do know what that means. Metaphorically speaking, it means that we are becoming a software-based economy while industry steadily moves away from its manufacture smoky days and grabs a slice of the digital-era pie in nearly every sector. It also means that we, as consumers, are more willing to trade possession for access and that we expect to engage in relationships instead of short-term transactions when we buy.

Economical shifts are not new to design. In fact, industrial design was born out of a shockwave caused by the mother of all economical shifts: the Industrial Revolution. The early Bauhaus movement was about creating a new breed of professionals called industrial designers. These were people who could both look back at the artisan mindset and look forward to the new industry, not aside or against it. In order to do that, this new breed had to integrate arts and business thinking, yes, business thinking, as production was the imperative business model those days. Ok, let's call it "production thinking."

Despite the recent explosion of fancy design suffixes, real design was never alienated from business. No, I'm not talking about art or the shallow exploration of design in advertising. Instead, real design, since its early days, has always been about bringing a human perspective to any system in order to find opportunities to create positive impact, and, at the same time, keep a steady and sharp eye on business profitability and/or execution viability.

Returning to the present, we are now living the next shockwave. I'm talking about an economy that has moved from the commercialization of hard-goods to a more dematerialized state where people exchange electrons and borrow thing from one another instead of owning it—an economic system where it is possible to thrive whether or not you sit at an industrial plant. A system where David-like startups are seriously threatening gigantic marble dinosaurs by rethinking the way they serve their customers.

Alright. It is what it is, and gosh, thanks for the most of it. But that being said, what are the new skills and knowledge we are going to need in order to keep designing for this new world?In contemplating the answer to that question, it is not difficult to realize that if some products are dematerializing and vanishing into the air while others are becoming coadjutant players in more complex business scenarios, design must also transcend the object and its classic form-and-function mindset and be employed in a much broader context.

Thus, Service Design is not a discovery but a natural gravitation, an evidence of the good and old design, naturally following the economic transformations of the last decades. Everyone who wants to design—I completely believe that everyone is, or can be, a designer—needs to start seeing services not as product plug-ins anymore but as a totally new economic structure. The service is the economy.

But this can be tricky as this new market orientation entails changes in all colors and flavors in the old and cozy product-oriented mindset that ruled the world economics as we knew it. In order to properly follow this shift, we need to step out of the old mentality that services are intangible products, as this view does not solve the puzzle. In fact, it makes it worse, as it invites you to still think about services using the old brick and mortar value chain model.

This is the essence of what we, at live|work, call Service Thinking and there is much to be discussed and recovered from our past on this matter. No designer should venture on the design of services without a deep understanding of the transition from ownership to access, its meaning and consequences to companies, society and the world itself. This is not an ordinary subject as it impacts every sector of the global economy and some, as we already know, in devastating ways.

Design @ Your Service is about Service Thinking. It will be a channel to discuss these forces as they shake our world in various forms. We will talk about Service Design, but when you see the word 'design' in this context, please, infer Gestalt, not specific tools. If you are looking for a service design tooling and quick fixes channel, you are definitely in the wrong place.