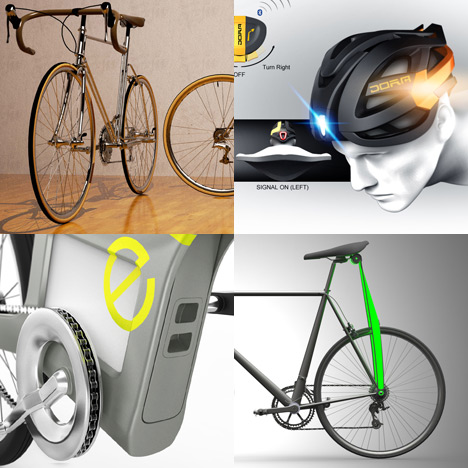 Now in its 17th year, 2013 marks the first time that the International Bicycle Design Competition has partnered with iF Design Talents. Although the judging took place in October, following the submission period, the winners were announced just a couple of weeks ago at the Taipei International Cycle Show. Given the sheer backlash to two of the more recently-seen bicycle concepts here, we'll offer no more than a measured critique of the winners of the 2013 International Bicycle Design Competition. Far be it for me to take issue with the judges' selections of 22 prize winners from a field of 590 entries, who earned an invitation to a three-day workshop in Taiwan (the top ten won a cash prize as well)... though I couldn't help but notice some of the usual suspects, from hubless wheels to stylized e-bikes and, of course, lights galore. 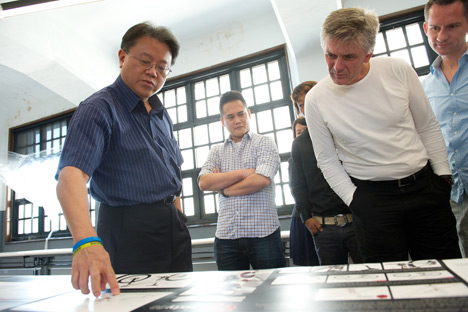 In any case, here are the 12 'Third Place' winners, who earned the invitation to a three-day workshop in Taiwan, with a few discursive comments where applicable. 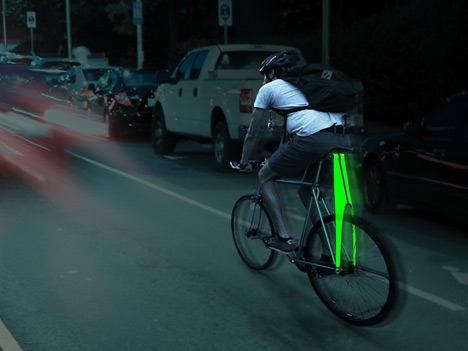 ALIGHT is a retractable lighting device that attaches to the rear seat of a bicycle, [incorporating] stretchable electronics and a retractor mechanism, which allows it to be coiled up or extended out. By extending the light to the rear wheel axle, it creates more surface area and a larger visual impact [which can be seen from all angles]. ALIGHT emits a bright green light, which will turn red when braking and flash yellow when turning left or right.

- Definitely a novel approach to bicycle lighting, but I wonder how other road-users will interpret the lines of light, which don't explicitly indicate a bicycle (or any vehicle, for that matter). Drivers and other cyclists alike might find it confusing. 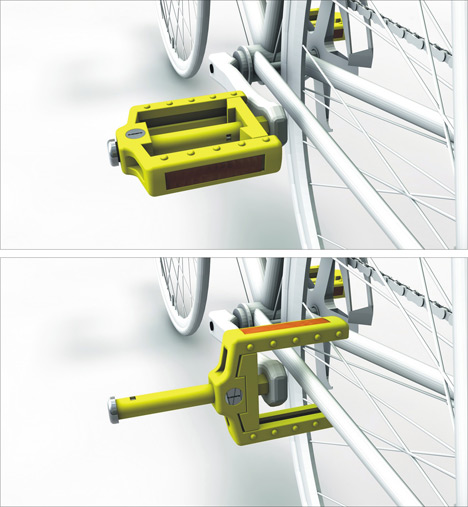 Using the profile of the pedal, the two sides of the pedal are extended to form a fork-shape, it is then fixed at the support of the rear wheel, locking the pedal. Thus, the pedal cannot move forwards, offering an elegant anti-theft function.

- I find that pedals protrude rather awkwardly when locking up; this concept turns them into an ad hoc locking mechanism. I'd be curious to see if this could be extrapolated into some kind of integrated U-lock, but I imagine the additional bulk/weight would be a limiting factor. 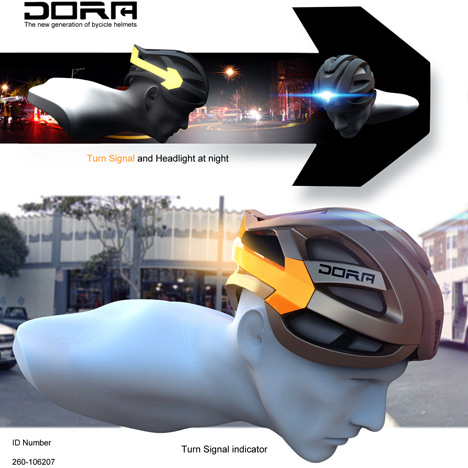 DORA has been designed for cyclists who travel through the city very often, especially at night... its lights can be seen from every direction. The other problem is the non-equivalent signals between the cyclist and the drivers, mostly during direction changes. DORA helps you change direction easily and safely. The front light on the helmet gives you light directed toward the road; moreover you can leave your bike (and its light) behind, because the light is exactly where you look.

- I've seen some similar concepts, so it's not entirely original, but it benefits from strong presentation, and the handlebar-mounted Bluetooth remote is a nice touch. Still, I think it would make more sense to somehow integrate the buttons into the brake levers (though this means that each one would either have to have its own battery, or be wired to a single battery). 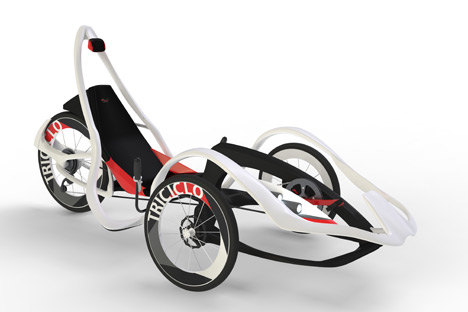 Known for their ergonomics, recumbent tricycles allow people with injuries that prevent them from riding a normal bike to still enjoy riding. However, recumbent tricycle designs have remained unchanged and stagnant. The Gran-Turismo is an update to improve on the areas of aesthetics, safety, materials and technology. Inspired by the essence of a modern super car it aims to match their road bike counterparts in building materials and to stand out in style and performance. Using an existing recumbent tricycle, we overhauled the frame while keeping the same dimensions and geometry to maintain its ergonomics.
* * * 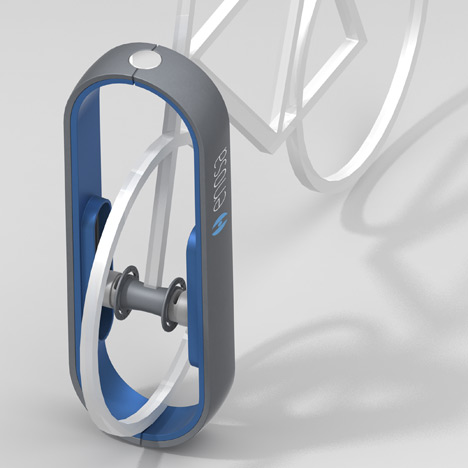 In urban areas, greater use of e-bikes [is an attractive] alternative mobility concept. A system is required that offers a structured service network for sharing energy in a reliable and safe way. Enosa is a distributed system designed to obtain and share green electricity. It covers the need for user-friendly interfaces where the users of the new urban space can share their energy, while having their e-bikes safely guarded. The station, placed in urban areas, is the interface between user and network; the hub of the bicycle permits the energy transfer and a transponder identifies the user.

- This was one of the only two winners in the Services / Facilities category, the other three being Bicycles, Components and Accessories, though I imagine that this category was also underrepresented in the field as a whole. If it seems relatively ambitious as a proposal for urban infrastructure, I imagine that bicycle charging stations are still more practical than electric car stations—largely because the powered component (the hub) itself is far easier to distribute/retrofit and adopt than, say, a Tesla. 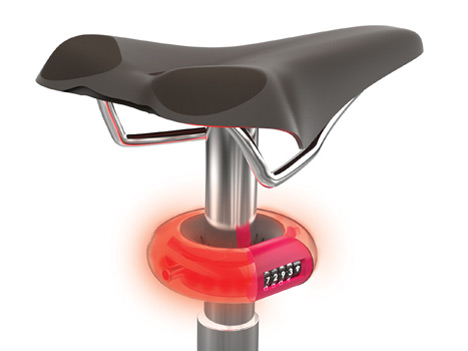 This concept combines two of the most important/essential [accessories for] riding a bicycle. We adopt the swimming tube which represents safety as its form, integrated its purpose into the design and transformed it into a taillight.

- A playful take on an existing accessory; not for everyone, but I have yet to come across any bicycle light that is. However, I must admit that I don't understand the locking mechanism—is there a steel cable inside of it, or if the combo lock is the light's own attachment mechanism? 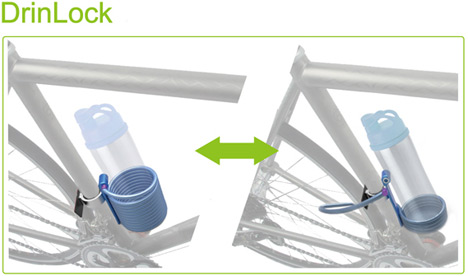 DrinLock is a bicycle accessory design which combines lock and drink holder. When you reach your destination, the drink holder could be easily converted into a bicycle lock. DrinLock not only protects your bike from theft, but also [addresses] the burden of lock-carrying and optimizes the traditional appearance of locks. Due to the simple intuitive operation, and the combination of drink holder and lock, DrinLock has become a novel design of both forms.

- Like the Tube Light/Lock, this variation on a frame-mounted lock holder does double duty, but as with most of the locks seen here, the cable is simply not secure enough to serve as a primary lock. 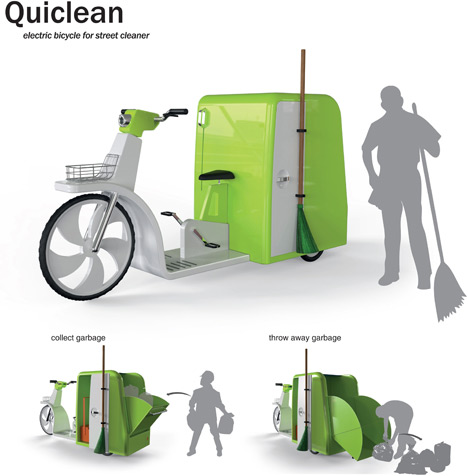 Many street cleaners get easily tired while carrying heavy trash with a handcart and walking around—it's too inconvenient for them to keep carrying cleaning tools... Quiclean enables street cleaners to move faster and easier than pulling a conventional handcart on foot. Especially, it's too hard for them to carry a large amount of garbage consistently by just human-power, so I suggest the electric bicycle. Also its battery can be efficiently charged through a solar cell panel.

- This strikes me as well-intentioned but perhaps not scalable; perhaps it would be more practical to develop a kit to retrofit existing pedicabs and cargo tricycles with the closed box and electric engine. 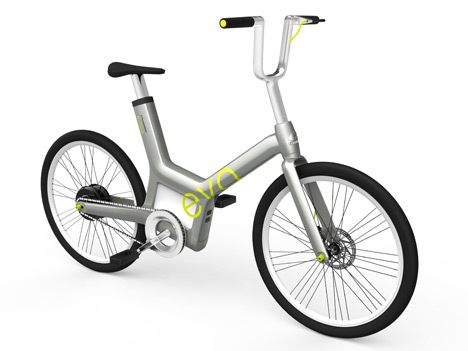 Evolve is an electric bike designed for youth with the focus on integrating the battery according to the shape, to create a wholeness that is simple and intuitive. The basis for the project was user studies in which young people were interviewed and observed in their daily environment. The electric bike is easy to use and operate, with an automatic transmission engine [and optional] mudguards or rear rack... The battery [is designed] to maximize the battery life and minimize environmental impacts. 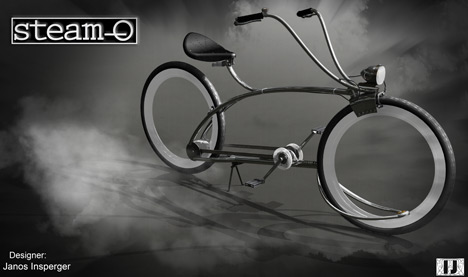 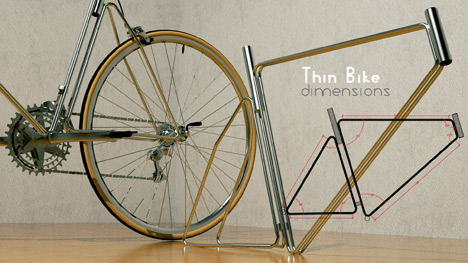 Thin Bike is the project of a light racing bike with a frame as thin as one centimeter, made possible thanks to the locked solid cylinder profile structure which creates triangular geometries.

- Interesting concept, though I imagine there's a reason why bicycles are still made out of hollow tubes instead of solid rails. Anyone? 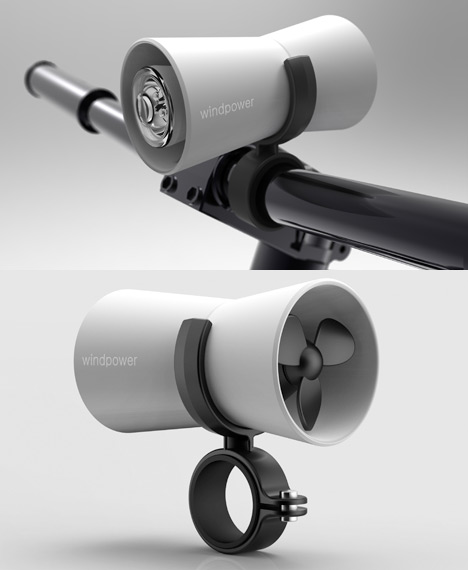 The new wind-powered bicycle LED headlight utilizes head-on wind, while the bike is in motion, to generate electricity as a source of energy for the LED headlight. The electricity is saved in 3xAAA rechargeable batteries and may be used to power a small fan when the cyclist stops at traffic lights.