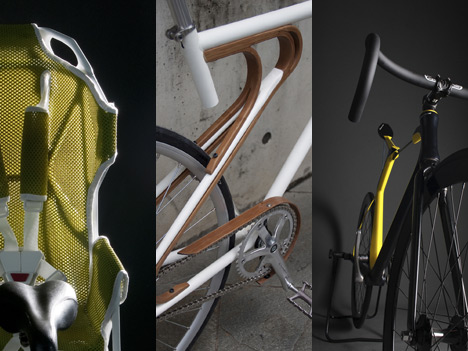 Yesterday, we saw the first dozen honorees for iF Design Talents' International Bicycle Design Competition. The top ten selections were handsomely awarded for making the cut; here are the five 'second place' winners, who received 20,000 TWD (~$670) each for their efforts. 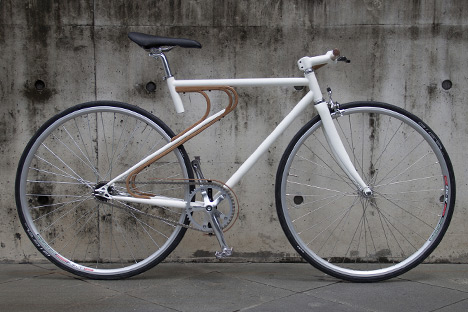 Frame 22 is an urban bike with bamboo elastic structure, completed with a bamboo-craft master. The shock absorber and handle bar stems are made of flexible bamboo, which reduces the vibration and maintains the flexibility of the bicycle. In order to enhance the power of back triangles, the bamboo structure extends from seat stay to chain stay. Bicycles are always cruising around in cities and the road bike is the best choice among all the alternatives for riding on concrete roads. Sometimes roads are cratered, and it is risky for bikers to dodge the holes; therefore, Frame 22 was created as an urban bike with light shock absorber, which offers a more comfortable riding experience to bikers.

What the judges had to say: "This is a fantastic combination of wood and steel. One of the judges would actually like to ride it."

- I share the judge's curiosity about how this actually rides. Interestingly, the cantilevered seatpost / extra-long seatstay design is actually quite similar to Yojiro Oshima's recently-seen wooden bicycle. 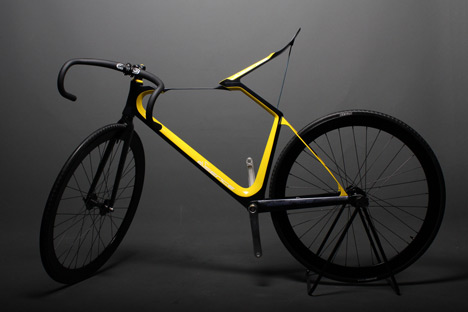 This bike offers two different riding styles, fixed-gear [or] single-speed. To achieve this concept, the bike's top tube and seat stays are replaced by thinner steel bars. There is a special rear hub that can turn in two modes: single-speed freewheel or single cog. The seat is also designed to be removed or assembled quickly to adapt easily to the way in which the rider wants to use it.

What the judges had to say: "The only difference in this special design lies in the carbon fiber frame using steel bars. It's a good design that can actually work and reduce the total weight by 100-200 grams."

- I was a bit baffled by this one, as I thought the skinny tubes were supposed to be tension cables. Frankly, I don't understand how the fin-like 'saddle' works or if it has a shaft drivetrain... or, for that matter, how it converts between fixed and freewheel. 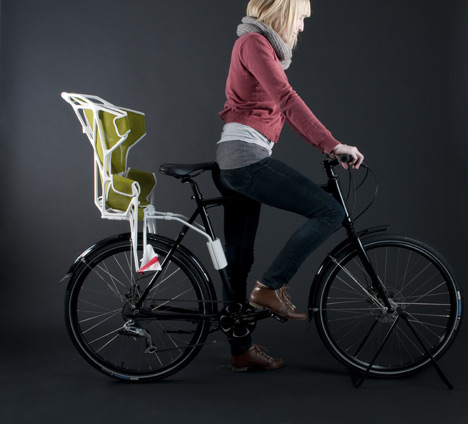 The design of this children's bike seat focuses primarily on the aspects of safety and lightweight. The seat consists of two parts: the protective frame is made of fiberglass reinforced polypropylene. The cushion is a 3D mesh and is soft and protective at the same time. In the event of a sudden stop, the child is secured by the 5-point safety belt. The design of the frame provides optimum protection for the child's head. The system includes a sleeping position and the footrests can be easily adjusted to virtually any position. If the seat is not in use, it can be used as a carrier. The taillights can be attached to the frame as desired.

What the judges had to say: "The design is very simple. People in Japan or other Asian countries would like to use this product. Regarding the design of the frame, the judges reckoned it can actually be made."

- Seeing as I'm not a parent myself, I can't speak to the functionality of this design, but I agree that it strikes me as among the more realistic, production-ready entries. 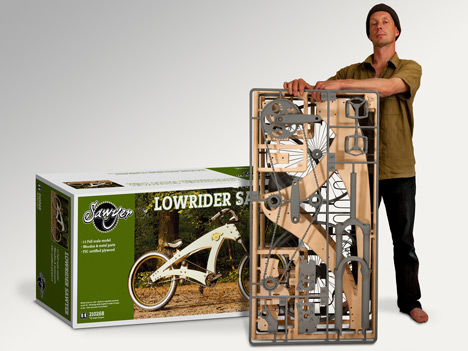 Sawyer is a beachcruiser with a custom made beech plywood frame, constructed out of wooden panels. The bike has special features like the [angled] chainline. A uniquely designed bike with an elegant look and a comfortable ride. As a side (art) project there is a scale 1:1 model kit. This building kit includes all the required parts for building a Sawyer bike. All of the parts can be cut or sawed out and assembled.

What the judges had to say: "It's a cool looking bike that combines both concepts for the competition. He must have designed this bike with particular man appeal before putting together the DIY tools. It looks like it could work and it would certainly be very unique on the street."

- I can see the appeal, but it seems a little gimmicky to me—like something that would turn up on Kickstarter with a $300K funding goal for a laser cutter. 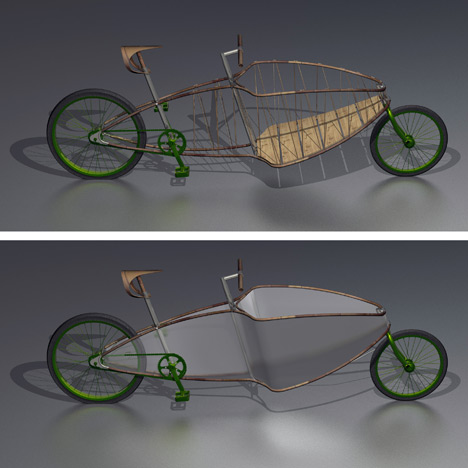 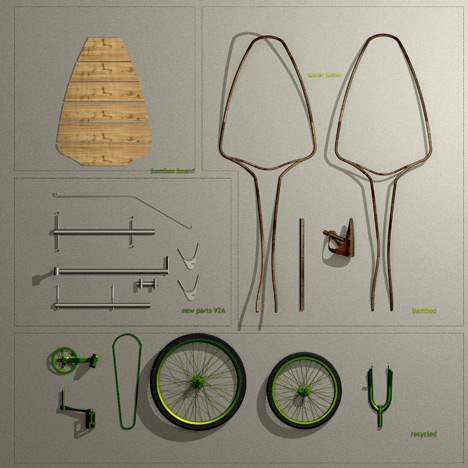 The idea behind the CARIBOO is to offer an affordable cargo transport system around the world. Recycled bicycle parts from Europe are combined with freely available local materials. The basic set consists of prefabricated, stainless steel parts and a main frame made of bamboo. The main frame can be built anywhere in the world where bamboo grows. Bending the frame into the right position is easily done by hand. The frame is flexible and gives the bike a dynamic type of movement with a slightly forward tilt.

What the judges had to say: "Urban cycling is growing as a global trend and one big part of urban cycling is cargo space. People want space where they can store their things and this design helps to solve the problem."

- I actually kind of like this concept despite the fact that it's a bit overstylized. Also curious about the rack and pinion steering, which seems to bisect the cargo bin.