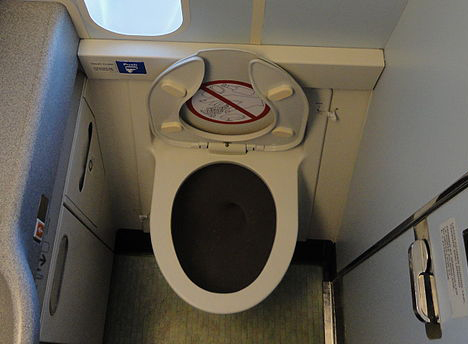 While I've always suspected that this is what happens when you flush the toilet on a plane...

...but apparently it's a little more complicated than that. Zodiac Aerospace (remember their "recline forward" airplane seats?) has their own Water and Waste Systems subsidiary in L.A. that helps keep them on top of the airplane bathroom market, designing systems that keep 60,000 toilets flying and flushing every day, as the WSJ reports. The toilets flush—and generate that whooshing noise--by playing on the differential in air pressure between the cabin and the tanks, hurtling your poop down the tubes at nearly 120 miles per hour. (Maybe it's a guy thing, but after reading that I wanted to re-tell it to the guy sitting nearest me so we could high-five.)

In this video, reporter Susan Carey gets a look at a full-scale airplane flushing system in Carson, California:

The amount of power these toilets are able to generate—or exploit from the pressurized environment, I should say—explain why what you're about to see in this video works:

By the way, Mark, assuming you're American: Things like this are why the rest of the world doesn't like us!