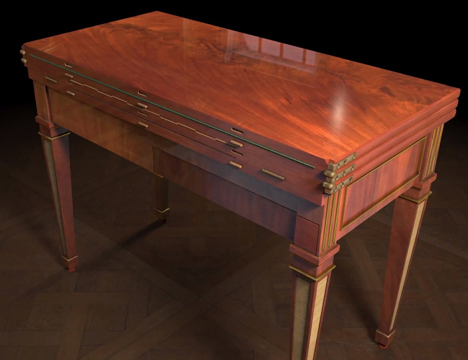 Speaking of gaming tables and things that fold into boxes, here's a video of a wicked design by David Roentgen, a cabinetmaking mechanical genius from 18th-Century Germany. This deceptively simple-looking table has so many amazing features I don't want to describe and spoil them for you—just fullscreen it and watch:

Are you freaking kidding me? Just making the moving hardware alone, pre-Industrial-Revolution, must've been ridiculously complicated; that and the fact that Roentgen pulled this off without CAD or any power tools boggles the mind.

Roentgen and his father Abraham, by the way, were designers and makers on the order of Jean-Francois Oeben, except they were based in Germany. After Abraham died, David took over the family business and was eventually appointed the ebeniste-mecanicien—"Cabinetmaker Mechanic"—to one Marie Antoinette.