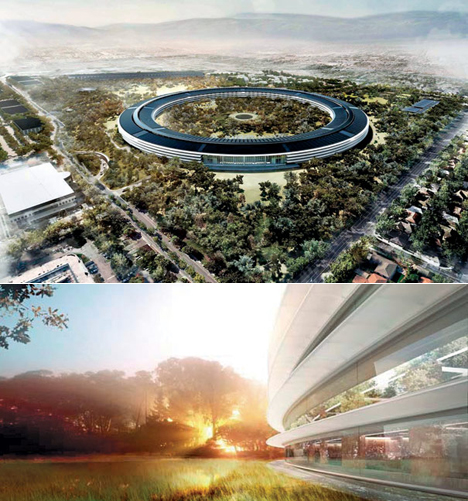 Hard to believe it's been nearly two years since we saw that video of Steve Jobs pitching Apple's Norman-Foster-designed "spaceship" HQ to the Cupertino City Council. Jobs, sadly, passed away just months later. But Jobs' influence is still very much ingrained in the ongoing design process of the building. That is why the building will likely be magnificent. It is also why the timetable has been pushed back to 2016, and why the cost estimate has now risen to nearly $5 billion. (For scale, the new World Trade Center in NYC rings in at $3.9 billion.)

We know Apple's got curved glass down, though it isn't cheap to produce. We know the building's plans call for it to sustainably generate its own electricity, as many of their facilities now do, and that that isn't cheap either. But as Businessweek reports,

The true expense of the campus lies not in green tech, though, as much as the materials--as well as what product designers call "fit and finish." As with Apple's products, Jobs wanted no seam, gap, or paintbrush stroke showing; every wall, floor, and even ceiling is to be polished to a supernatural smoothness. All of the interior wood was to be harvested from a specific species of maple, and only the finer-quality "heartwood" at the center of the trees would be used, says one person briefed on the plan last year.

That's not the crazy part, though. This is: "Jobs insisted that the tiny gaps where walls and other surfaces come together be no more than 1/32 of an inch across, vs. the typical 1/8 inch in most U.S. construction." Anyone who's ever built anything or installed anything using conventional power tools knows that's insanely difficult. It's easy for even an inexperienced craftsperson to take 1/8-inch off of something, as that's the width of a sawblade. The skilled among you can get things down to 1/16, even by eyeballing. But I don't know anyone who can consistently hit 1/32. It's not just twice as hard as getting something down to 1/16, it is an order of magnitude more difficult, and essentially demands less humans and more CNC.

If that didn't get your attention, maybe this will:

Jobs even wanted the ceilings to be polished concrete. Contractors would typically erect molds with crude scaffolds to pour the cement in place, but that leaves unsightly ruts where the scaffolding puts extra pressure on the surfaces. According to two people who've seen the plans, Apple will instead cast the ceilings in molds on the floor and lift them into place, a far more expensive approach that left one person involved in the project speechless.

I should point out that I don't think these demands are crazy in a pejorative way; if anyone can pull this off, it's Apple. Shareholders are complaining about the price of construction, but you don't build something like this purely to increase the bottom line. Jobs said it best during his pitch to the Council: "We have a shot at building the best office building in the world. I really do think that architecture students will come here to see it."