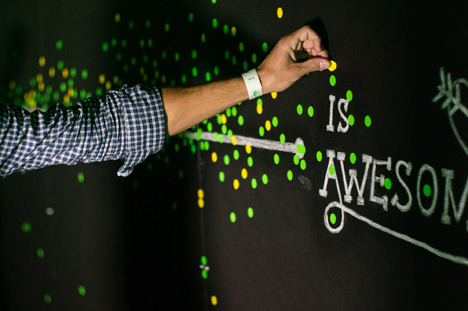 Music shapes our experience of the world—it sets a mood, represents who we are (or who we want to be), captures memories, and defines a moment. The decision to embrace crowdsourcing as the DJ concept for the frog party was a risk in many ways. Who knew what the crowd might choose? What vibe would be created? Would it bring people together or further highlight our separate identities and divergent tastes? It was a meaningful social experiment—not only in music curation but also in social dynamics.

In order to fully embrace the experiment, frog dispatched 11 researchers to collect data at the party about music, crowdsourcing, and social dynamics. This article will both share the findings and reflect on the process that we used to take advantage of this research opportunity most efficiently and meaningfully.

Looking at the experiences that had been designed for the party, we realized that there was one piece of data being captured without any work required on our part—the music selections on the TouchTunes smart jukeboxes and mobile app. The crowdsourcing process would simultaneously build a data set about music preferences across the course of the evening. But like any quantitative data, this could be made more meaningful by supplementing that data with qualitative interviews and contextual observations. 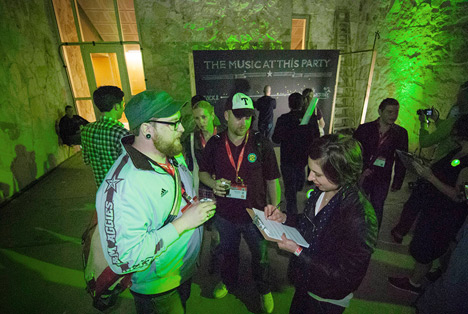 As part of this experiment, we wanted to explore how to most effectively use a larger research team in a short amount of time (no one wanted to entirely miss the party to conduct research). We allocated three hours of time from each of our research team members—one hour to ramp up, one hour of research and documentation, and one hour to participate in a storytelling session. We created data capture sheets that made it easy to see the script and write down notes and quotes quickly. In addition, we created "end of shift" synthesis sheets that allowed us to quickly capture emerging patterns about social dynamics and environment from the research teams conducting research during the party. Two researchers then took the data forward to craft into the key themes.

We cast a relatively wide scope for the research, using a few focused questions that allowed the team to adapt their focus as themes emerged and the party progressed. Some of the questions we decided to explore included: What do people think of the music that's being played? What motivates engagement in the music selection process? What do people think about the value of crowdsourcing over curation? What's motivating their music choices (or their decision not to participate)? Does participation impact perceptions of the music and party environment? How do social dynamics play out when a group is asked to make a decision that is driven by personal taste? How do people go about making their decision as to what to play?

In order to answer these questions, we engaged in a range of research activities—spanning from video capture to one-on-one interviews.We created a wall that allowed people to share their thoughts on the quality of the music at the party. They did this by using color-coded stickers, which we changed hourly hoping to see how participant's feelings of the music may have changed as the evening and crowd-sourced music progressed. We also conducted interviews in two different locations at the party; one team engaging partygoers near the Wall, another making observations and conducting intercept interviews near the TouchTunes devices. To supplement these interviews and further capture engagement over the life of the party, we had time-lapse cameras focused on all 20 TouchTunes jukeboxes and the Wall.

We were intrigued by the crowd's enthusiasm to not only play with the tech toys at the party, but to participate in our research project. We had not expected people to want to talk to researchers with clipboards and pencils, but our research team found themselves swamped with individuals wanting to share their thoughts. The team passing out dots at the Wall could hardly keep up with the demand for dots—all partygoers wanting to make their mark on the wall which would form a picture of the crowd's reaction to the quality of the music.

Okay, enough about the process. What did we learn? 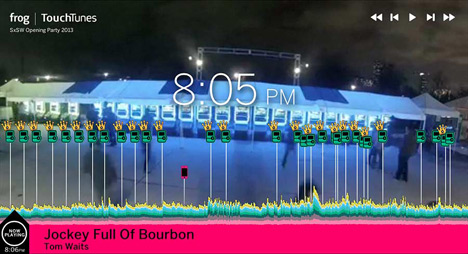