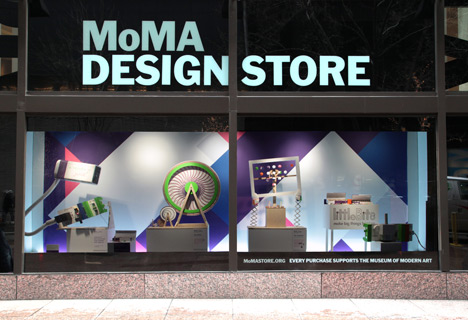 The Museum of Modern Art and open hardware startup littleBits are pleased to unveil a new collaboration, on display in the windows of MoMA Design Store locations in Midtown and Soho as of today, April 9, 2013. Developed in conjunction with brooklyn design studio Labour, the "4’-tall kinetic sculptures [are] made of wood, cardboard and acrylic, [brought to life] with 'Bits' measuring less than 1 inch square."

Although littleBits have been billed as "LEGO for the iPad generation," founder Ayah Bdeir notes in her TED Talk (embedded below) that the transistor has been around since 1947—predating the the iPad by over six decades. Rather, the modular bits comprise a full ecosystem of input/output functionality, such that littleBits cannot be classified strictly as a construction toy or an electronic one. Bdeir elaborates:The idea behind littleBits is that electronics should be like any other material, paper, cardboard, screws and wood. You should be able to pick up 'light,' 'sound,' 'sensing,' etc., and embed it into your creative process just like you do foam and glue. We sit at the border between electronics, design, craft, art and mechanical engineering, and we are constantly negotiating those boundaries. I believe the most interesting things happen at the intersection of disciplines and the borders need to become more porous for us to see the most incredible uses of electronics in the world. littleBits is a library. We now have three kits and over 35 Bits and are working on the next 30, so this is literally just the beginning.

We had the chance to catch up with Bdeir, an interactive artist and engineer by training, about the past, present and future of littleBits.

Core77: I understand it's been roughly a year and a half since you originally launched littleBits. Have you been surprised by the response? What achievement or milestone are you most proud of thus far?

Ayah Bdeir: The response has been incredible. When I first started the company in September 2011, I knew that we already had fans who were waiting for the product, but I had no idea the response would be what it was. We sold the first products on our site on December 20th of that year and we sold out within 3 weeks of starting. [In 2012, we grew over] a series of events: we won best of toyfair, I gave a talk on TED that got a great response, we had a documentary on CNN and at every juncture, demand shot up. It was really incredible to see people from all over the world, parents, teachers, kids, designers, artists, hackers getting excited about littleBits for different reasons.

I think my most proud milestone is that despite all I heard about the toy industry being competitive, jaded and without mercy, we won 14 toy awards in less than eight months (including Dr Toy 10 Best Educational Products, Academic's Choice Brain Toy, etc)—in some cases, we bested some of the most popular toy companies in the world.

There is nothing that resembles a routine. Not even close. Every day, there are crazy new fires [to put out] as well as amazing new opportunities. The only constant is that it's a mega fast-paced and high-intensity day. I work with the engineering and design team on the product, we review prototypes, make projects. I work with the operations team on solving issues around scaling production, and getting our infrastructure right. I work on corporate-level stuff for the company, from the mundane (like insurance) to the most challenging (like financial models). But definitely my favorite part of the day is looking through the projects page and social media and seeing what people have made with littleBits.

What's the most impressive thing you've seen someone make out of littleBits?

Every once in a while I have a new favorite. Just yesterday, I saw a series of bioluminescent sea creatures made with littleBits and I found them so romantic and soulful. A few weeks ago, I saw an Easter egg decorator that was amazing too.

But for sure the most impressive projects I've seen have been the ones for the MoMA windows. They push the boundaries of littleBits in every way: their scale, how long they will be on display, and the simplicity of the designs as well as the complexity of the mechanisms. For instance, the shark is three feet long, has dozens of articulations and an intentionally awkward movement across its spine... and is powered entirely by a single littleBits Servo Motor. 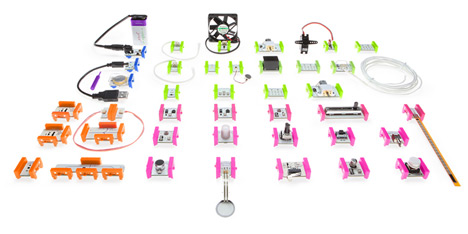 How did this collaboration with MoMA come about?

We have had a relationship with MoMA since they showcased littleBits in the "Talk to Me" Exhibition in 2011, and subsequently acquired for the Museum's permanent collection. In January of 2013, the MoMA store started carrying littleBits in all of the stores, and we talked about running a series of workshops where kids would make projects that would mark the launch in the stores. One thing led to another, and the next thing we knew, we were designing a full fledged installation in the window, and then two windows, and then extended them for a month and a half!

The MoMA retail team was incredibly supportive and they took on our challenge of pushing the scale of littleBits beyond anything we had ever done. The Ferris wheel in the midtown store is five feet large, and powered by a single motor that measures just one square inch. There was no programming, no wiring, no soldering whatsoever, and all of the electronics just snap with magnets. We conceptualized the window with Labour, [with the goal to create] magical scenes that stood as a metaphor for "littleBits make big things happen." We also wanted to create something large enough that people could see them when just passing by across the street, but also intricate enough that a person looking for longer would understand the installation on another level.

The result is two scenes in each store, each with a tiny little character activating a huge sculpture: a petit pedaler turning a Ferris wheel with hypnotic motion, two art handlers trying to adjust a giant frame with an abacus-like pattern, a small fisherman riding a shark 20 times his size and luring him with a blinking LED, and a crazy scientist activating a funny puppet that assembles and falls apart on command. All of the installations have all the materials required to make them on a plaque in the window, as well as step by step guide for you to make your own on the website.

What does the future hold for littleBits?

We are launching a challenge for the duration of the MoMA store windows, inviting artists, designers, makers, kids all over the world to make their own kinetic projects. We will have a running gallery of what people make and amazing prizes for the best projects. We want people to take the '"make it Big" challenge to it's full potential. I believe we haven't seen anything yet!

"littleBits Make BIG Things Happen" will be on view at the MoMA Design Stores in Midtown and Soho from today until May 12.