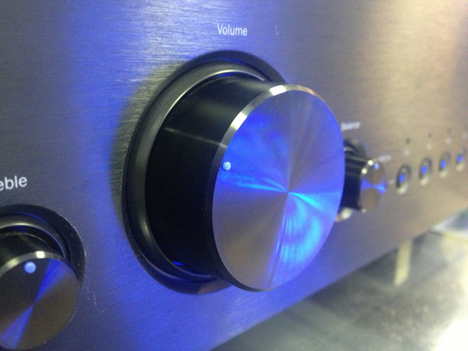 If there's an audiophile's version of kicking the tires on a used car, I'm guessing it's turning the knobs on an amp. Short of actually listening to the thing, I for one would like to feel how the knob turns, see how it feels in my fingers, and detect if it has the properly heavy amount of turning resistance that makes me think it's well-built.

Well, some guy went ahead and started a blog called KnobFeel, with the sole mission of posting "Reviews based purely on the feel of the knob." Perhaps in a bid to increase his international traffic, the anonymous poster (who hails from English-speaking Britain) has devised an interesting way to ensure his reviews hurdle any potential language barriers:

And he can occasionally be coaxed into reviewing knobs not connected to stereo systems:

Okay, so we didn't say they were informative reviews.

There is one thing I'm curious to hear from those of you ID'ers who have worked on knob-equipped consumer product designs. Years ago I saw an assortment of plastic keypad underlays that all provided varying degrees of resistance, allowing the designer to spec out the level of tactility desired. What is the equivalent measure for controlling the resistance level of a knob? Is it merely a washer, or something more complicated?