[Ed. Note: As commenter Rukka notes, the man in the photos below has since been absolved of suspicion as of Thursday, April 18, when the FBI released images of the suspects.] 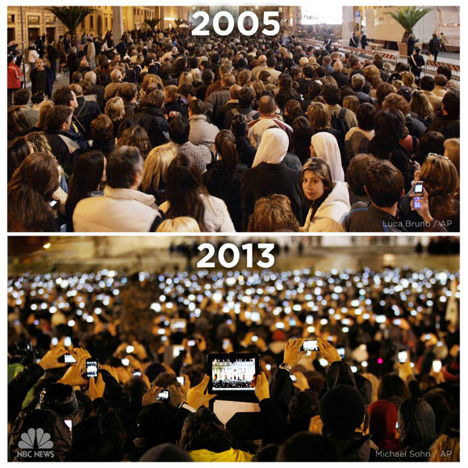 By now you've all seen the photo, above, highlighting the difference between the papal announcement in '05 versus the one from this year. At one point some design team figured out they could wedge a tiny camera into a cell phone, and it changed everything; anytime anything of note happens, the first thing people do is whip out their phones to record it.

As we mentioned in an earlier post, that means we internet denizens now get to see footage of things we couldn't have twenty years ago, like the disaster in Japan. In a country with cell phone penetration that high, hundreds of citizen journalists were snapping pics and video, which helped drive home to the rest of the world how terrible that tragedy was.

Monday's bombing in Boston reveals a new facet to this phenomena. In an effort to identify the bomber, police began actively courting anyone who had taken footage prior to the blast, as there were certainly more people holding up cell phone cameras or now-ubiquitous DSLRs than there were surveillance cameras in the area.

Bostonite Ben Levine works at a marketing and communications firm just steps away from one of the blast sites. Prior to the explosion, Ben was snapping pics of the marathon from the window circled in red below: 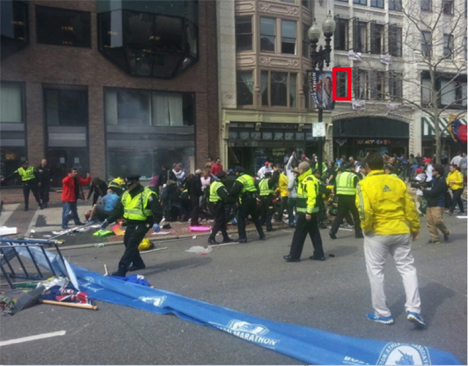 This is one of the photos he snapped a few hours before the blast: 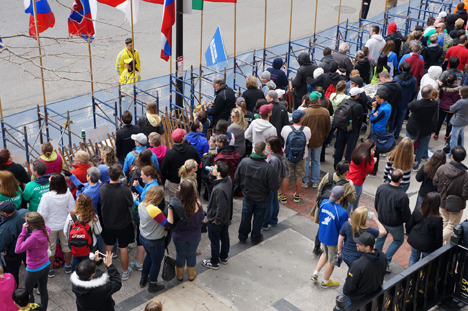 Here's the same photo after hundreds or thousands of eyeballs had pored over it: 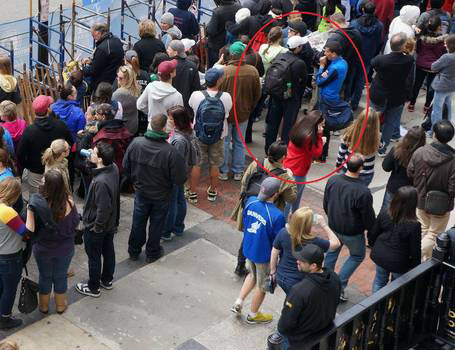 Now, that's not necessarily the bomber, though some think it might be. What happened after the blast is that a Reddit discussion called "FindBostonBombers" cropped up, with people compiling a photo dump from folks like Levine. Redittors and 4channers subsequently pored through the collection, looking for anyone wearing a backpack that resembles the one found near the blast site. 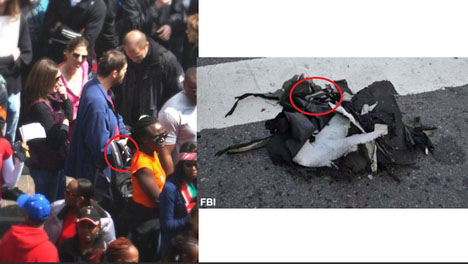 Some have jumped to unconvincing conclusions, claiming that the man featured in Levine's photo is seen in a later image without his backpack, but I'm not sure how one could possibly deduce that from this angle: 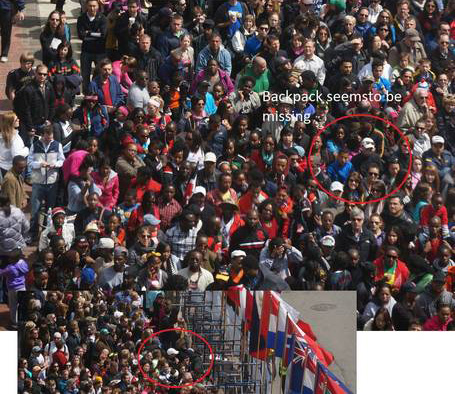 Still, it raises the interesting possibility that this generation's huge surge in shutterbugs, led by the ubiquity of cell phone cameras and ever-more-affordable DSLRs, may unwittingly provide a blanket of crimefighting surveillance, however difficult it may be to parse.

Some have criticized this crowdsourcing of Boston bombing photos, worried that your average net denizen may jump to conclusions on very thin evidence. But it is the authorities that will have the final say. As the Reddit thread points out:

IMPORTANT: We do not support any form vigilante justice. We are not law enforcement. Worst case scenario, we send a tip to the FBI or BPD. Our goal isn't to independently make "them" pay.