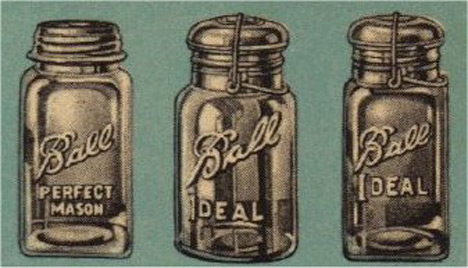 Remember when the mason jar was actually a breakthrough in the American way of life? How the revolutionary new threaded lid offered an alternative to pickling, drying and smoking as ways to preserve our precious aliments? Yes, the mason jar certainly harkens back to a simpler time, before refrigerators and artificial preservatives, and now that we take those things for granted, canning has become something of a throwback jam (cue snare)—the vessel once dedicated to keeping and storing foodstuffs is now commonly used as a drinking glass or decorative object. Not that there's anything wrong with that: Unlike, say, the Edison bulb, the design of the mason jar has virtually no room for improvement, and its timelessness is certainly part of its appeal—as an object, it is imbued with nostalgia, thrift and (if you'll excuse another terrible pun) a can-do attitude. 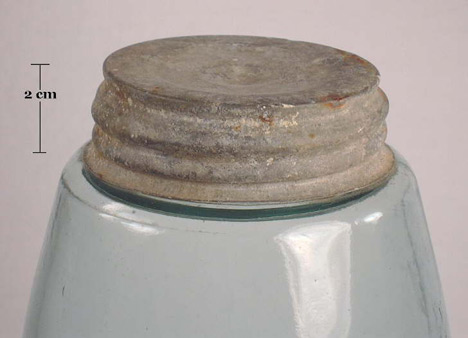 Of course, the canning jar didn't come out of the blue (though we'll see that the color has some significance), and its current mass-produced form was refined over the course of several decades in the latter half of the 19th-Century. The term 'mason jar' is, in fact, a generic trademark—à la Xerox, Kleenex, Jell-O et al (fun fact: phillips, as in the screw head, and zipper are also in the mix)—named after John Landis Mason's clever 1858 patent, No. 22,186, for a zinc screw-top lid. The tinsmith's innovation was to create a seal inside the lid, as opposed to attempting to make a lid that was flush with the jar: glassmaking techniques of that era allowed for rough threading, but the tolerance wasn't nearly accurate enough to create the airtight seal needed to preserve perishables. By grinding the lip of the glass until it was nearly flat (known as a 'square shoulder') and inserting a simple rubber gasket inside the lid, Mason achieved a sufficiently airtight seal, and his namesake was born. 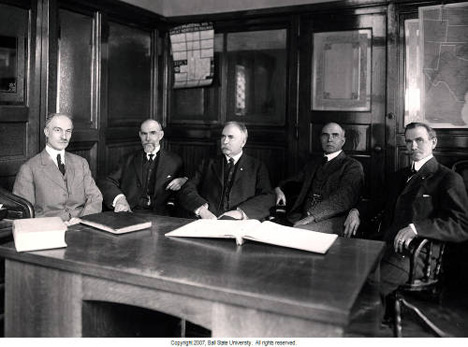 The Ball Bros circa 1913, via Ball State University

The Ball Corporation—which also provides funding for the eponymous state university—was among the companies that capitalized on Mason's invention when the patent expired. As the story goes, Frank and Edmund—two of Lucius Styles Ball and Maria Polly Bingham Ball five sons (a sixth, Clinton Harvey, died in infancy)—borrowed $200 from an uncle to buy a kerosene can company in upstate New York in 1880. Although the vessels were made of tin, the cans were lined with a glass container to prevent corrosion. With the help of two of their brothers, they quickly expanded the glassmaking operation and decided to produce canning jars, for which Mason's patent had expired in 1879. When Frank heard about the natural gas boom in Indiana in 1886, they decided to relocate to Muncie (the fifth brother, Lucius Lorenzo, was a practicing physician prior to joining his siblings in 1897). February 7, 1888, a Certificate of Incorporation was filed for the Ball Glass Works of Muncie. On February 18, fires were started in the furnace, on February 26, the blowers began to arrive and on March 1, the first products were made. The first products made in Muncie were coal oil containers and lamp chimneys, not fruit jars.

The rest is history: Within three decades, they'd refined their flagship product into the form that is still produced today, and this year marks the centennial of the so-called "Perfect Mason." According to the press release: Introduced in 1913 in Muncie, IN, the name "Perfect Mason" acknowledged the first-ever self-manufacture of each part of the Ball jar—ensuring a perfect fit and revolutionizing the home canning process by providing canners with matching jars, lids and bands in a single unit. The Ball Heritage Collection Pint Jars feature a vintage-inspired blue tint, period-correct logo and anniversary embossment.

Here's a sweet manu-vid (manufacturing video, for the uninitiated), which Ball has produced on the occasion of the 100th anniversary:

The timing is auspicious, as there has been renewed interest in mason jars of late, both for their intended purpose of canning and otherwise. A recent article in Creativity describes a perfect storm of circumstances: The recession fueled a resurgence in home canning and DIY projects while Americans' focus on healthy homemade and artisan foods made with fresh ingredients has been a boon for Ball. And as a heritage brand, it's riding the throwback trend—when not used for actual canning, the jars often serve as simple centerpieces at outdoor weddings or as glasses at comfort-food restaurants.

Peruse Pinterest and the fandom is evident. There you'll find all manner of ideas of novel ideas for repurposing Ball Jars, including one page dedicated to 101 different uses. They range from making layered salads in a jar; creating a hanging light; making a DIY air-freshener; and using Ball Jars as a bathroom accessory to hold cotton balls and swabs.

I'll spare you the countless DIY tutorials, how-to guides, craft projects, rainy-day activities, etc., that are just a few keystrokes away, but suffice it to say that this generation has wholeheartedly embraced the iconic vessel as a shorthand for Middle American values. (In fact, we've recently seen a minimalist Euro version and a hipster-friendly mason jar accessory.) 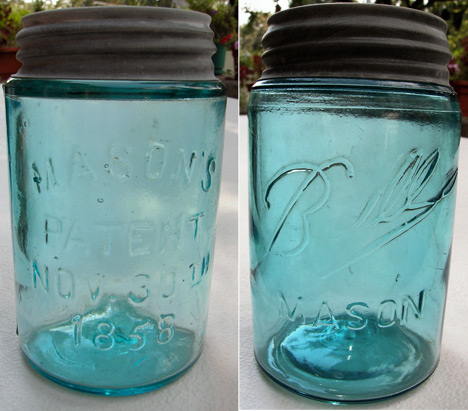 As for the tint? Well, collectors and enthusiasts most certainly already know that the pale blue coloration is characteristic of vintage jars. According to Wikipedia, colored jars were considered better for canning use, as they block some light from reaching the food, which helps to retain flavor and nutritional value longer. More rarely, jars will turn up in amber, and occasionally in darker shades of green. Rarer still are cobalt blues, blacks, and milk glass jars. Some unscrupulous dealers will irradiate jars to bring out colors not original to the jar.

The best known (or at least most SEO-friendly) collector is Bruce Wayne (yep), proprietor of the online resource balljars.net, where he's posted a comprehensive database of his collection, as well as a company history that curiously omits the 1913 milestone. Then again, that page hasn't been updated since 2010 and—as the marquee on the homepage broadcasts—he hasn't had Internet access "for some time," "only a Smart Phone [sic]." Not that it makes his site any less interesting... though I can't help but wonder if he's managed to cross any of the grails off of his bucket list, simply known as "Jar Wants." 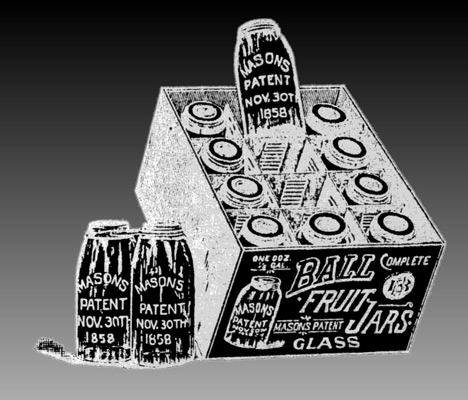 And as one might expect from a fella who moved to heart of Ball jar country, it's also chock full of canning lore (dare I say 'masonic?'), such as...back in the good ole days when there was no such thing as a digital cameras and the Internet, people shared visual information through "snail" mail! Well, believe it or not, that wasn't too long ago in actuality. One of the primary ways of showing another collector what the embossing on a jar actually looked like in those days was through a process called "rubbing."