[Ed. Note: Thanks to reader kblack for pointing out that the image captions were backwards] 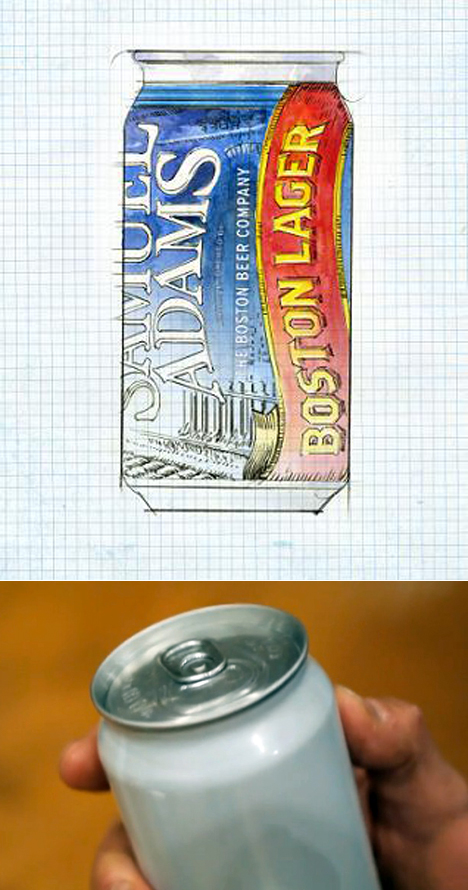 Bud's new beer can comes out in May, and Sly Fox's 360 Lid can is out now. Recently there's been word that a major brewer is introducing a yet another new can this summer. How much more design variance is possible in an aluminum beer can?

Samuel Adams' parent company, Boston Beer Co., hired IDEO to find out. The Sam Adams brand has famously eschewed cans for years; company founder Jim Koch, displaying a Steve-Jobs-like asceticism, felt that cans offered an inferior customer experience and refused to deal in them. But beer sold in cans is some 57% of the U.S. market, and are the only way beer can be served in certain places, like airplanes and stadiums. That translates to millions of dollars' worth. So two years ago, Koch decided he'd consider cans and contracted IDEO to design a better type.

The Boston Globe's got the skinny on what the subsequent research turned up, and it might surprise some of you beer drinkers:

The big discovery: Conventional cans don't allow enough air into people's mouths as they drink. Turns out much of what consumers believe they taste is actually smell.... Increasing exposure to the beer's aromas of hops and fruit can make a big difference in taste, said Roy Desrochers, a professional beer taster at GEI Consultants in Woburn.

So the team began looking for ways to improve air flow. Over several months, IDEO proposed dozens of designs and created eight prototypes that expanded the size and shape of the can's opening. Larger apertures—one shaped like a bell, another like a peanut—were supposed to enhance the air flow and access to aromas. The most promising idea, according to Koch, was a design that allowed drinkers to tear off the entire top.

...But there were problems [with the open-top design]: the tear-off top violated litter laws in most states. And the gaping opening made people nervous. They were worried about cutting their nose or lip on the edge, afraid of bugs flying inside, or the drink spilling.

What IDEO finally came up with is a can with a wider lid (as seen at right, below):

The wider top pushes the aperture closer to the rim (again, below at right), which means beer tips more readily into the mouth. 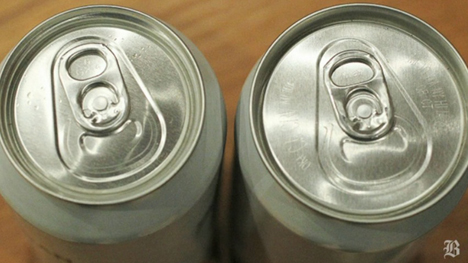 The new Sam Adams cans, code named "Bunker Hill," are due to hit store shelves this summer. Beer consultant Desrochers, who were hired to provide input on the project, feels the new design is a winner. "With a traditional can, you feel like you're sucking liquid out," they report. "With the new design, the beer flows in nicely... and you don't get the sensation that it might spill out the side of your mouth."

The following video gives you a taste, no pun intended, of what Sam Adams went through in their quest for a new can. (Irritatingly, they don't mention IDEO by name even once.)