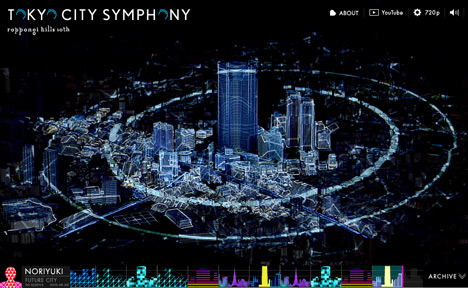 I spent a little time in and around Roppongi neighborhood during my first trip to Tokyo last June, but (as is the case with most work-related travel), I didn't have much time to explore the city on my own. Given the diverse texture of the city and the overflowing stimuli of a new and different urban setting, it didn't occur to me that Roppongi Hills is a relatively new construction, some $4 billion and three years in the making. Centered on the 54-story, Kohn Pedersen Fox-design Mori Tower—named after the developer behind the entire project—the 27-acre megaplex opened its doors in April 2003... which means that this week marks its tenth anniversary. 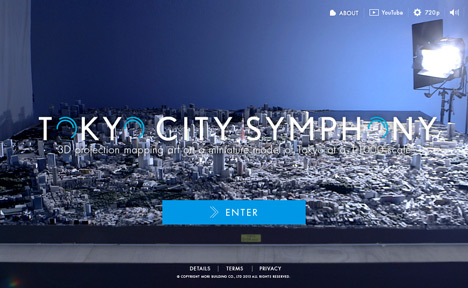 To commemorate the milestone, Mori Building Co., Ltd., has commissioned Creative Director Tsubasa Oyagi to create a digital experience, the very first project for his new boutique SIX. Working with a team of media production all-stars, Oyagi created "TOKYO CITY SYMPHONY," an interactive web app that combines projection mapping with a simple music composition engine to create user-generated ditties with brilliant visuals."TOKYO CITY SYMPHONY" is an interactive website, in which users can experience playing with 3D projection mapping on a 1:1000 miniature model of the city of Tokyo. The handcrafted model is an exact replica of the cityscape of Tokyo in every detail. 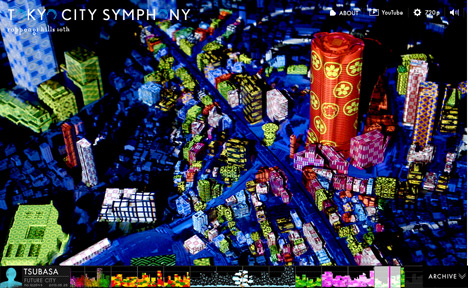 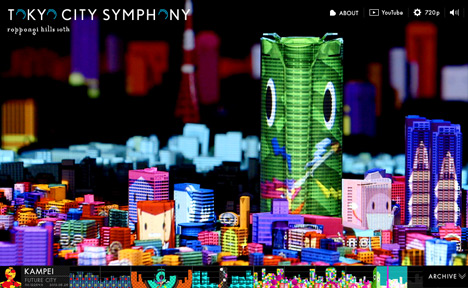 Three visual motifs are projected onto the city in sync with music: "FUTURE CITY," conjuring futuristic images; "ROCK CITY" that playfully transforms Roppongi Hills into colorful musical instruments and monsters; and "EDO CITY," or "Traditional Tokyo," which portrays beautiful Japanese images. Users could play a complex, yet exquisitely beautiful harmony on the city by pressing the keys on the computer keyboard. Each key plays a different beat along with various visual motifs, creating over one hundred different sound and visual combinations. Each user is assigned a symphony score of eight seconds, of which could be shared via Facebook, twitter, and Google+. The numerous symphony scores submitted by the users are put together online to create an infinite symphony.

It's worth noting that the model itself was not fabricated for this project but rather for the city's 2009 bid to host the Olympic Games. "The miniature model of Tokyo used for this project owned by Mori Building Co., Ltd., is known to be one of the largest in Japan at five square meters. Each building was actually photographed and carefully handcrafted." 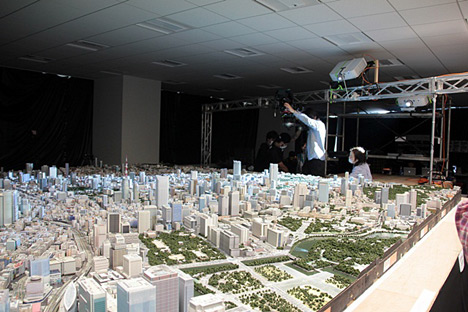 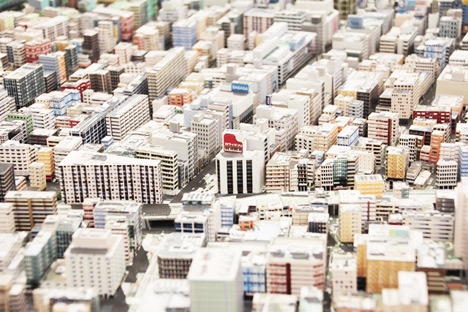 We'd love to see a projection mapping on, say, the Panorama of New York City at the Queens Museum... or artist Yukata Sone's "Little Manhattan," a sculptural scale model of Manhattan in marble. 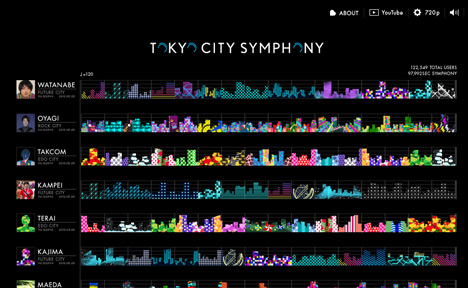 Check it out at TOKYOCITYSYMPHONY.com.