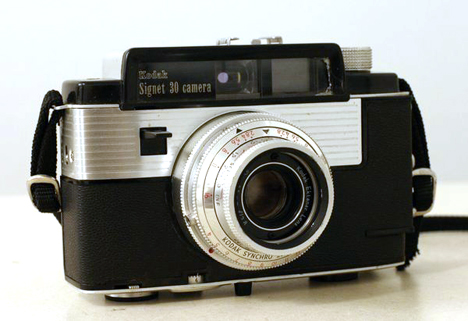 An alarming Wiki entry on Camerapedia has caught the attention of the Reddit community. Entitled "Radioactive Lenses," the original write-up notes that "There are a significant number of [camera] lenses produced from the 1940s through the 1970s that are measurably radioactive."

Apparently the problem is that manufacturers used to use glass containing thorium oxide, which increases the refractive index of the lenses. Unfortunately for users, thorium oxide is a byproduct of uranium production and it's freaking radioactive.

What the Reddit users started asking is just how radioactive. "Anyone with an understanding of nuclear physics," one poster wrote, "care to make some sense of those readings for cavemen like me?" Here was the answer he got:

Nuclear physicist here. Typical radiation levels [on the thorium oxide lenses] can approach 10 mR/hr as measured at the lens element's surface, decreasing substantially with distance; at a distance of 3 ft. (.9 m.) the radiation level is difficult to detect over typical background levels.

10 mR/hr is more than I would want to be exposed to for prolonged periods. In my lab alarms go off if the ambient levels get above 2 mR/hr, and 10 mR is the maximum allowed dose for an 8-hour shift.

- My lab uses very conservative limits for occupational exposure. People who clean up radioactive waste are exposed to doses many times higher and are fine.

- That is the dose rate at contact with the lens, so it will only really matter when you are handling it, and your hands are not particularly sensitive to radiation.

- I'm curious how they measured the dose, specifically whether the alpha radiation was included. Alphas can't penetrate through shit, and will be stopped by a lens cap or filters, even your clothes or epidermis. They could, in time, damage your eye and give you cataracts if you aren't wearing glasses or contacts. Our askscience health physicist explains much of this here. He quotes a study that determined a "serious outdoor photographer" would get only 2 mrem per year, which is really negligible.

The current scuttlebutt seems to be that if you're not putting your eyeball up against the lense—i.e., using the camera backwards—you'll be fine. However, if the camera's got an eyepiece also made with thorium-oxide-containing glass, you may want to re-think using it.

There's a complete list of the known afflicted camera models and lenses here.