Statistically speaking, most of us only use crowbars when we're about to be arrested for Menacing, but if you've ever had to do light demo around the house you know how handy they can be. Someone actually stole my crowbar a couple of years ago, and I never bought a replacement since I haven't recently needed to pry anything open or dispense street justice.

Maybe it's just as well that I've held off, as a new crowbar may be hitting the market at the end of this summer. And, usefully, it also happens to be a hammer. And a 1/2-inch socket wrench, and a couple of other things. I'm normally skeptical of multi-tools, but the Cole-Bar Hammer, which is currently up on Kickstarter, look pretty promising:

I know what you're thinking: How well would that central joint hold up when the tool is extended into a full-length crowbar? 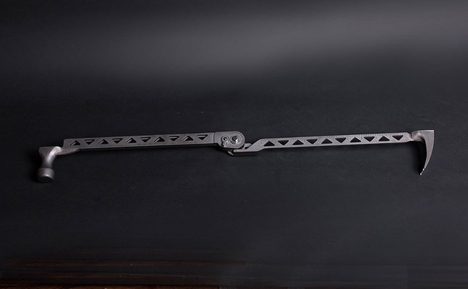 The answer is TBD, as the designers are still trying to get the funding for proper load testing. A second thing that gives me pause is, prior to mine being stolen I actually used the shallow-angle side of my crowbar more than the ski-jump side—but then again I was trying to pry sheetrock off of steel studs without cracking the sheets (long story), admittedly not the typical application.

At press time the Cole-Bar Hammer was up to $64,000 out of a $100,000 target, with over two months left to pledge. Should it be funded, the team estimates production models would be ready as early as this August.