Alno's Pull-Out Dining: How'd They Do That? (Or: How Would You Do This?) 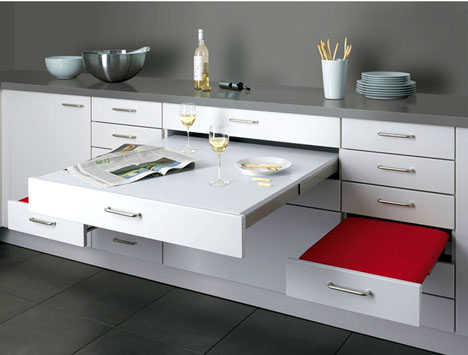 This photo began making the blog rounds some time last year, and continues to resurface on Pinterest, usually with the word "clever" in the description. But is it? Let's think about this for a second.

First off there's the table. Treehugger wrote "I don't know how they get such a big table into the counter, perhaps there is a fold in it." By zooming in on the photo, we can tick that box: 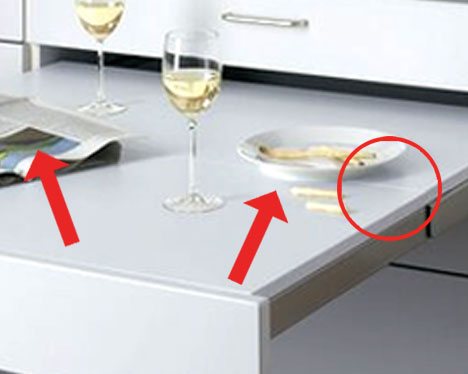 As you can see inside the circle, the faintest of reveals is visible, indicating the table's in two halves. My guess is the front half folds up and back onto the rear half for stowage. The two red arrows indicate where conventional leaf hinges (as seen below) might be, conveniently concealed in the photo by the dish and the newspaper.

However, as this piece of furniture is ascribed to German manufacturer Alno (though I could not find it anywhere on their site, probably due to the language barrier), I wouldn't be surprised if they used hidden hinges like this: 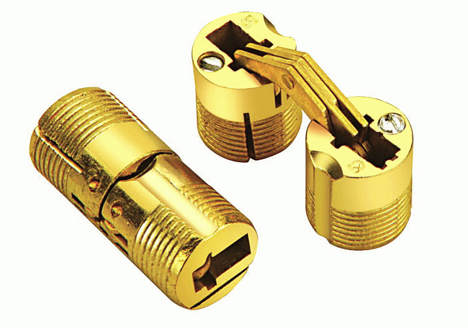 Those bad boys are inserted into simple holes drilled into the edges of each board, and then you join them like you're doweling them together. Hinges like that don't come cheap, maybe a hundred bucks U.S.Then there's the seating part. Sure, you can get 100-lb. capacity drawer slides, and with one on either side, could theoretically support your 200-lb. friend. But how are those drawer slides mounted? On your average Euro kitchen set-up, you've got tiny little screws biting into melamine-covered particle-board sides—something that would clearly end here with a very slapstick-like accident. 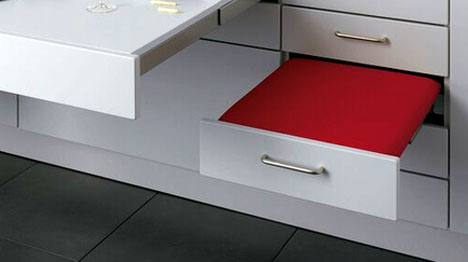 To our readers with design-build experience, how would you rig something like this if the client demanded it? In addition to using solid-wood or plywood sides that took screws well, my instinct would be to attach blocks above and below the drawer slides as added support—but the presence of a drawer directly above the seat drawer means that would interfere with the former's drawer slides. Any ideas? Do you reckon this whole thing is steel?

Alno's Pull-Out Dining: How'd They Do That? (Or: How Would You Do This?)