The problem with driving the same route, day after day, is that it becomes easy for commuters to stop paying attention. They know the route so well that they subconsciously tune out, ignoring signage both static and electronic, even when the latter is flashing danger warnings in big, orange letters.

Needless to say this can have deadly consequences, and the authorities in charge of Australia's Sydney Harbor Tunnel decided to do something about it after the following incident: "We had a fire in the tunnel," explains Harbor Tunnel GM Bob Allen, "motorists ignored the warning lights and signs and continued driving towards the fire. These drivers exposed themselves to smoke and toxic fumes from the fire and then to compound the situation they turned around (in a one way tunnel) and drove back out of the tunnel against incoming traffic."

Through a government-led R&D program, Tunnel administrators were able to contact Laservision, a creative technology firm that designs architectural lighting, permanent attractions and special events primarily for the entertainment industry. They teamed up with pump manufacturer Grundfos to create a HUGE stop sign that is impossible to ignore: It seems to materialize out of thin air, directly in front of your car. 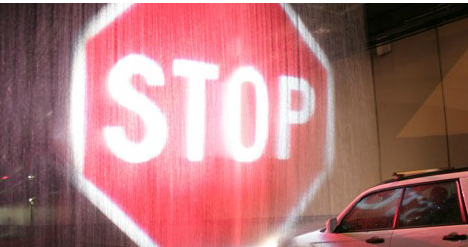 The Softstop, as it's called, utilizes a combination of pumped water and light projection. Watch it deploy: