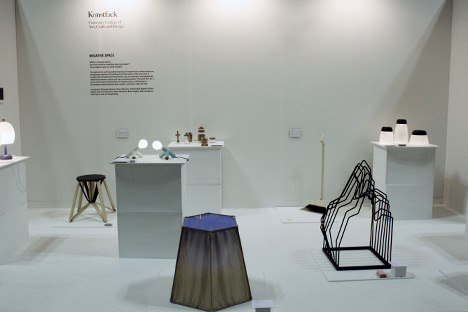 Stockholm's Konstfack is among the university design departments that occupy the removed North Building of the Javits Center this ICFF, a more manageable—albeit somewhat sparsely populated—exhibition hall in contrast to the main floor of ICFF. Despite—or perhaps because of—the largely theoretical curriculum of graduate programs in Industrial Design, the 11 first-year Master's candidates at Konstfack undertook a self-initiated project to actually make objects, which they first exhibited during Stockholm Design Week back in February. According to the Negative Space website:What is a negative space?
Can it be framed by something other than matter?
Can a negative space be made tangible?

Ten explorations on the possible meanings of negative space showcasing new and intriguing perspectives. By shifting focus from matter to the space that it occupies, the designers have found new ways of working by investigating the relationship between objects and the surrounding space. Presented here are a series of individual interpretations of negative space, culminating in a fascinating interplay between form, memory, movement, light and time. 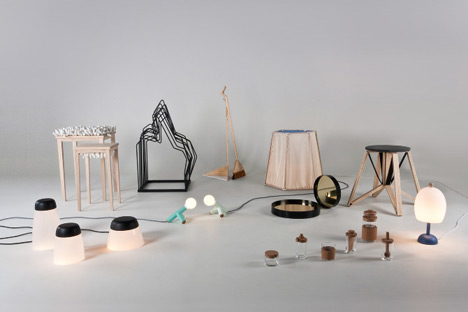 Insofar as the theme itself is intangible, the students took a broad range of approaches; even in the case of light, which might be considered an easy metaphor for space, the inspiration and execution varied significantly. Nevertheless, the overall aesthetic of the work is quite minimal, in keeping with both the theme and Scandinavian design language in general. 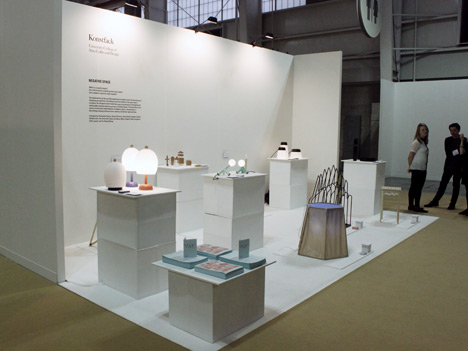 Unfortunately, the logistics of overseas travel and the tradeshow setting made for a somewhat attenuated exhibition—i.e. the convention center simply isn't the ideal context for exhibiting the highly conceptual work. (I find that the Javits Center, for all its cavernous, harshly-lit real estate, is something of a 'negative space,' if you'll excuse the pun.) In any case, the students were excited to be in New York—a first for many of them—and they were eager to share their work. 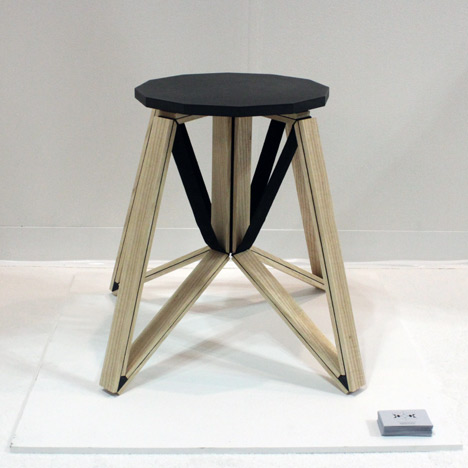 Daphne Zuilhof's "Spin" stool inspired friendly jealousy amongst her peers for it's packability. It takes it name not from the English verb but for the Dutch word for 'spider,' where its collapsible legs delimit a volume that is a usable space. 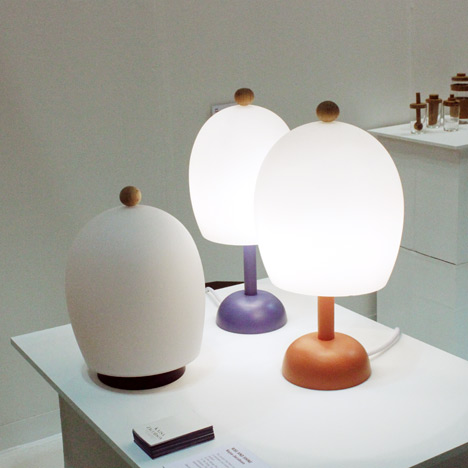 Kasja Jacobson's "Rise and Shine" lamp features a retractable shade for switch, a physical—or spatial, if you will—analogue for a touch-activated light source. 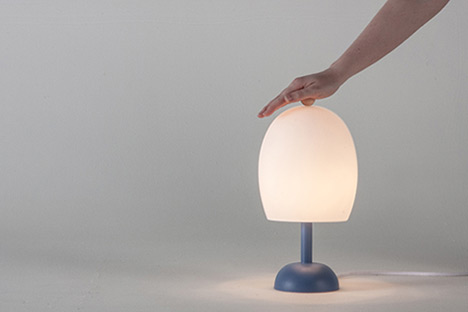 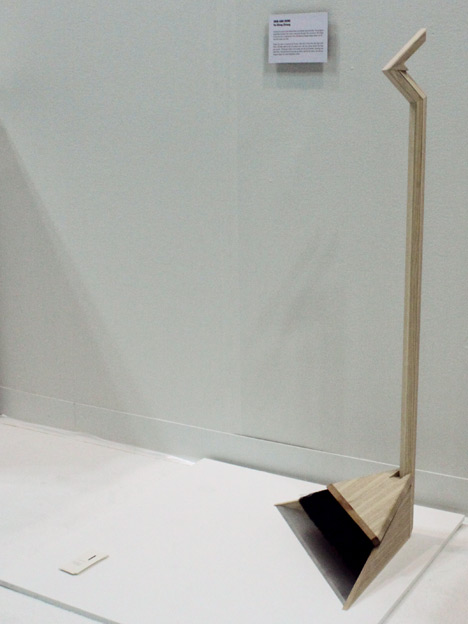 Yu-Ching Chiang's "Skin and Bone" is meant to fit into a corner, not only for storage purposes but also when in use, such that a user can simply sweep into the corner where the pan awaits. 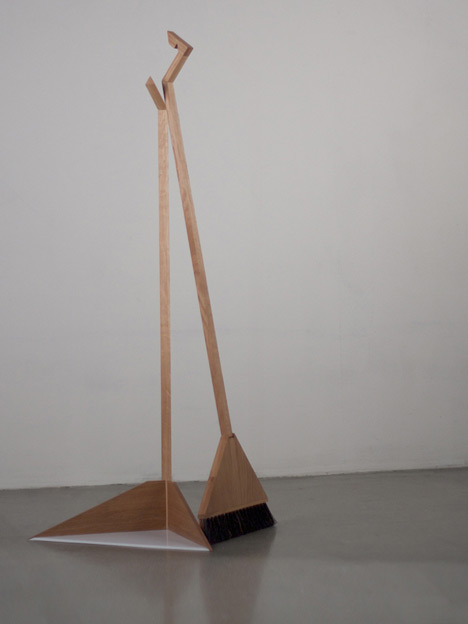 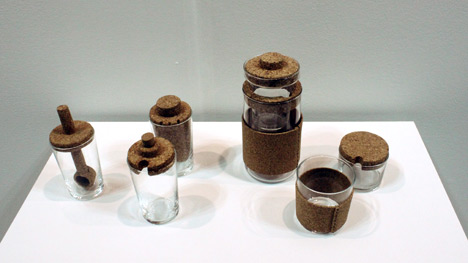 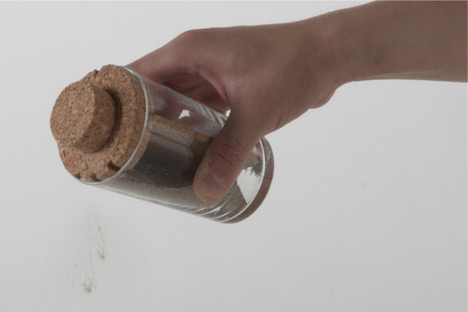 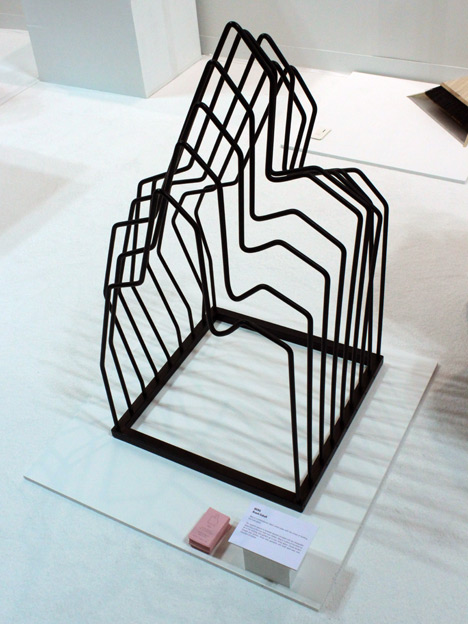 Arash Eskafi conducted a bit of ethnographic research in order to develop his project, discovering that the first thing that many people do when they get home is to shed a layer or two of clothing. The result is the "Berg," a metaphorical mountain that serves as a sort of modern valet. 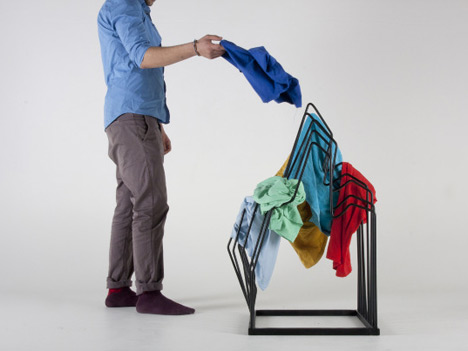 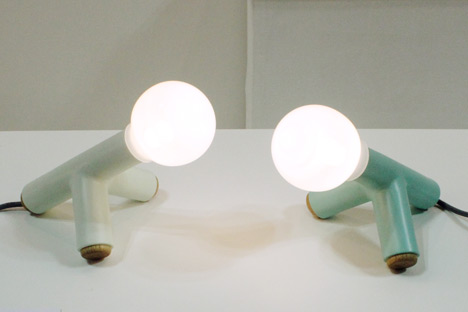 As its name suggests, the "Synapse" lamp by Alexandra Denton is based on the transmission of neurological information, in which electrical pulses travel across infinitesimal spaces. (The lamp's sculptural counterpart, pictured below, was too large to transport.) 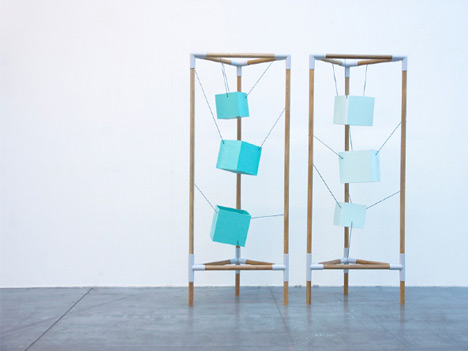 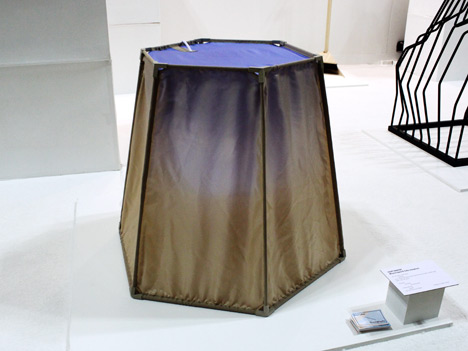 Maja Frögård and Sofia Josephson's "Light Habitat" evokes a temporary abode at scale, at once familiar and alien. The visible power cord interrupts the otherwise uncanny effect of the light emanating from the object, but then again, it's still a prototype. 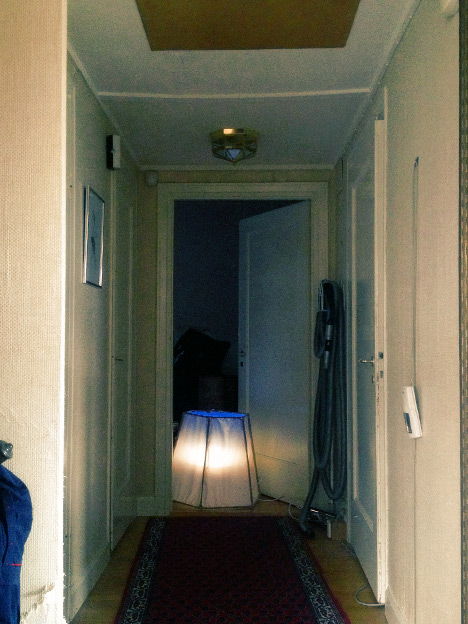 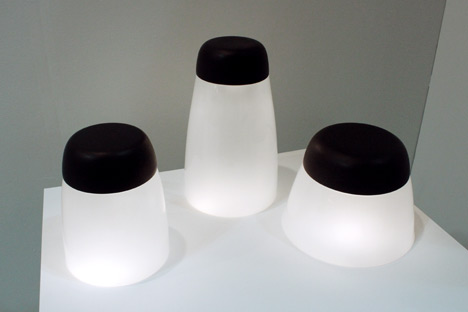 Sofia Lazzeri's "Beams" are intended to look like precisely that; the prototypes use halogen bulbs but she noted that she would prefer to use LEDs. 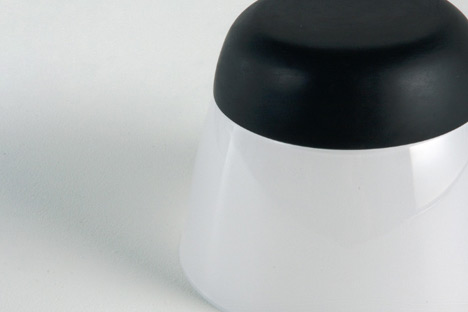 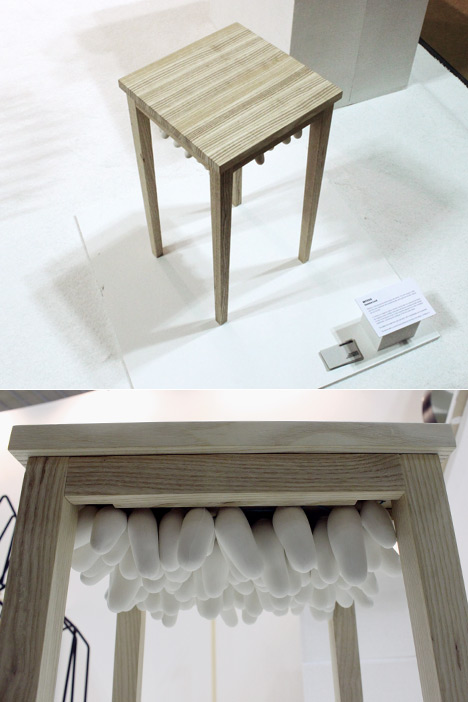 I was curious as to what the 'cells' dangling beneath Gemma Lord's "Mitosis" table were made out of; it turns out they're individual cast porcelain pods. As a representation of cell division, it's a bit abstract, but there's no denying the pleasant tactile and audio effect of running one's hand across the alveolar surface. I was also interested to see that the table's larger sibling has the same treatment on the tabletop to vastly different visual (and rather less functional) effect. 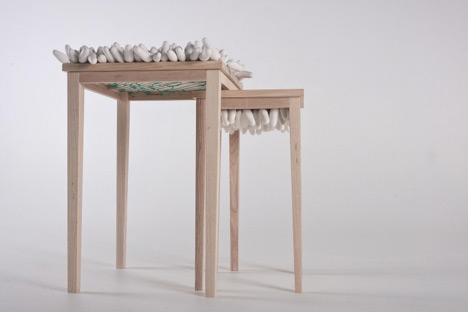 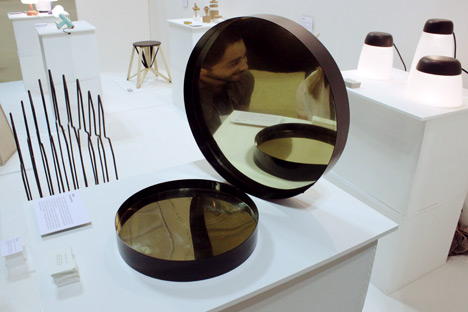 Last but not least, Iina Vuorivirta's "Noir" mirror comes in a larger third size, but she learned that she's better off sticking to the smaller ones for convenience of transportation. 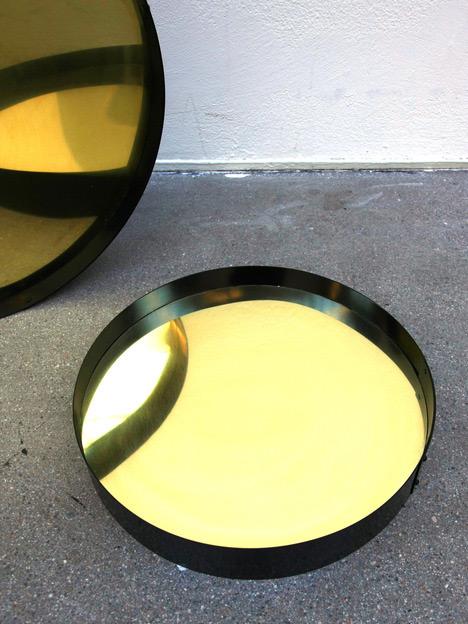 Congrats on the show and we look forward to seeing more your work in the future!