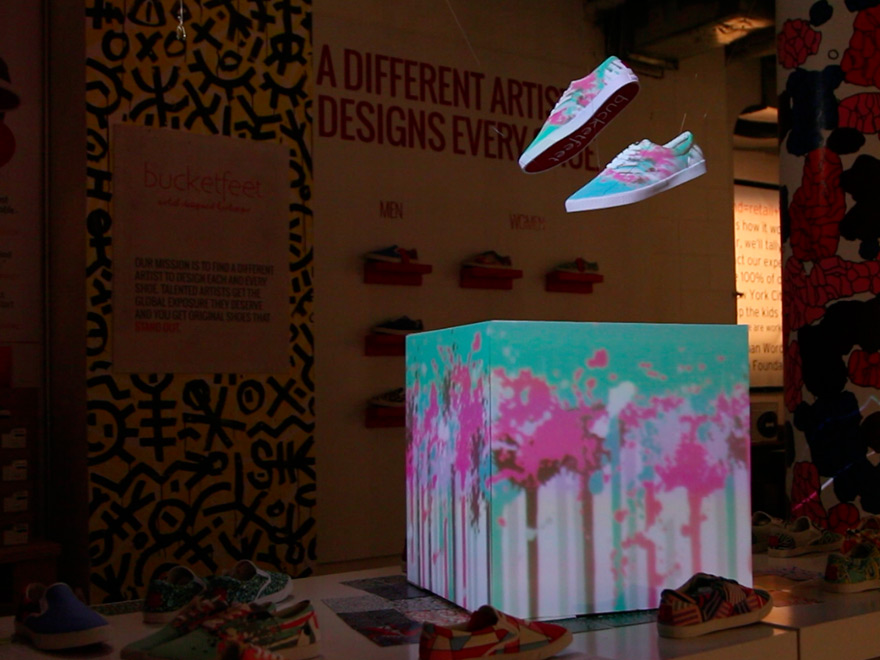 About two months ago, designer Craig Winslow II unveiled "illuminimal," a design concept that uses video projection mapping on a real footwear product to completely change the look of the shoes. Now, he's collaborated with BucketFeet to bring the concept to life as 'illumifeet,' an interactive evolution that's currently on display as part of a storefront pop-up shop in Treasure&Bond in Soho, NYC.

Winslow offered to elaborate on the process in his words:

I've been infatuated with video projection mapping for the past few years now. Seeing the way that light can completely change a building or environment is incredibly inspiring. However, many projection executions felt like tech demos to me. I wanted to create work with story, purpose and function. Although this new digital+physical medium is many years old, it continues to evolve and find its place in the world, and I wanted to contribute to its growth.Working on the industrial design team at JDK Design, a portion of our client work involved designing footwear, and we worked closely with the color & trend team. The idea to project different designs on a blank shoe came naturally, and I teamed up with two talented color designers, Josh Franklin and Jeff Yeager, to work on the 'illuminimal' project in our free time. Before sharing the concept at one of JDK's staff meetings, I set up in JDK's photo studio a few weeks prior while I tinkered, learned the programs, and discovered my process. 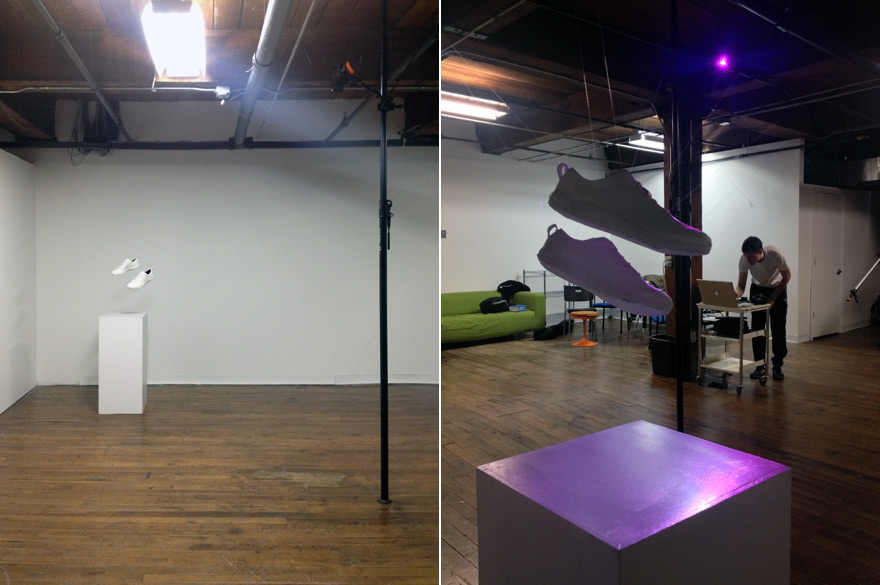 We worked full time upstairs during the day, and then in the photo studio into the night. Not once did it feel like work, and on a couple of occasions, I stayed up all night out of excitement for the project. There was no money or fame involved, just a shared passion for making something we were really excited about.

The 'illumifeet' installation utilizes two programs: Modul8 to mix video and MadMapper to map it through the projector onto the floating shoes and base. Projector placement was important to make sure the sides of the cube are evenly lit, with the shoes high enough that they won't cast a shadow on the pedestal. At the Treasure&Bond/BucketFeet launch party, I carried around an iPad with a custom TouchOSC interface to control the display, similar to the one I made to VJ 'illuminimal.' 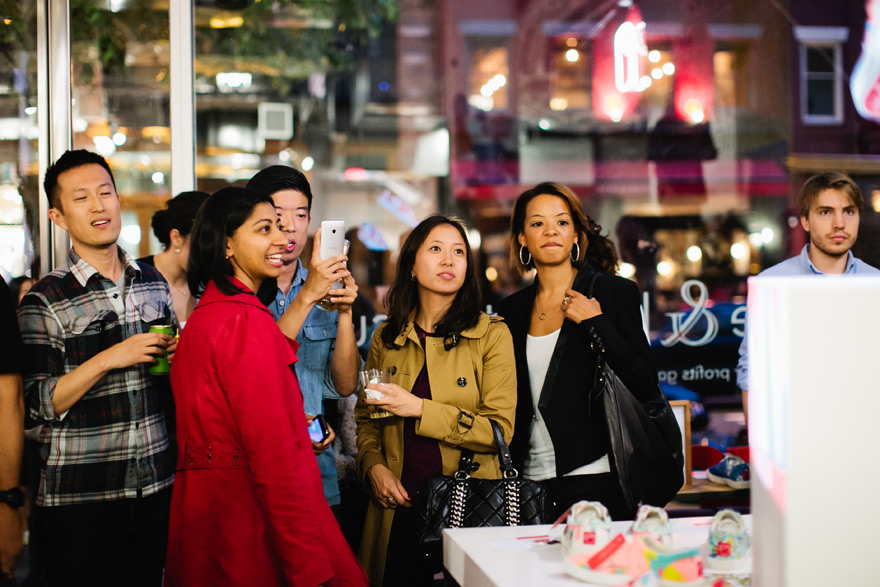 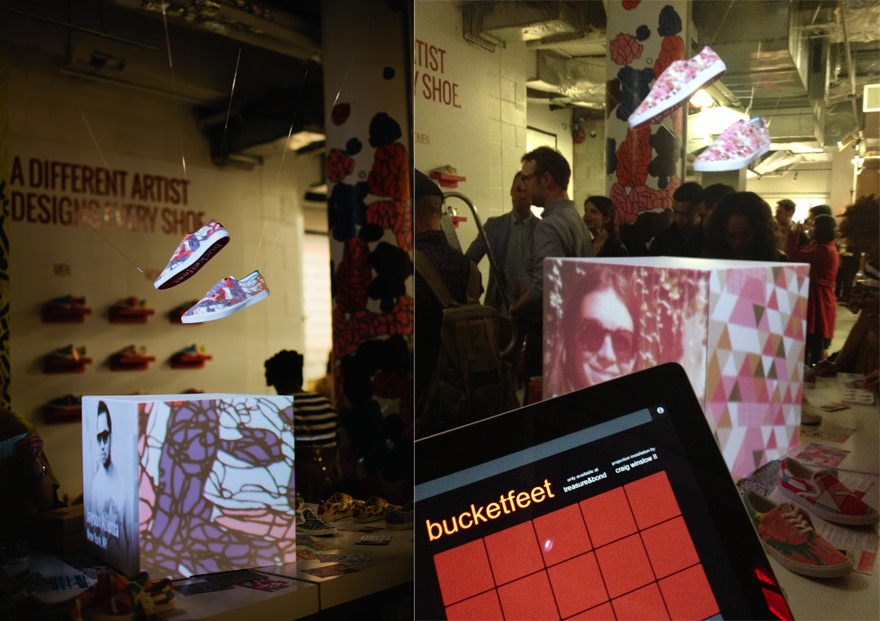 To evolve the 'illuminimal' concept, I enlisted the help of my good friend Justin Kuzma to develop a custom interactive component. Combining a SparkFun RedBoard, MIDI shield and infrared proximity sensors, we created a device to trigger animations in Modul8 as viewers approach the storefront. It's been a growing trend to pursue interactive displays in retail, and this collaboration with BucketFeet at Treasure&Bond was a great example of showing how versatile projection mapping can be in a pop-up shop format.

This little 'illuminimal' passion project turned into the catalyst for me to start my own company, allowing me to fully focus on pursuing these side projects I have such a passion for. I look forward to collaborating with companies and individuals, while continuing to experiment and self-initiate design projects of all sorts.

Although the technology behind this project is relatively simple, it was in the exploration, playing, and doing something just for the sake of doing something we were excited about, that led to a fresh execution. 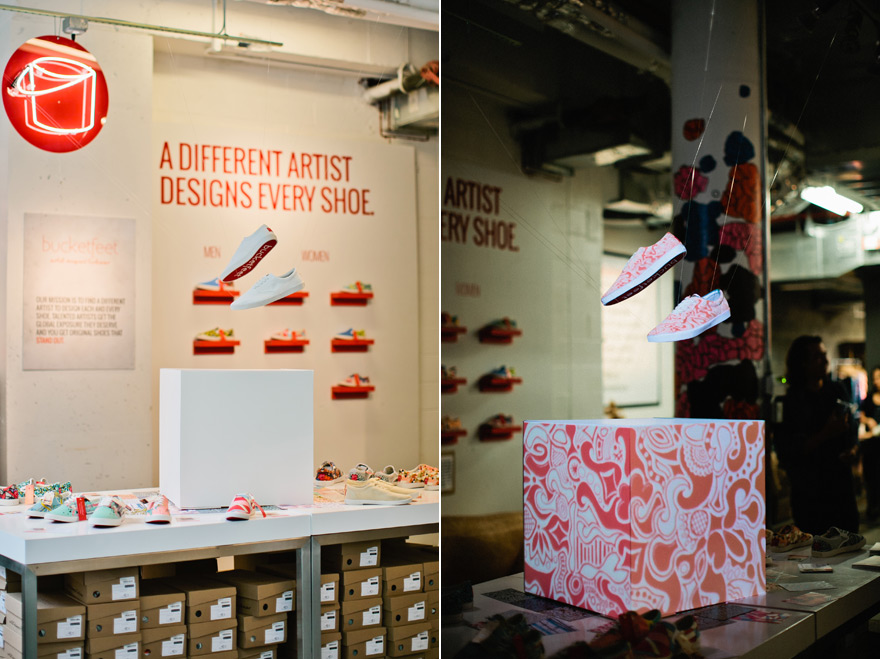