Light by Fire Extinguisher & the Anti-Incendiary Grenades of Yore 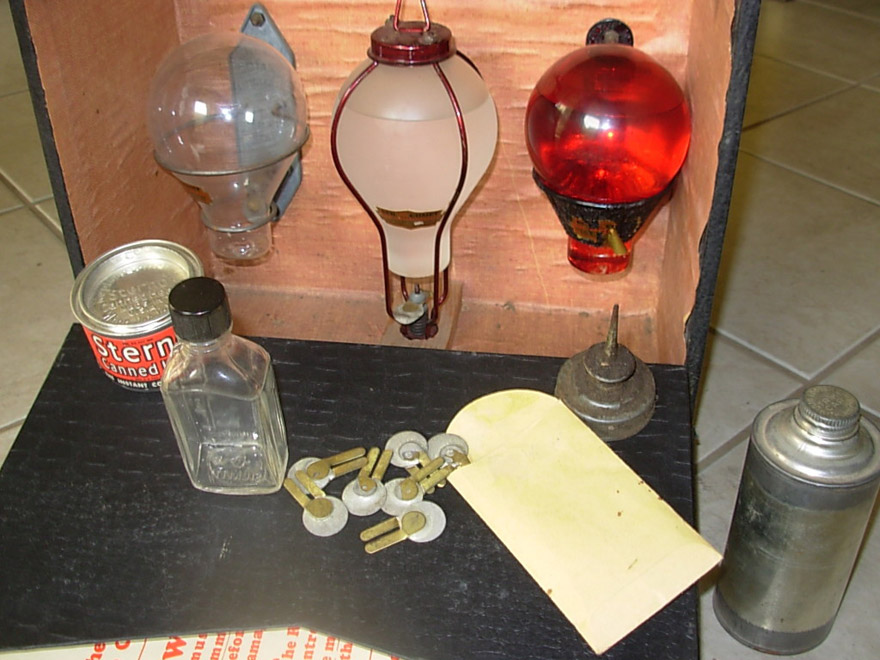 Red Comet salesman kit, via Collectors Weekly—looks cool, but what does it actually do?

You know how words like 'ingenious' and 'inflammable' actually mean the same thing as 'genius' and 'flammable,' respectively? It so happens that the object known as a "fire grenade" has a similarly paradoxical name: it's a glass vessel containing an extinguishing agent, intended to be thrown at the flames—in the same manner as the projectile weapon—in order to put it out. 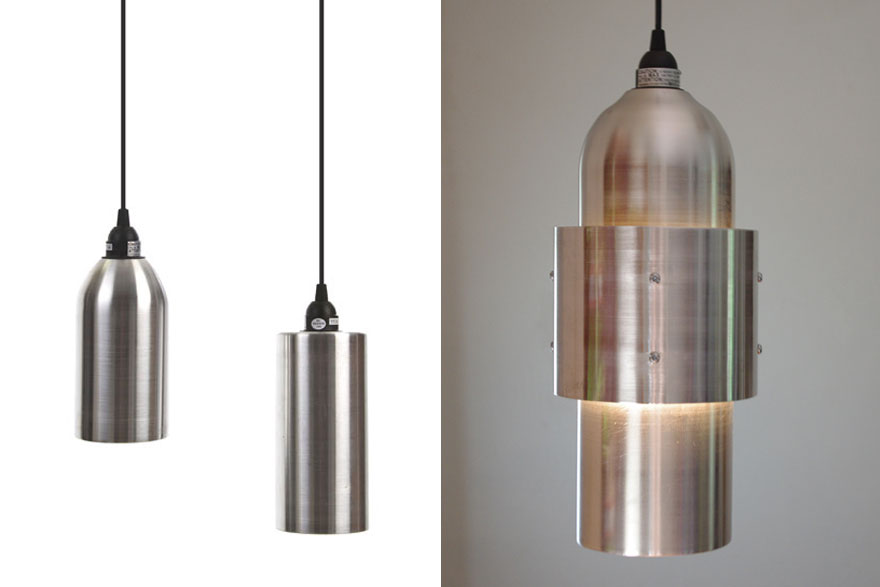 But before we get into the "more-than-you-ever-cared-to-know" segment of this post, it's worth mentioning that a couple of strikingly similar blog submissions inspired (or sparked my interest, if you will) my inquest into fire extinguisher history. Southern Florida-based artist Valentino Llegada has taken to upcycling the aluminum canisters into household objects, namely vases and pendant lamps. Seeing as manufacturers and fire departments alike typically recommend replacing them annually, the raw material is essentially an alternative to recycling non-refillable varieties of extinguisher (actual shelf life may be over a decade for dry chemical extinguishers; compressed gas extinguishers may develop slow leaks within a year). 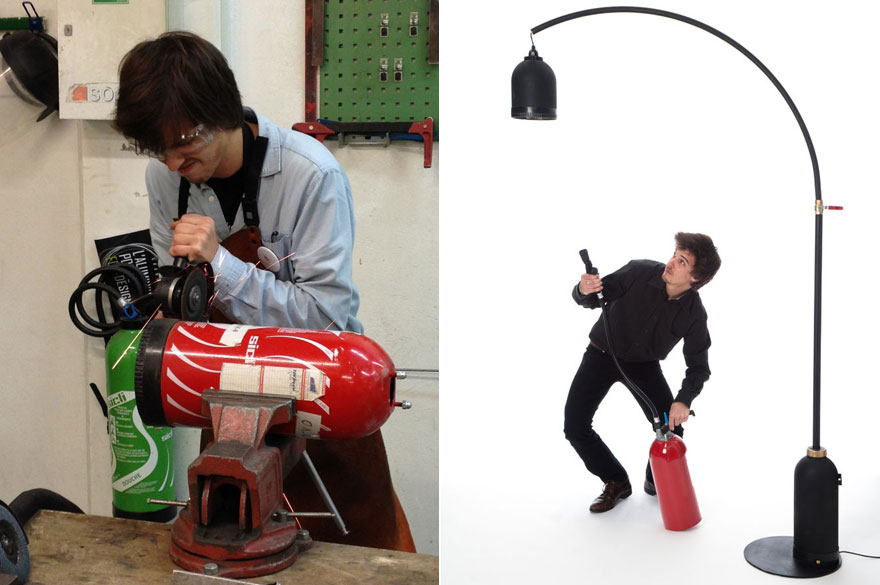 Samuel Bernier's project, on the other hand, is a bit more robust: the DIYer extraordinaire recently posted a detailed Instructable for a fire extinguisher floor lamp, which he created with the help of ENSCI students Sarah Khoubbaz and Rim Besbes during a workshop called "Lounge Share." We've seen homages to Achille Castiglioni (namesake of Bernier's project) before, but this upcycled tribute neatly conflates the iconic forms of an oft-overlooked safety item and an objet d'art. 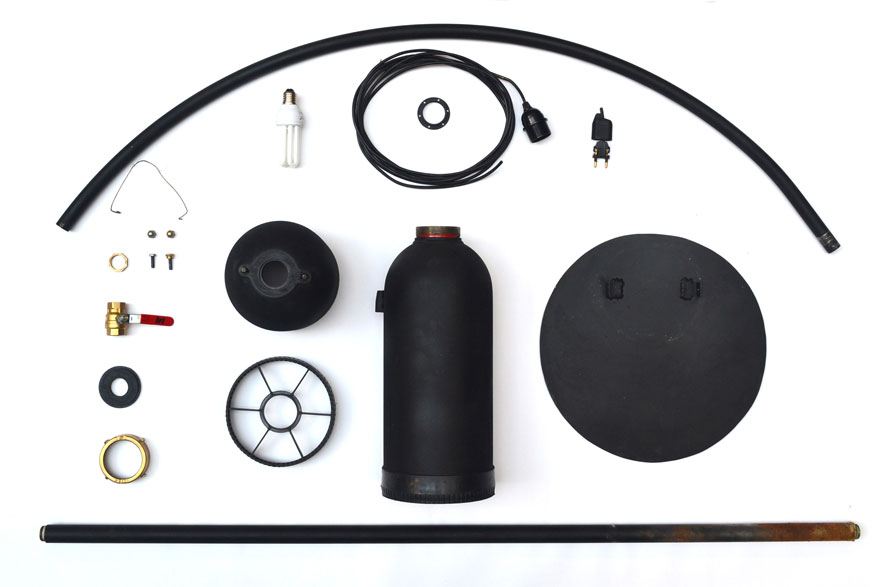 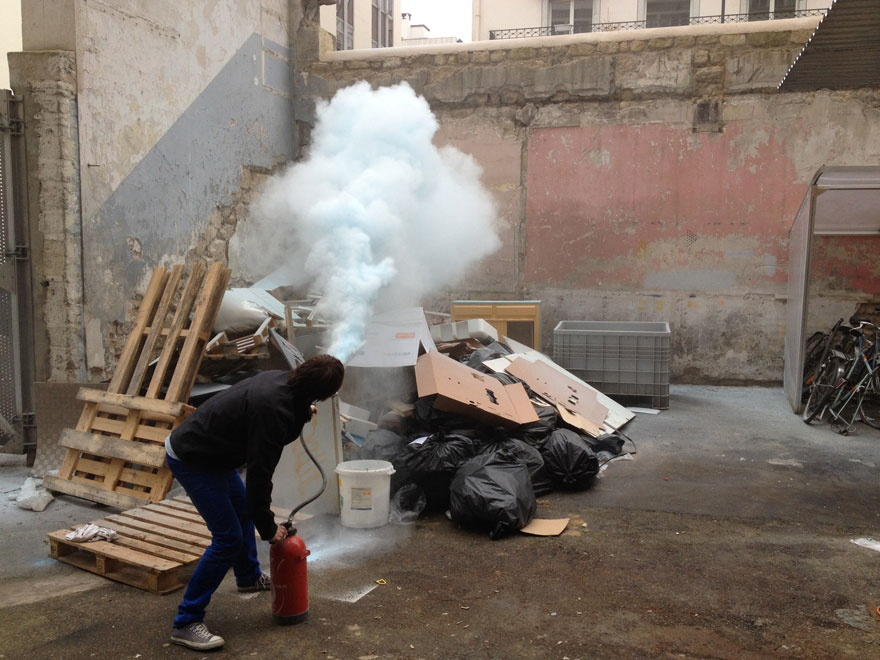 Besides the actual design and fabrication process, Bernier notes that the extinguishers must first be fully discharged, advising fellow DIYers to "try not to breathe the fumes. I don't know if it's toxic, but it can't be good." His hunch is correct if he happens to be spraying now-prohibited halon gas, but other extinguishing agents are generally considered to be non-toxic. 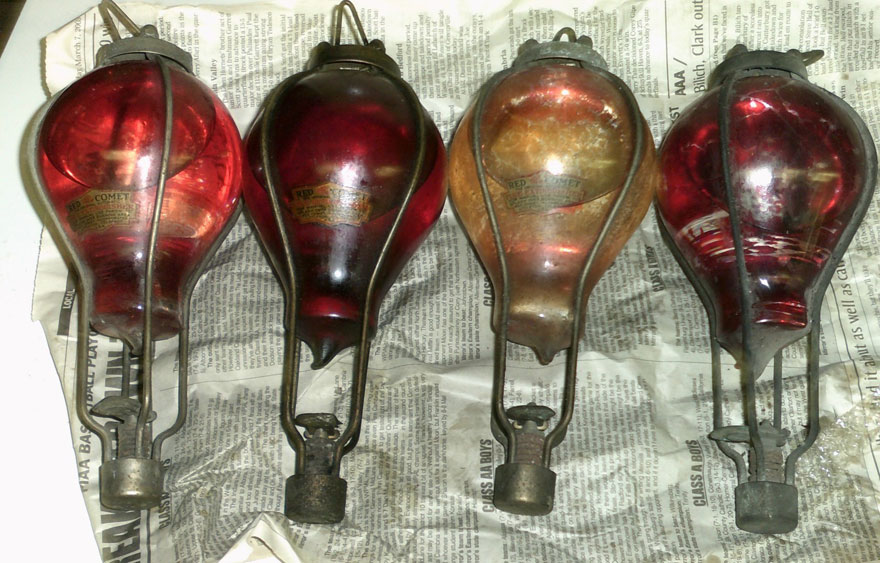 Which brings us back to the fire grenades of yore—5–8” glass vessels with a vaguely familiar shape that belies their typically toxic contents, bottled over a century ago. The collectible objects resemble small vases, perfume bottles or lightbulbs (i.e. any glass vessel with a narrow neck atop a bulbous body), where the teardrop shape serves two purposes: the neck allows the vessel to sit in the mounting hardware, typically a wall-mounted ring, as well as handling (à la the baton-like stick grenade, which, interestingly, was developed after the fire grenade, during WWI).

In any case, collectors are advised to use caution when handling fire grenades; an anecdotal account of a hazmat-worthy incident illustrates why eBay sellers will typically denote whether or not the bottles are empty; specifically, if they may contain 100+ year-old carbon tetrachloride (CTC), the toxic active ingredient in the majority of mass-produced fire grenades from that era. (Interestingly, the same article later notes that drained grenades are of less interest to collectors.) Besides its use as an extinguishing agent, CTC served various purposes throughout the 20th century, from refrigerant (it's also known as Freon 10) to dry cleaning and for pest control—until it was banned for good in 1970. 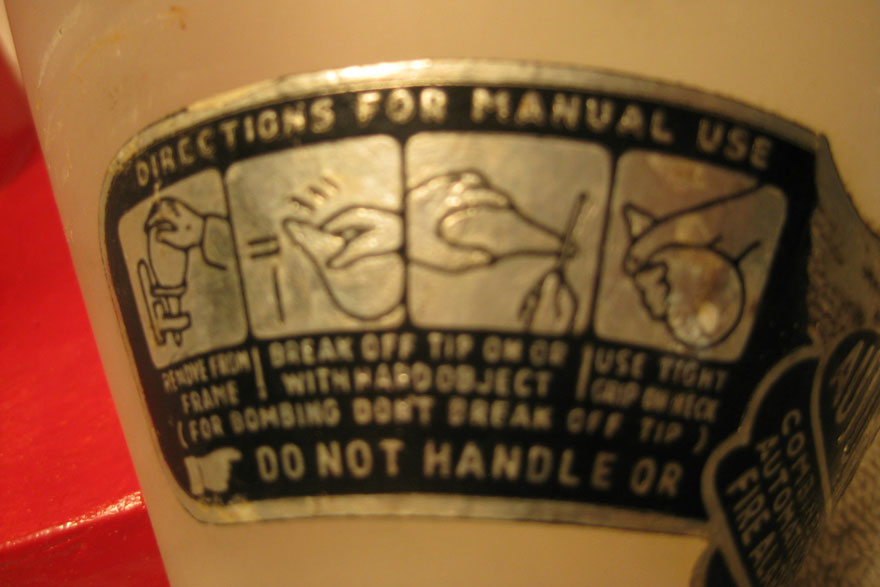 Of course, neither the general populace nor the scientific community was aware of the danger of exposure to CTC, and it proved far more effective than the saline solutions and other alternatives of the late 1800s. Different sources cite different dates, but consensus is that fire grenades became fairly commonplace by the turn of the century but were quickly phased out within the first decade of the 20th century, in favor of the metal-barrelled, propellant-based extinguishers that we use today. In fact, this design predates the grenade: it was originally invented by Captain George Manby in 1818; according to Wikipedia, "it consisted of a copper vessel of 3 gallons (13.6 liters) of pearl ash (potassium carbonate) solution contained within compressed air." (Wikipedia also relates that the first documented extinguisher dates back to nearly a century prior, when chemist Ambrose Godfrey developed an exploding "cask of fire-extinguishing liquid"—I'm picturing something like a mini-watertower with a remote detonator.) 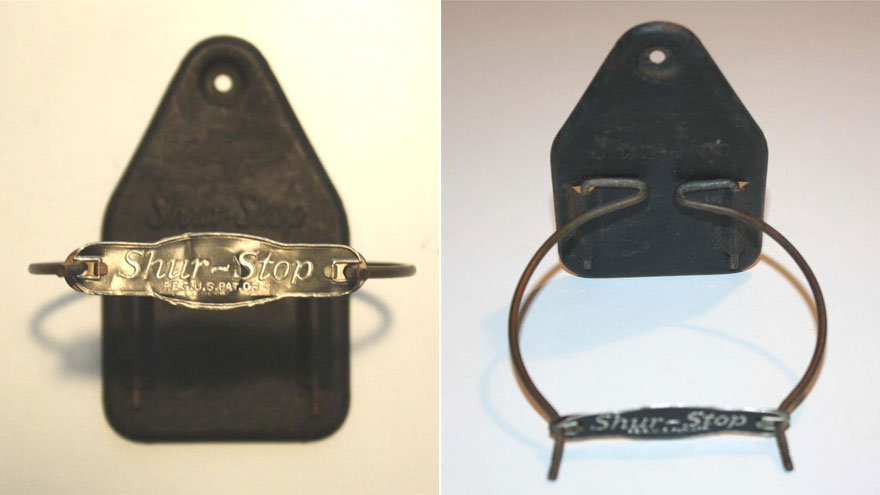 Among the more interesting details of the fire grenade mechanism is that the mounting hardware was designed to melt at a relatively low temperature, such that flames would trigger impact in order to release the chemical contents of the grenades. As with mason jars, the sealing mechanism was a critical innovation: the cork was often cemented into place (and sometimes further enclosed with foil) in order to contain the highly volatile substance within.(Victorian-era folks had to pick their poison, so to speak, when there actually was a fire: CTC may react to heat by becoming phosgene, a WWI-era chemical weapon.) 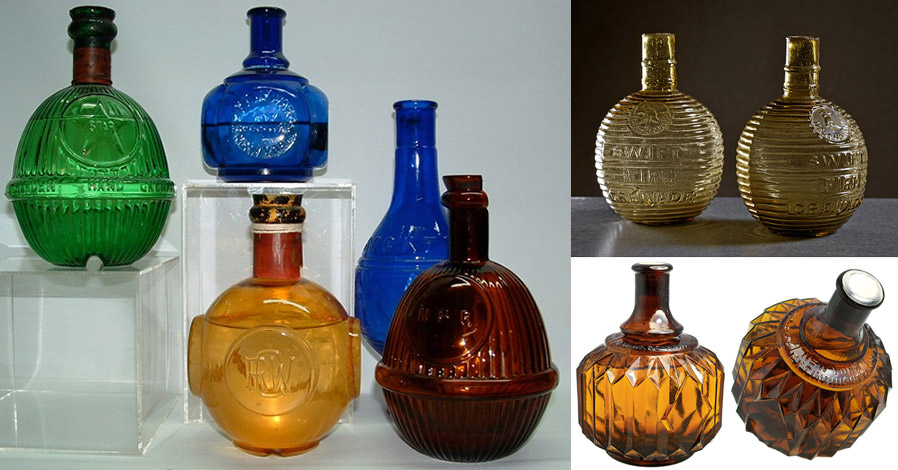 Seeing as fire grenades became a common fixture in "homes, hotels, factories, schools, trains and other commercial buildings around the turn of the century," they were intended to look like a decorative element. Hence, the range of coloration and detailing of pre-20th century examples and the wall sconce aesthetic of the later mass-produced varieties. Per a 2008 article on fire grenades (from the "Southern Jersey Life" section of NJ.com, of all places): "Some of the companies that produced glass fire grenades were the Harden Hand grenade, W.D. Allen Manufacturing Company, Fire Extinguisher M.F.G. Company, Acme Fire Extinguisher, Comet, Hayward, Babcock, Harkness and Little Giant. Many of the glass grenades were embossed with the manufacturer's name."

The previously-cited Antique Shoppe Newspaper article enumerates a bit of trivia and distinguishing marks of several of these brands ("Harden manufactured a rare grenade in 1889. This grenade was made in three separate sections and was held together with wire..."), concluding with some pro tips:Bottles can be found in many places such as farm houses, local auctions, under porches, basements, attics, old homes, flea markets, antique shops and antique bottle shows. You can dig in the trash pit or privy of an old house. Over a hundred years ago it was common practice to throw garbage into the privy or local trash pit. The most rewarding digging can be found in the East where most of the glasshouses were first settled. The Western States also have an abundance of good digging areas, which can be attributed to the gold rush in the late 19th century. 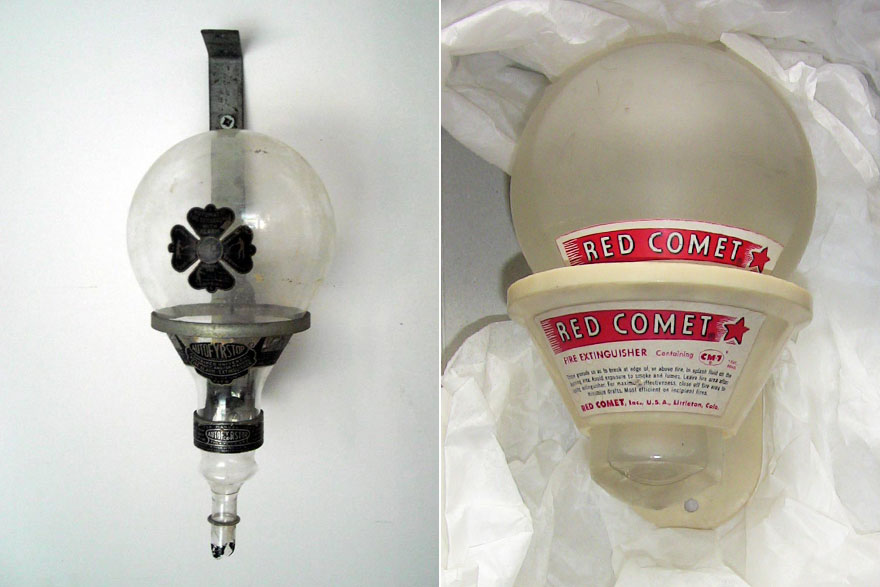 I was also interested to learn that at least one company is producing a contemporary version of the fire grenade. The Nagekesu SAT119 works just like an old-school Red Comet or Auto-Fyr-Stop extinguisher, except that the (proprietary?) compound isn't toxic. (The video inevitably evokes some kind carnival game, in which hapless rubes are instructed to douse the flames with their so-called "fire grenades" in order to win a prize.)

Lastly, it so happens that we posted a more fanciful 'grenade launcher' extinguisher a few years back. Guess it didn't catch on.

See also: Tradition vs. Progress: The Art of the American Fire Helmet

Light by Fire Extinguisher & the Anti-Incendiary Grenades of Yore