In the early 1980s, Frenchman Franck Goddio was working in finance. But rather than searching for treasure in spreadsheets, he began looking elsewhere: underwater. With a passion for underwater archaeology, Goddio quit his finance gig, founded the Institut European d'Archeologies Sous-Marine, and started searching for shipwrecks. 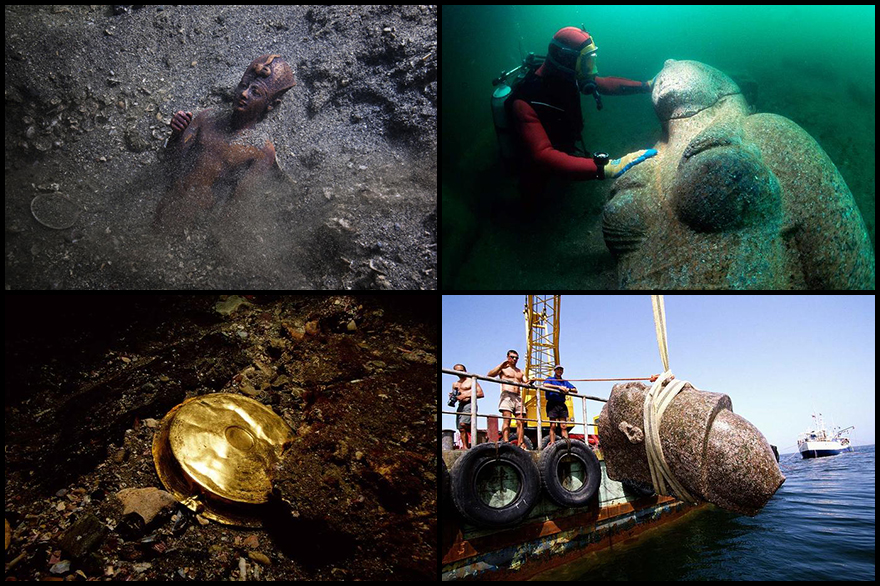 His results were impressive. Goddio excavated Spanish galleons, trading ships from the British East India Company, and Napoleon Bonaparte's flagship, among others. But it was an expedition he undertook in 2000 that really put him on the map, so to speak: He managed to locate Thonis-Heracleion, an ancient port city (built circa 800 B.C.!) that's now completely submerged off the coast of Egypt. The hyphenated name hints at its cosmopolitan nature: The Egyptians called it Thonis, the Greeks, Heracleion after a massive temple to Heracles that once stood at the site.

Thonis-Heracleion went into the drink circa 800 A.D., having lived a long, 1,600-year life. And what's astonishing about the artifacts Goddio has recovered is how well they are preserved. Apparently the seabed floor has done a good job of protecting the statues, steles, housewares, plaques, and even gold coins Goddio and co. have found.

Getting all that stuff topside isn't easy, and they use a combination of airbags—think helium balloons on steroids—and ship-mounted cranes.

One big question is why the city sank in the first place. Historians theorize that during an earthquake it fell into the ocean under the weight of its own structures. Pish posh, we say—anyone who's seen Clash of the Titans can tell you the inhabitants probably did something to piss Poseidon off.