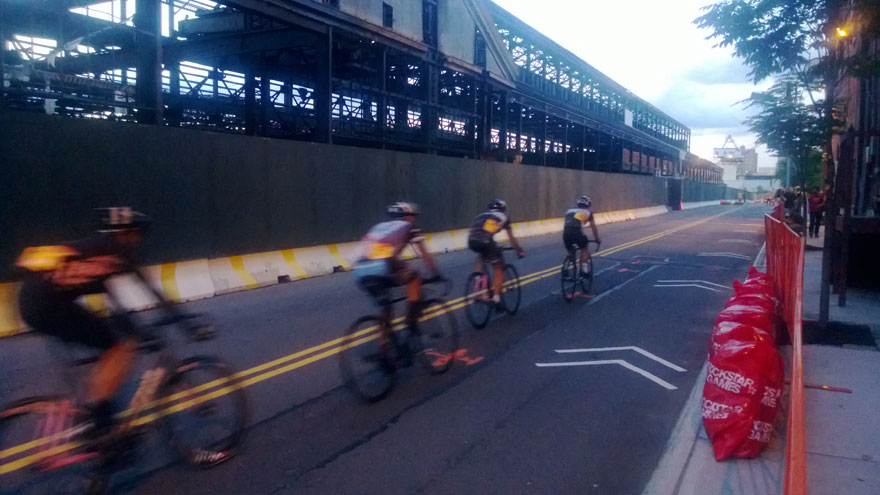 Core77 is pleased to partner with Windows Phone to bring you a series of photo diaries this summer. Based on the theme of Reinvention, we're looking to capture the fleeting moments and highlight the often-overlooked facets of the world around us through the lens of the Nokia Lumia 928, especially in the low-light settings in which its camera excels. (All photos were taken with the Nokia Lumia 928 smartphone and are published without postproduction unless otherwise noted.)

Like the Bicycle Film Festival, the Red Hook Criterium has become an annual highlight for the NYC cycling community in just a few short years since its inception. In the five years since the inaugural race—a birthday celebration for local cyclist and race organizer David Trimble—the event has quickly evolved from an unsanctioned race in an oddball industrial corner of Brooklyn to a multinational Championship Series, thanks largely to title sponsor Rockstar Games.

Of course, the sheer logistics of organizing a criterium on city streets aren't quite as scalable as a grassroots film festival, and the fact that the series expands to two new locations this year is a testament to Trimble's hustle. In addition to the OG event in Red Hook, he introduced the RHC Milan in October 2010; these two events bookend this year's Championship Series, which also includes two new events: last weekend's crit in the Brooklyn Navy Yard, documented here, and a penultimate race in Barcelona in August.

The white balance was set to auto; the photo on the left is slightly warmer, but both turned out quite well. (I switched to Night mode for the race itself.)

I would have liked to attempt to shoot the event on a DSLR, but considering the sheer difficulty of shooting 1.) bicycles 2.) in motion 3.) at night, I realized that the race would be the perfect opportunity to put the Nokia Lumia 928, running Microsoft's Windows Phone 8 OS, to the test. 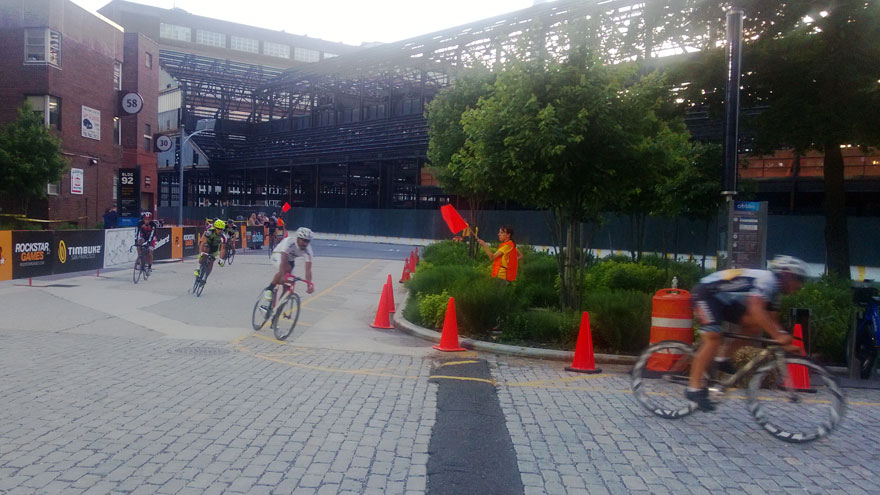 A staff member mentioned that the cobblestones were an homage to the first Red Hook Crit, which also had a cobbled section.

But first, a bit of background, for the uninitiated: a criterium is a specific variety of bicycle race that typically occurs on a short, highly-technical circuit on closed-off city streets. The Red Hook Crit is unique in that riders are required to ride brakeless track (i.e. fixed-gear) bicycles, making it a unique hybrid of velodrome cycling and alleycat races: the course at the Brooklyn Navy Yard featured several near-90° corners, a cobbled chicane, and a killer S-curve that proved to be the downfall of many a contender. That, and the fact that the race takes place at night, per tradition. (Racing Towards Red Hook, a short documentary about the 2011 RHC, is a good primer). 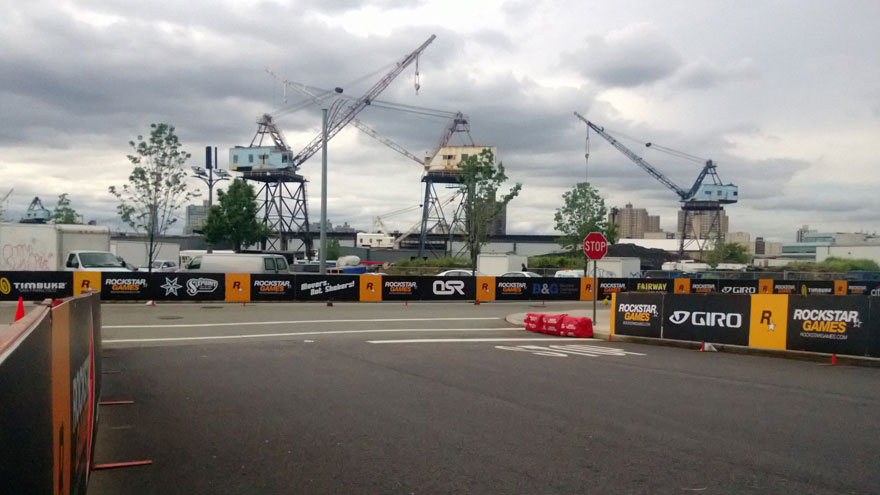 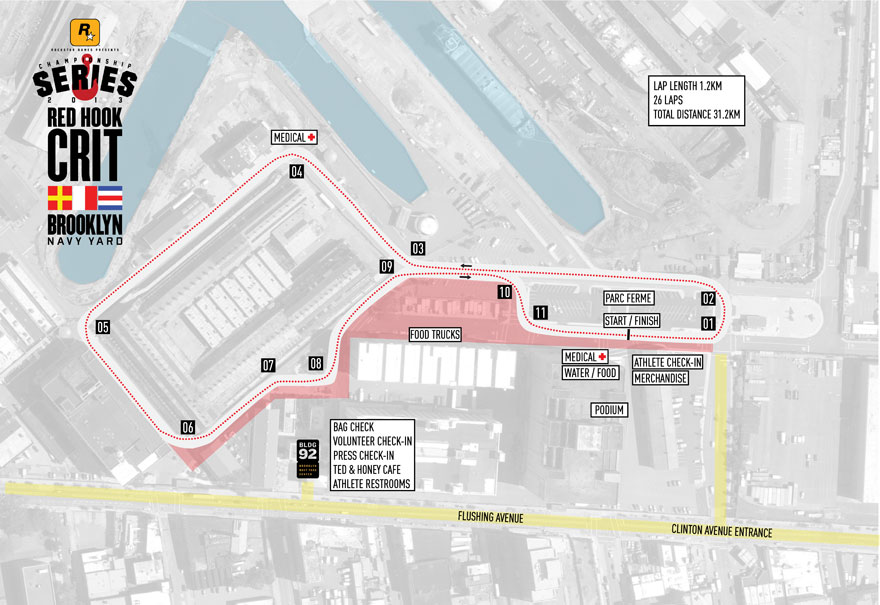 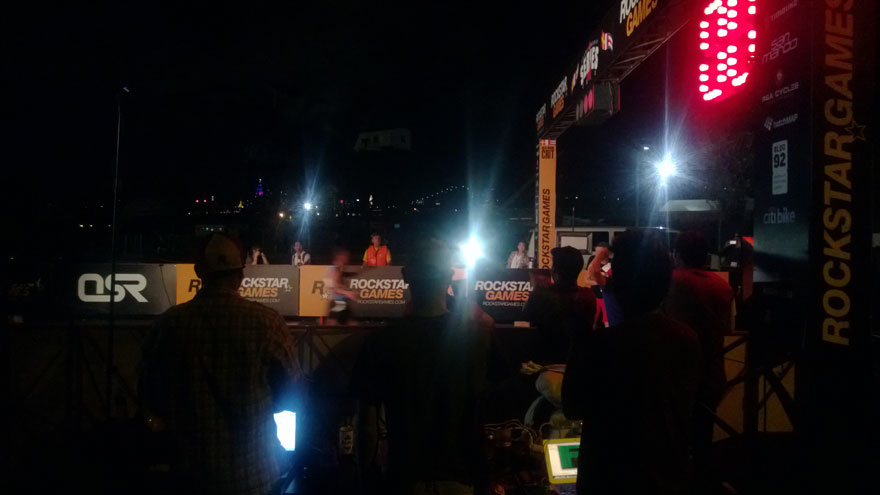 The finish line during the 5K

Over the past five years, Trimble's race has grown to attract competitors from all over the world, from longtime bicycle messengers to categorized professional racers and even a few Olympic cyclists to boot. The festivities have also expanded to include a 5K, run on the same 1.125km course after the sun has set but before the main event. The footrace serves to break up the cycling events: although upwards of 200 riders may register for the race, only half of them ride in the Crit itself—registrants qualify by clocking one of the top 100 "flying lap" times in one of three preliminary heats. (Cyclists are split into groups according to their rank, with top-seeded riders in the last group; they have 30 minutes to record their fastest time on a single lap and determine their starting position.) 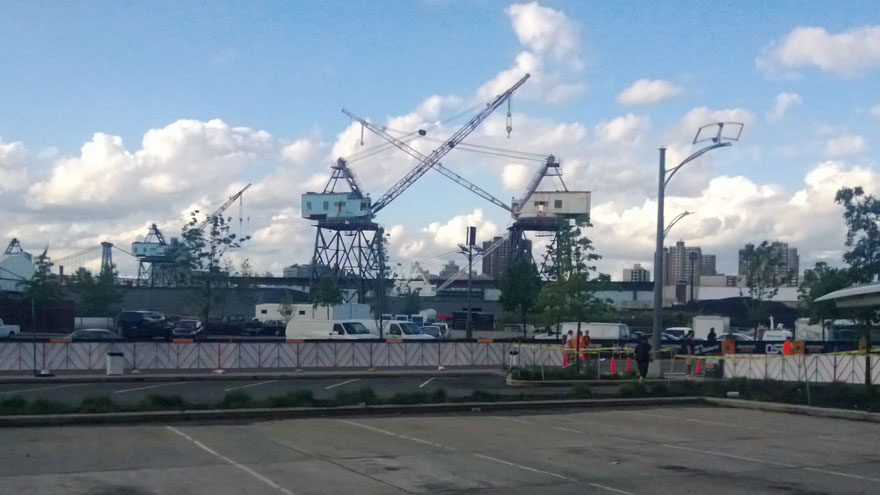 The Brooklyn Navy Yard is usually closed to the public 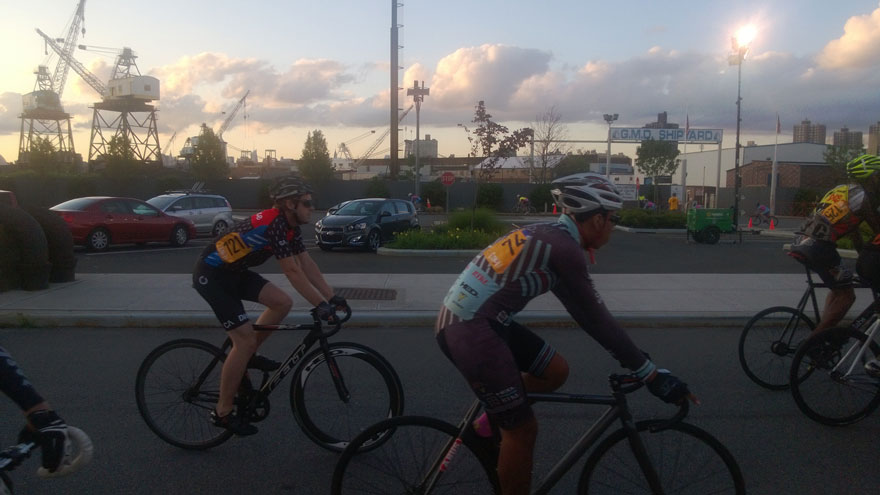 Qualifying Group 2, off to the races

The qualifying rounds at the Brooklyn Navy Yard started at 6pm on Saturday afternoon, just as the clouds cleared and mugginess gave way to absolutely perfect weather for a bicycle ride. With the summer solstice just a week and a half away, the long daylight hours afforded excellent atmospheric lighting, even as the floodlights came to life during the much-belated third qualifier. 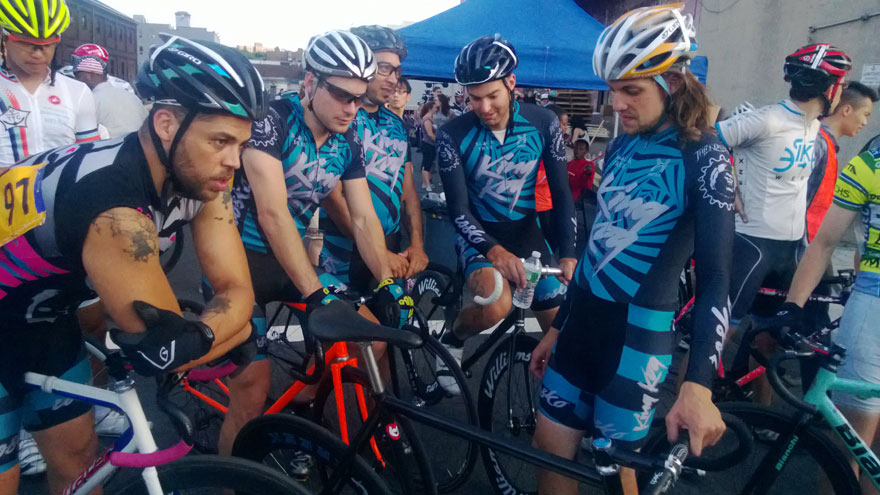 Fifth-place finisher Cooper Ray (wearing white and orange helmet) shows off his custom Rosko track—frankly, all of the bikes were absolutely dialed. 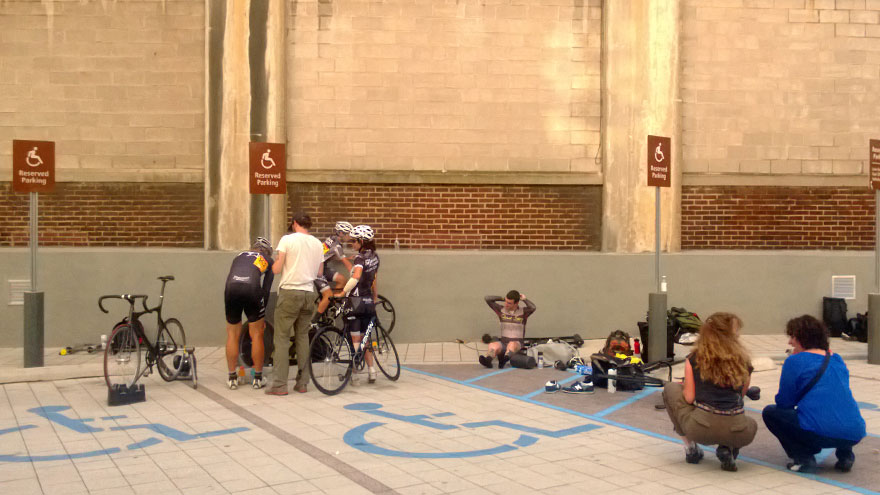 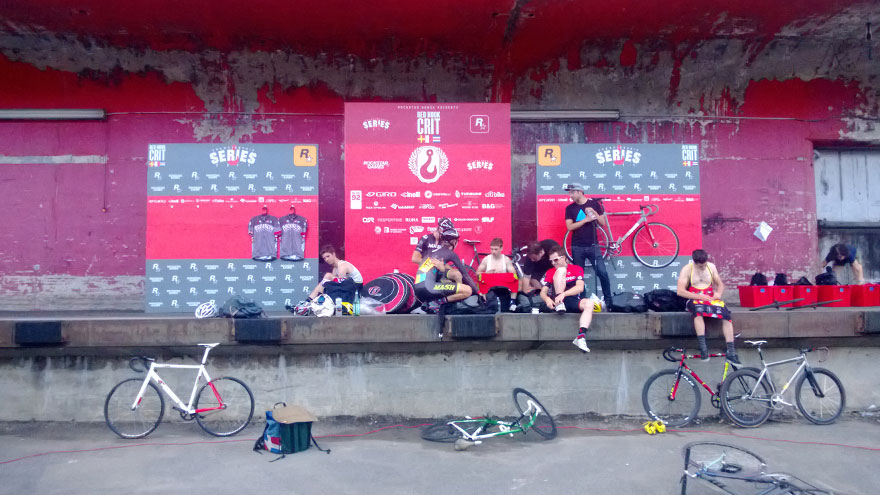 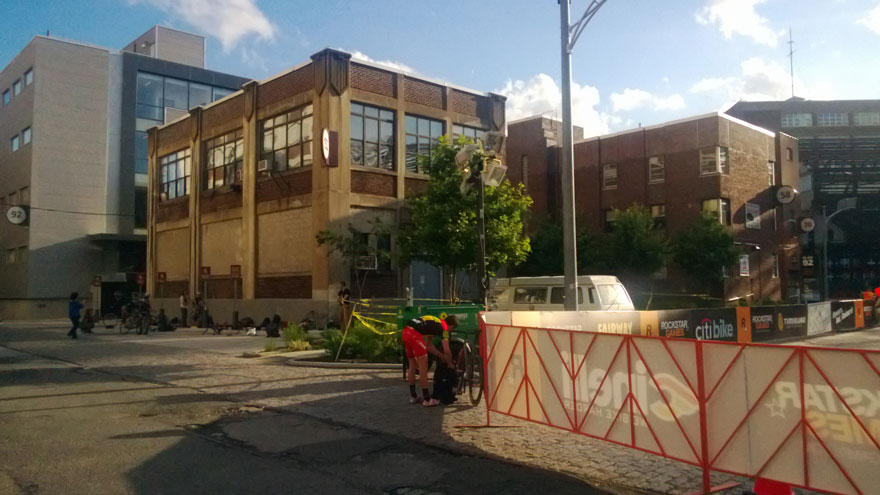 According to the original schedule, all three of the preliminary groups were supposed to take place long before sunset, but it took all of 20 minutes for a rider in the first group to succumb to the extremely technical course. A friend who witnessed the wreck was so shaken up that he had to sit alone for several minutes to regain his composure: apparently, the rider took the first turn of the S-curve wide and lost control, careening into the barriers and slicing his face open. Various accounts of the horrific accident quickly spread throughout the staging area as the 160+ other registered cyclists nervously milled around the staging area; I eventually learned that they had to wait for the ambulance to return before they could continue. (Josh Hartman is stable since his trip to the ER for his collapsed lung and facial injuries, but he will require several costly operations; help him out on GoFundMe.) 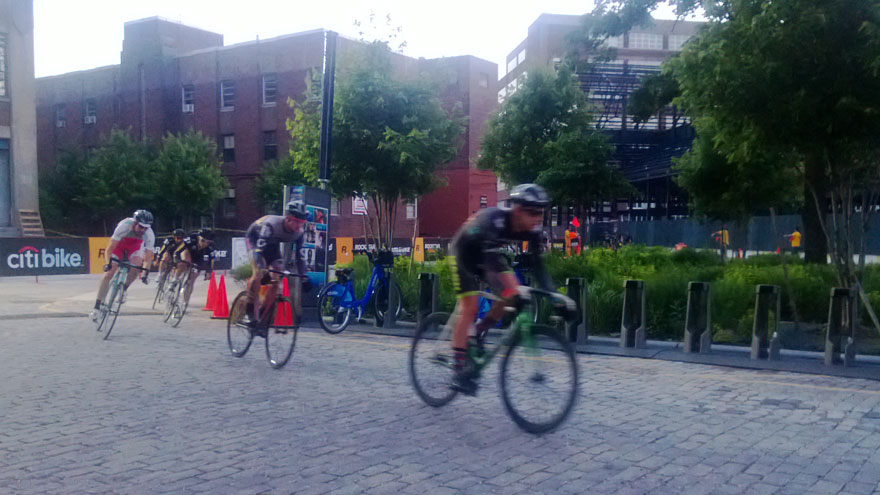 From left to right: John "K-Tel" Kniesly has finished in the top ten several times, including podiums in '09 and '10; Marc Marino was the dark horse; Kyle Murphy would have his best ever finish, second to the man in the photo below 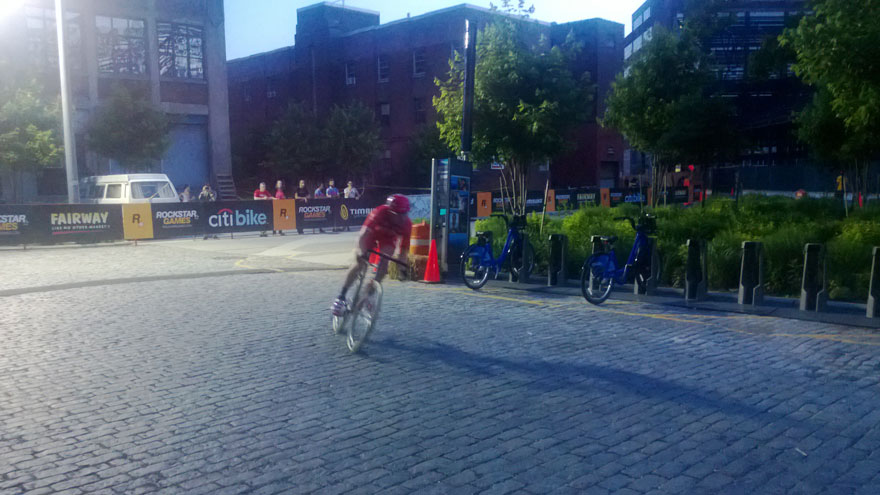 The qualifiers resumed an hour and a half later, with the first group finishing out their final ten minutes, followed by the two latter groups in the waning daylight. The Crit itself, which had been scheduled to start 9pm, didn't start until about 10:20, but the crowd remained in high spirits throughout the evening despite the tragedy that the afternoon and the crashes to come. 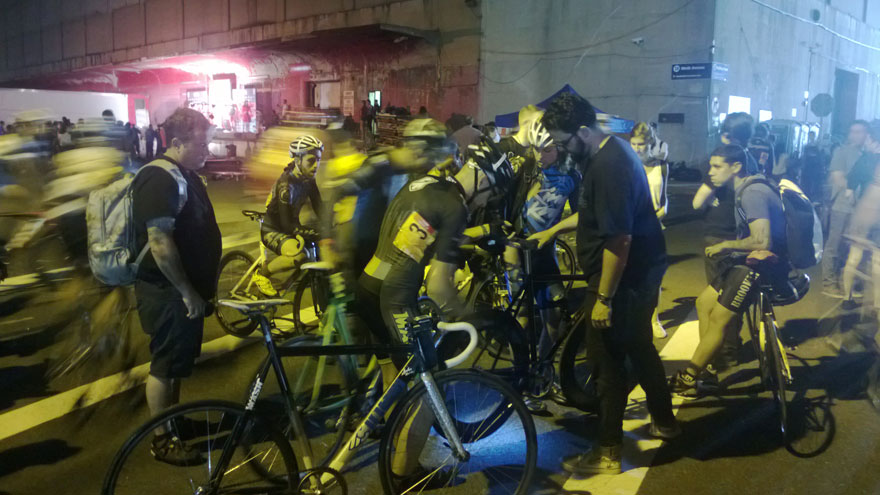 Making final preparations before heading to the line... 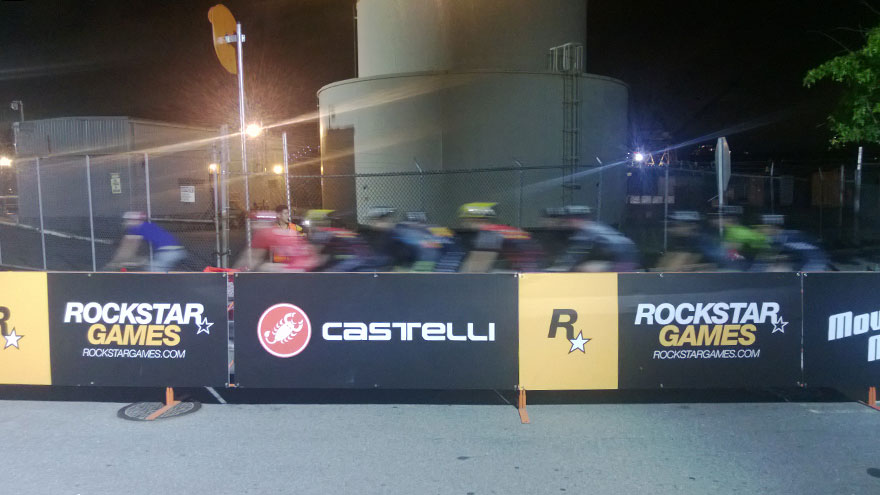 Thankfully, the spectacular wrecks during the Crit itself didn't result in any major injuries—mostly just bruised egos and a fragmented main field, which, at various points, was literally thinning out by the second. Minor pile-ups are a fact of racing, but the preponderance of early crashes certainly rattled the riders who managed to stay upright through the first few laps. Three-time winner Dan Chabanov had opted not to defend his title in March—Chabs was the lone leader for most of last year's RHC—only to crash out in the first lap of the race at the Navy Yard. Chas Christiansen won the first lap prime (a prize for the fastest time on that lap) but eventually skidded out on the dreaded S-curve, as did his MASH teammate Walton Brush, who had finished in third place in Red Hook; footage of all of these incidents can be seen in the following video:

Other favorites bowed out to mechanical problems—namely flats—as it was rough going on several stretches of the course. Incidentally, I ended up spending most of my time at the cobbled chicane, which offered a decent vantage point for shooting: not only was it relatively less crowded than the home stretch, but riders had to slow down for the speed bump and gravelly road surface or risk a flat. I heard the telltale hiss from the sidelines during a qualifier, as well as another during an early lap of the race—the dreaded silenced-pistol psst that is the bane of any cyclist, from lowly deliverymen to pro cyclists. 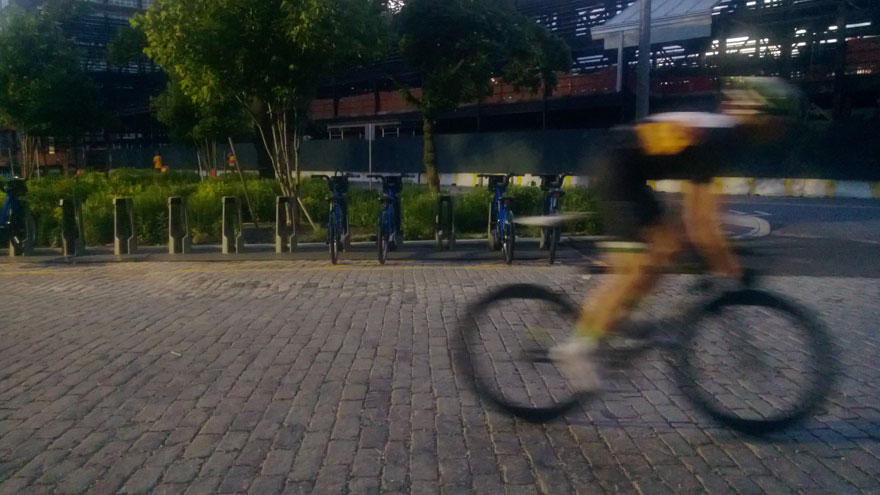 This corner, coming out of the chicane, was the site of an early flat-induced pile-up in the actual race...

As with previous editions of the RHC, simply finishing the race is an accomplishment for all but the most ambitious competitors: lapped riders are eliminated, and I'm sure the prospect of the rapidly-approaching pace car is as humbling as a wreck. 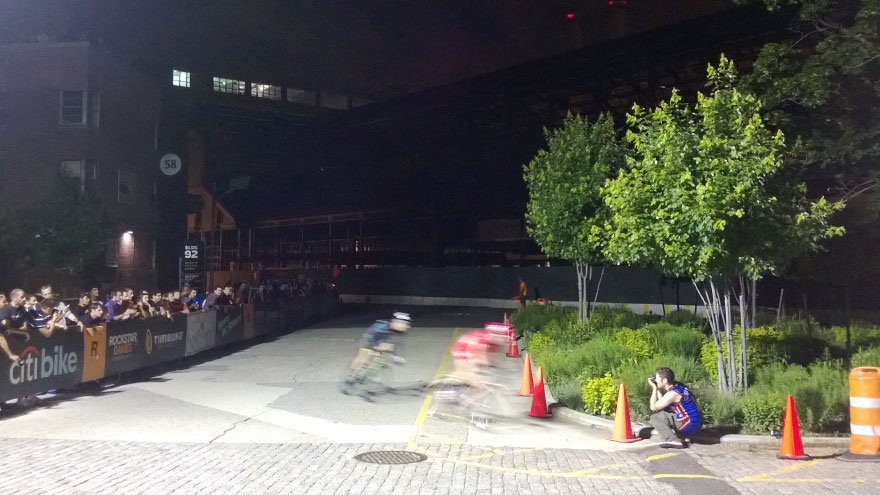 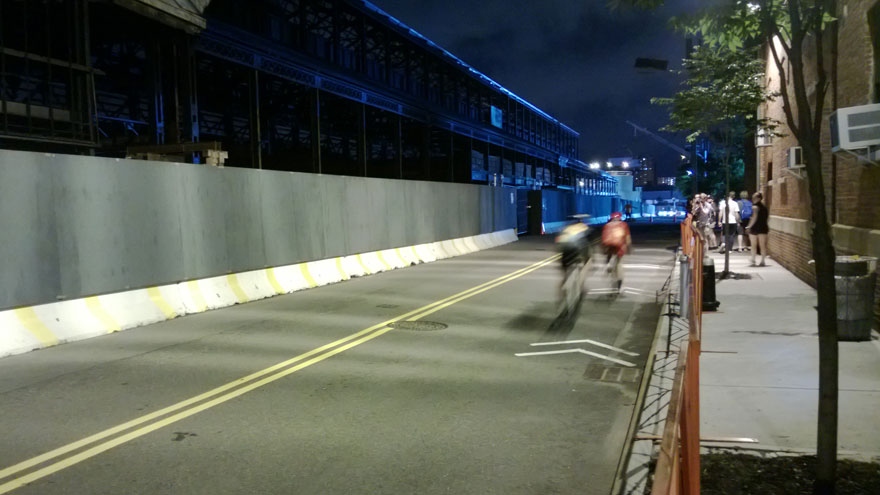 The vagaries of the course decimated much of the field, but it also made easy work of a dozen of the 17 riders who managed to log a 13th lap, halfway through the race: favorite Neil Bezdek and Kyle Murphy (also of the formidable MASH squad) leapt ahead to an insurmountable lead and eliminated much of the remaining competition with surgical precision. Cycling fans know that one of the advantages of taking an early lead is that you avoid messy crashes and their slow-going aftermath, which held true for the flagging peloton. (On a previous occasion, I'd heard Trimble make the offhand remark that starting position is absolutely paramount; rumor has it he told the pace car to ease up during the final few laps, when the two leaders threatened to finish off the so-called chase group of three riders.) 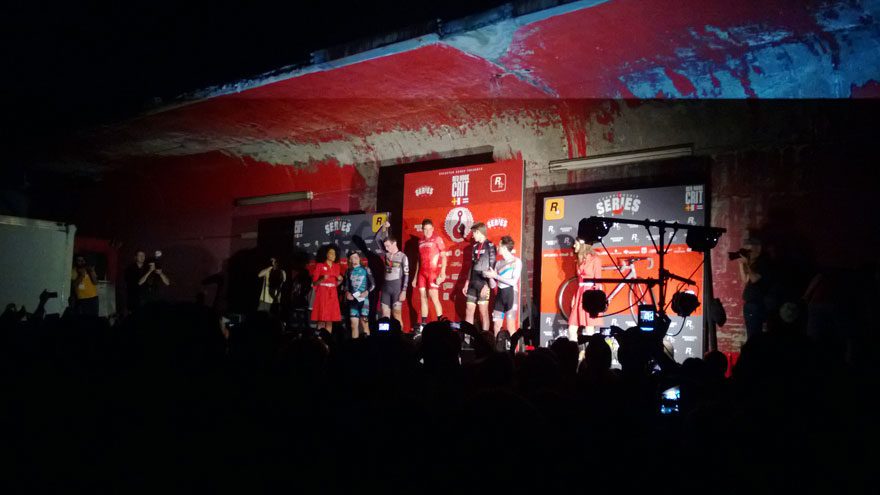 In the end, Bezdek chalked up another victory to emerge as the rider to beat for this year's Championship Series, defending his hard-earned podium position from the photo finish in Red Hook. Indeed, all five of the finishers were among the few who emerged from those harrowing early laps unscathed. Kyle Murphy didn't quite avenge his brother Evan, who had to settle for second in March, but he put up a strong performance nonetheless. Marc Marino rounded out the podium, while perennial contenders Alex Barouh and Cooper Ray were the only other finishers; fan favorites such as John "K-Tel" Kniesly and Austin Horse (who reportedly qualified despite getting a flat, ran the 5K, then raced the crit) did well simply to endure until they were caught with just a few laps to go.

All in all, Trimble has outdone himself with this first edition of the Red Hook Crit: Brooklyn Navy Yard, though he may have to work out some of kinks (literally and figuratively) for next year—assuming, of course, that the Navy Yard doesn't undergo a complete transformation by then. Whereas the race in Red Hook came down to the wire, with a respectable total of 28 finishers, the Brooklyn Navy Yard presented a far more daunting course, and we look forward to what Dave has in store for the second half of the Championship Series. Will Bezdek take seal the deal in Barcelona, or will other competitors step up to level the playing field? We'll have to wait until August to find out. 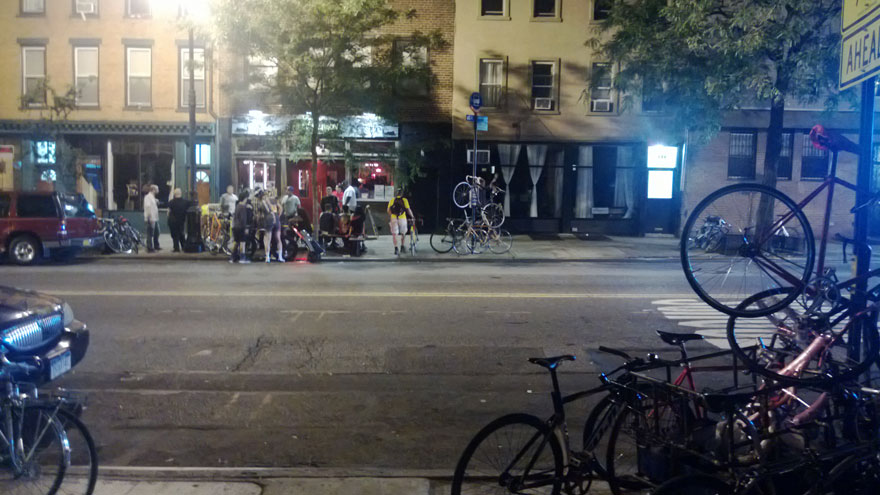 As for the phone itself, the Nokia Lumia 928 performed admirably in what were extremely non-traditional lighting conditions by any measure—stretches of near-darkness between the floodlit corners, long shadows, interrupted sightlines, etc... to say nothing of the fact that the subjects were flying by at 25mph. That said, I should disclose that I snapped some 400+ images in order to arrive at the 20 seen here, and while I've omitted several passable images, the selection ultimately may not represent what an average cameraphone user might capture with the Windows Phone.

Here, I'll defer to the pros: Emiliano Granado of Manual for Speed turned around a superb photo gallery in record time and Mike Martin of MASH posted several excellent photos of the picturesque Navy Yard alongside action shots... not to mention the Official RHC photo blog. (So too do the amateur videos that have been turning up also provide additional context and perspective: rider Chris Pino has posted the raw GoPro footage of his qualifier and the race itself; here's another crash vid.)