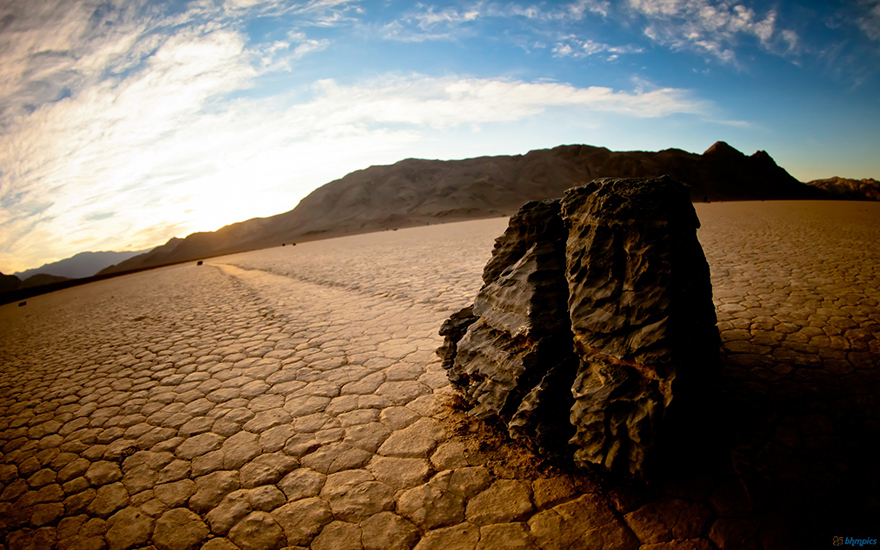 "Racetrack Playa" sounds like the screenname of an online teenager you're competing against in Need for Speed, but scientists recognize it as the name of a dried-up lake in Death Valley. For a century, scientific minds have been puzzled by a well-documented, poorly-understood phenomenon occuring at Racetrack Playa: Enormous stones, some up to 700 pounds, appear to have somehow moved themselves across the lakebed floor in random patterns, leaving a furrowed trail behind them. 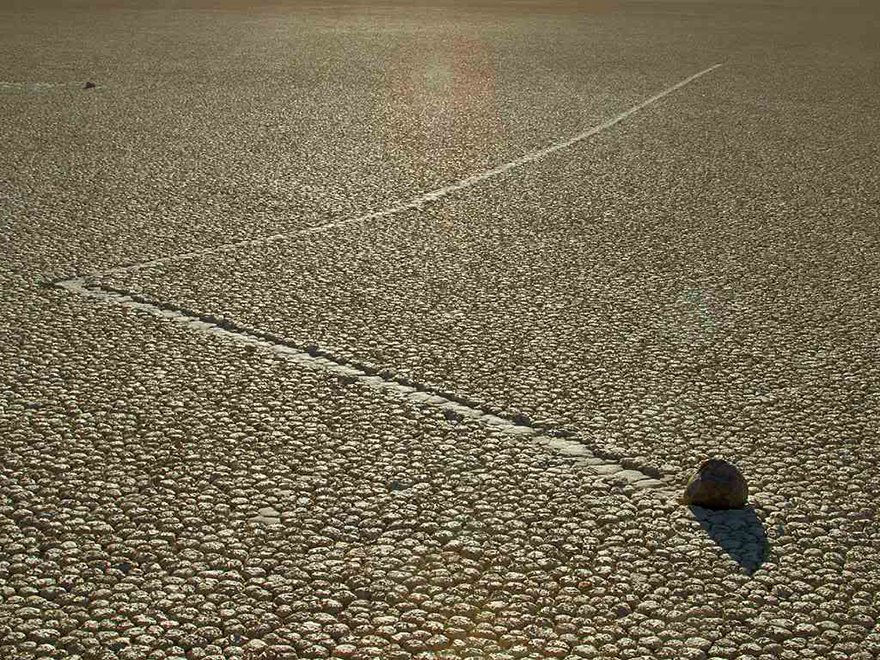 No one had ever seen these "sailing stones" move, but many photographed the end result. The original thought was that the lakebed forms a thin sheet of ice on it, and that the wind then blows the rocks across it; but that theory was discounted after researchers calculated it would take wind speeds of hundreds of miles per hour to move the rocks, while the wind at the Racetrack maxes out around 90 m.p.h. And if you're wondering why they don't just strap a GoPro camera onto a rock to see what's going on, scientists returning to the site over the years have calculated that the rocks move for short periods of time, just once every three years. That's a bit longer than your battery's likely to last.

However, a fortunate collision between two of these magic rocks provided planetary scientist Ralph Lorenz with an interesting discovery:Lorenz, studying the trails left by the stones, observed that one rock had collided against another and been deflected. "There was a rock trail and it looked like it hit another rock and bounced, but the trail didn't go all the way up to other the rock, like it was repelled somehow," Lorenz told Smithsonian Magazine. In other words, there was some kind of force-field-like barrier around each rock that prevented total contact.

What would spontaneously form a barrier around a rock, then later disappear? Lorenz realized that as moisture levels changed with the seasons, a collar of ice could form around the rock. With the rest of the lakebed covered in a thin, cold-but-not-frozen sheet of water, this ice collar would enable the rock it encased to float—slightly. It would lift it to the top of the water, but the rock's bottom, the part that was resting directly on the ground, would not have ice on it. Wind could then blow the rock across the water, and the bottom of the rock would dig a furrow into the lakebed. Later the ice and water would melt and recede. 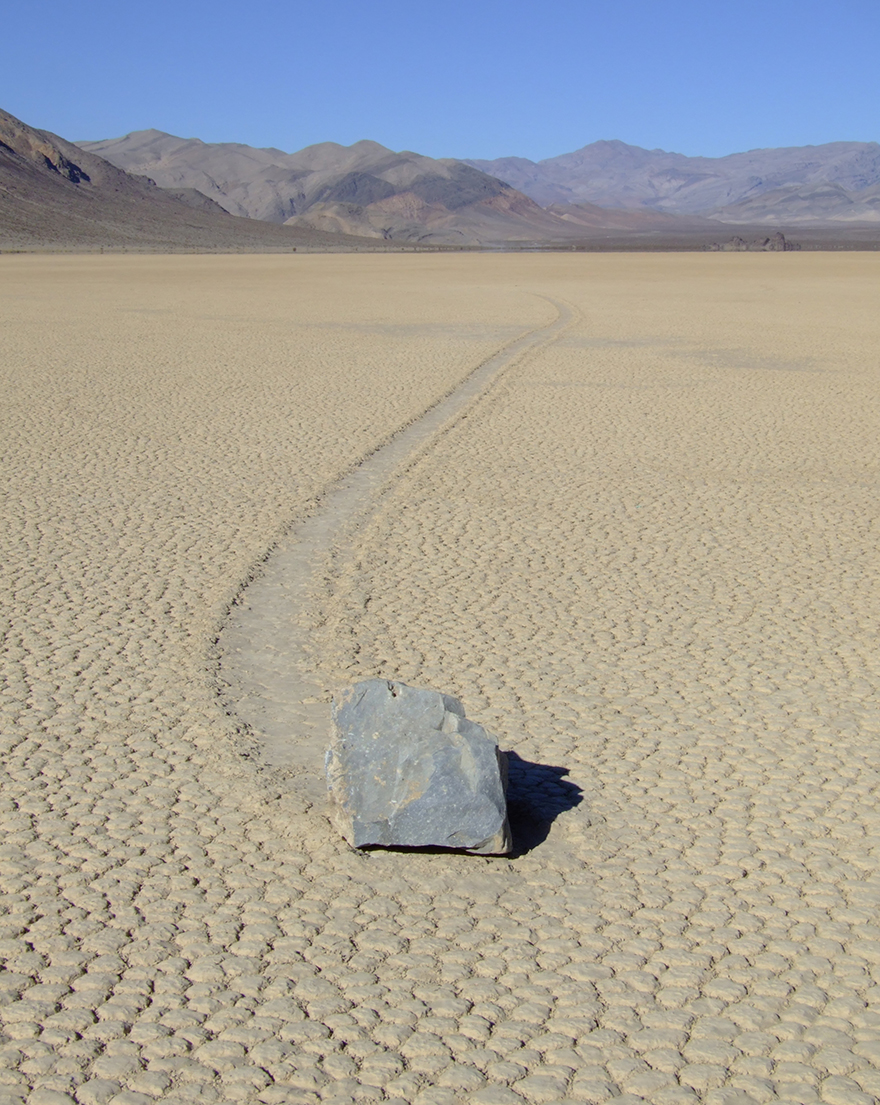 Eventually, Lorenz employed a tried-and-true method for testing his nascent idea: the kitchen-table experiment. "I took a small rock, and put it in a piece of Tupperware, and filled it with water so there was an inch of water with a bit of the rock sticking out," he says. "I put it in the freezer, and that then gave me a slab of ice with a rock sticking out of it." He flipped the rock-ice hybrid upside down and floated it in a tray of water with sand on the bottom. By merely blowing gently on the ice, he realized, he could send the embedded rock gliding across the tray, scraping a trail in the sand as it moved. After decades of theoretical calculations by countless scientists, the answer seemed to be sitting on his tabletop. 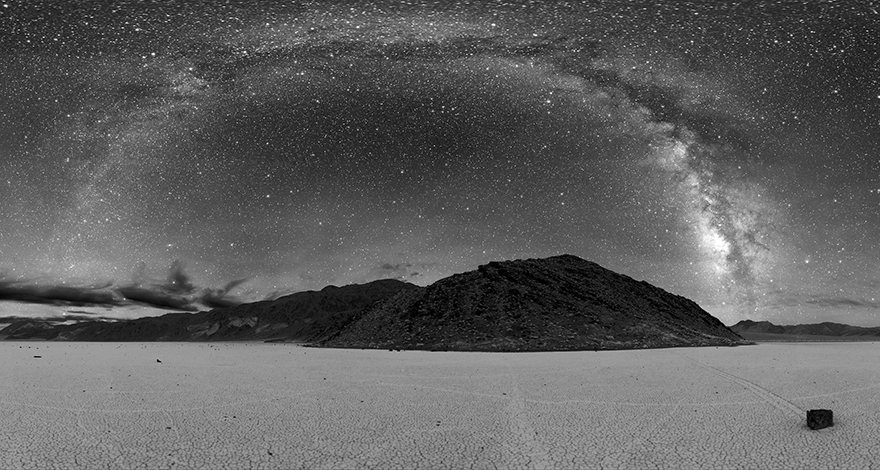