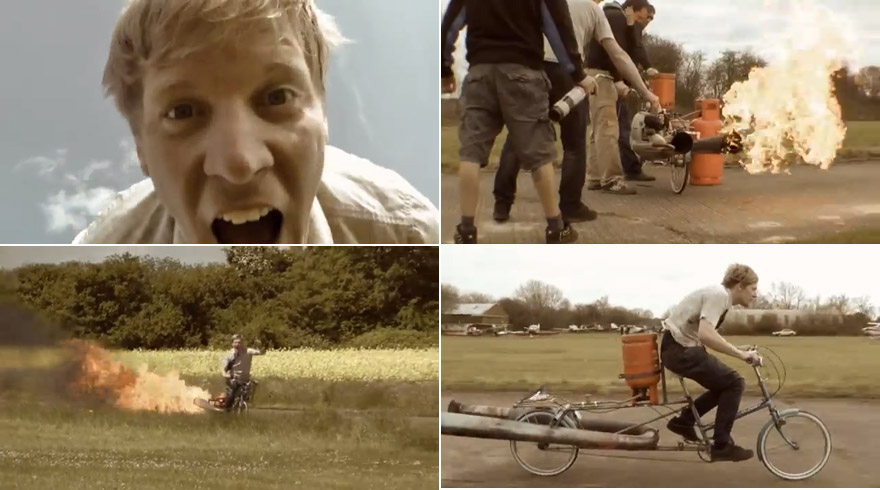 At this point in history, every last one of us is knee-deep in the YouTube era, the gold standard of user-generated content, where a new flash in the pan surfaces every day. Although Colin Furze is among the lucky ones who have managed to secure a bit of longevity, his latest stunt is the first time I'd heard of the Stamford, Lincolshire-based persona, a BMX rider turned plumber turned stuntman and video maker—and longtime DIYer / pyromaniac.

Furze combines Jackass's seminal let's-do-stupid-sh*t approach to reality TV and Casey Neistat's art of crafting subversive viral videos with an ill-advised disdain for safety equipment and an appropriately maniacal cackle, brazenly attempting to pull off projects so outrageous that they don't require a don't-try-this-at-home disclaimer. A nice primer on his antics circa 2011 includes his 72-foot-long motorcycle and insane bonfire, both of which were deemed worthy of world records, as well as his bread-&-butter of speed-related thrills. Always looking to outdo himself, he recently posted his first proper filed test of his latest and greatest invention, the JET bicycle—no, it's not an acronym, you just have to yell when you say it—a.k.a. "the most dangerous unsafe bicycle in the world." Although the superlative remains unsubstantiated, he's might just be right:

Yet there is a method to his madness: the raw material for his speed machine is his "mate's mum's" beloved bicycle—hence its nickname, Norah—remixed into a rather more extreme conveyance. And although Furze originally conceived a "jet with two wheels," he "also wanted to keep the pedals working to retain its 'bikeness.'" That, and the fact that the valved pulse jet apparently releases much of its energy as heat and noise.

Furze further notes that "at speeds up to 35mph it's ok, rather pleasant," at which point he starts to lose control; at 45mph, he's holding on for dear life, and even though he's "just waiting for the tires to blow" when he tops out at 50mph, he also implies that the road surface was less than ideal and is confident. (I should note that I've had to fix his grammar even in these short quotes; the description text reads like a stream-of-consciousness composed on a smartphone with eclectic autocorrect. But I digress.)

Indeed, Wikipedia notes that valveless pulse jet—denoted early in Furze's video—is the "simplest known propulsion device," one that has been used for everything from model airplanes to cruise missiles; some of you may even be among the 6m+ viewers of this surprisingly mundane video of a pulse jet go kart. Furze, for his part, did well to thoroughly document his process in a series of weekly updates over the course of last month, starting with a so-called "how-to" video (above) in which he successfully rolls a sheet of stainless steel into a long cone... by hand.

Furze further demonstrates his kludgy fabrication prowess in the fourth and final making-of episode—following a pair of pulse jet test videos—when he actually attaches the contraption to the humble Raleigh. Circular saw disassembly and slapdash welds notwithstanding, it looks like he actually knows what he's doing, despite his juvenile shenanigans (he seems to make a point of pelvic thrusting in each clip; his boyish demeanor belies his 32 years) and admittedly winsome ADHD disposition. Furze has Obree's obsession with speed sans the pathology; his entirely unsystematic approach also marks a stark contrast with his fellow countryman Tom Donhou, who has just released a teaser video for his attempt to break the 100mph mark on a hand-built fixed-gear bicycle of his own design:

Those of you who are less ambitious can refer to Make magazine's tutorial for a tabletop pulse jet. And seeing as most of us prefer the vicarious thrill of online video—an armchair adrenaline rush, if you will—here's a bonus video, featuring "Well of Death" riders in India (Furze constructed and rode in one of his own back in 2007):