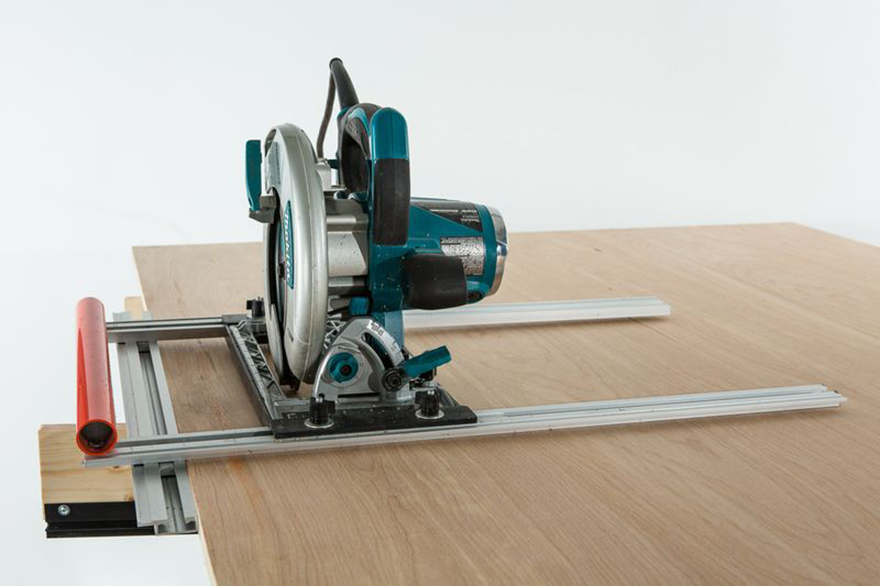 Inventor Dino Makropoulos, who has spent years working on his Eurekazone Track Saw system, has recently developed a pair of new product designs that potentially obviate the need for the track. His new UEG, or Universal Edge Guide, is an attachment for a circular saw that enables the quick, safe breakdown of sheet goods, via a rail that rides along the factory edge of the sheet. And not only that: As Makropoulos is obsessed with user safety, he's introduced a design element in the saw base that makes kickback just about impossible. 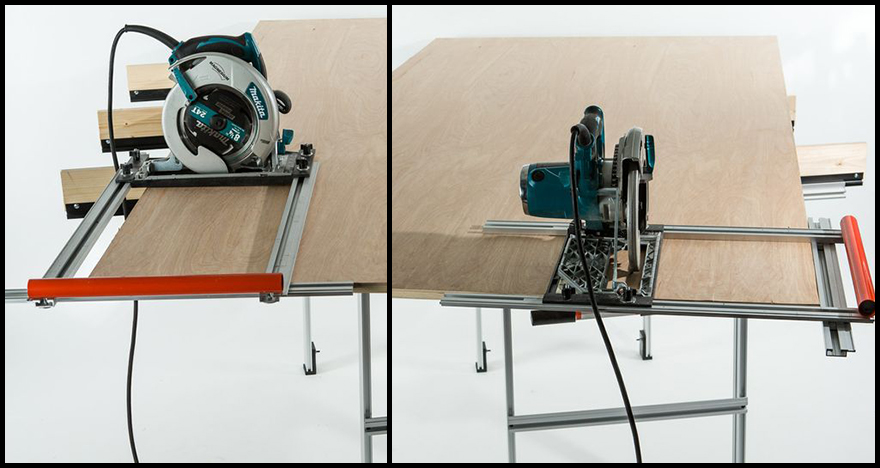 Don't believe us? Watch this insane video (and please kids, do NOT try this at home) where Dino purposely tries to create kickback with a circular saw, both with and without his UEG attachment:

Now in the first two attempts in the video, where the saw is not fitted with the anti-kickback base, the only reason the saw doesn't fly out of Dino's hands is because he's a pro carpenter and has been for years. NONE OF YOU SHOULD EVER ATTEMPT THAT—he's done it for demonstration purposes only. In the hands of a novice or even a pro that's just not paying close attention, a kickback can cause grievous injury.

As the latter half of the video demonstrates, by fitting the base of the UEG with a stiff plastic fin well aft of the blade, he has made it virtually impossible for kickback to happen.

Here's another example of something you'd never try with an ordinary circular saw:

For those that don't understand why cutting a plywood sheet sideways without a UEG would be insane, I'll explain: As you make the cut across the sheet, the sawblade leaves a kerf—a slot the same width as the blade thickness—behind it. As your cut progresses, the weight of the top part of the plywood will sag towards the lower half—closing the kerf and causing a potentially vicious, saw-hurling kickback. With the fin that Dino's installed, it is impossible for the kerf to close around the blade. Which means no kickback. (For those of you saying "riving knife," read the Q&A below.)

The other thing you'll spot if you watch that video closely: During the last cut, as Dino gets towards the end, the wood accidentally shifts sideways. Ordinarly that would be a recipe for disaster, but the steadying effect of the edge guide working in conjunction with the fin precludes any potential kickback.

We caught up with Dino for a quick Q&A on the new design:Core77: What prompted you to invent the UEG?

Dino Makropoulos: Like always, safety, ease, and affordability are the driving factors with all of our tools. Even if we sell the most complete line of tracks, we know that not all people have the money to invest in complete tracksaw systems. Why not offer the UEG?

There's also the old, and true, saying that necessity is the mother of invention. We use the UEG at our shop and it's a lifesaver.

What's the UEG made out of, and why did you choose those materials?

High-strength ABS plastic and extruded aluminum. Today's modern materials and methods are very reliable and very easy to work with while offering a lifetime of dependability.

This is something consumers order, and attach to their circular saw themselves. How do they do that? I imagine the alignment requires some precision.

All the consumer needs to attach it is one Allen key, which is included. Everything is pre-drilled and you can start cutting in minutes. We've designed blade aligning tabs that make it very easy to align the blade to the edge guide, which is very important.

What is the UEG's cutting capacity?

It makes unlimited-length ripping cuts, as you're not limited to the length of the tracks anymore. Out of the box, you can do cross cuts up to 28". People who want to extend that length can buy extensions, but we feel 28" capacity for ripping is more than enough.

You've been working on your track system for years. Why move away from it, is there something inherently wrong with the design of track systems?

No, and in fact tracksaw systems are slowly becoming a trend to cut panels. In the last decade Eurekazone has helped make tracksaws a logical choice. The UEG is simply a better, more convenient tool that still compliments all the existing tools and ways very nicely.

Ultimately our philosophy is to leave it up to the consumer to decide which is best for them to use. And we've observed that many people are using the UEG to cut narrow strips, too; it's not limited to large panel cutting. If you design a good tool, users will figure out smart ways to use it.

1. Pressure-applied antichip protection on both sides of the blade for smooth cuts with no splintering.

2. Dual guidance for your cuts. The UEG rides along the factory edge of the plywood, while the fin, riding inside the kerf, acts like a secondary guide at the same time. It also provides anti-kickback protection.

3. The UEG's name says it all, "Universal." It is designed to fit any circular saw. But to make installation easy regardless of which saw you own, we've incorporated built-in algining tabs to align the blade to the device.

4. There are dual arms with a solid, continuous pusher bar. The bar is designed to put your hand at the correct place to apply pressure.

How is your fin different from a riving knife?

A riving knife is thin, flimsy metal that can flex. They can get damaged over time and once it bends, it's a useless accessory. In the EU, many manufacturers are giving up on riving knifes on circular saws.

Our fin is solid, sturdy plastic. You saw the video where I am trying to create a kickback? You see that it doesn't break? And when you are using the saw with the UEG riding along the edge, the forces on the fin are almost nothing. The fin follows the blade because the edge guide controls the movement. The fin is both an antikickback device and a secondary guide for great accuracy. We want to make woodworking both safer and more accurate, and this system does that.

We were pretty surprised at the price: The UEG rings in at $99, and at press time there was a $79 promotional price. For new entrants, that's a lot cheaper than buying a series of tracks; for those that have already invested in tracks, the anti-kickback saw base can work together with them (you just purchase the base without the side-riding guide).