Non Sequitur: More Than You Probably Ever Cared to Know about the U.S.-Canada Border 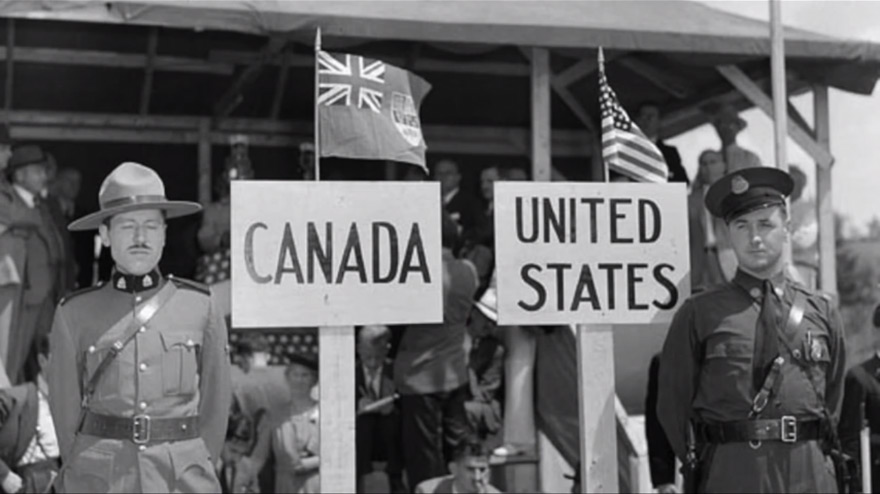 Having spent the better part of my childhood in the suburbs of Minneapolis, I suppose I simply took the shape of the state for granted—it never occurred to me that the tiny protrusion on the northern edge of the state was an aberration. Maybe I subconsciously presumed the U.S. had somehow annexed the Northwest Angle in a largely forgotten border dispute with Canada... which, it turns out, isn't that far off from the truth. Indeed, it's the only part of the continental 48 that is above the 49th parallel, as I learned in this short video about the longest land border between two countries (and at risk of stretching for a design connection, it seems that geopolitical borders are the ultimate constraint):

The London-based cartophile C.G.P. Grey covers most of the geographical details in the video, but here is the 'official' definition, via the International Boundary Commission:If you look along the International Boundary between Canada and the United States in any forested area, it will appear simply as a 6 metre or 20 foot cleared swath stretching from horizon to horizon, dotted in a regular pattern with white markers. Over mountains, down cliffs, along waterways and through prairie grasses, the line snakes 8,891 kilometres or 5,525 miles across North America, tranquil, undefended but not uncared for. The boundary vista must be entirely free of obstruction and plainly marked for the proper enforcement of customs, immigration, fishing and other laws of the two nations. The job of keeping the boundary vista in proper condition falls to the International Boundary Commission. 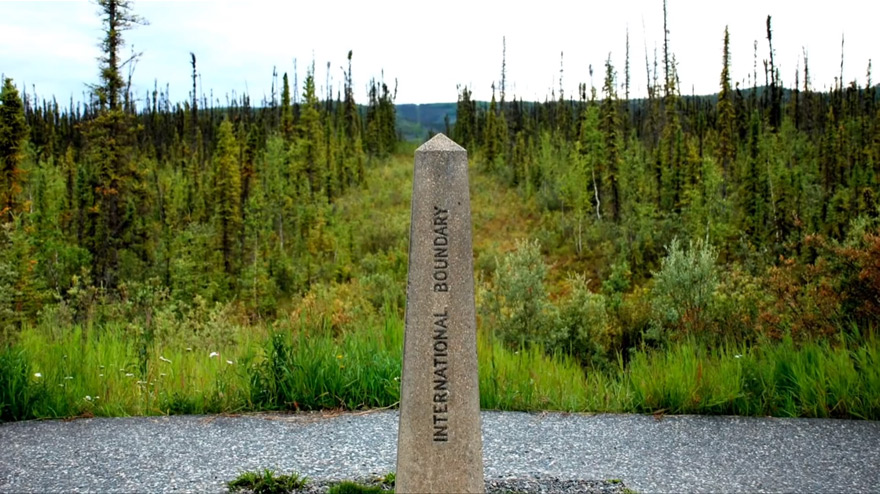 (You may also notice that this is the second episode on "Bizarre Borders"; the first one, on single-border nations, is also interesting—I, for one, learned that the Gambia is properly preceded by a definite article—albeit shorter and less in-depth, partly serving as an intro to the U.S.-Canada vid.) 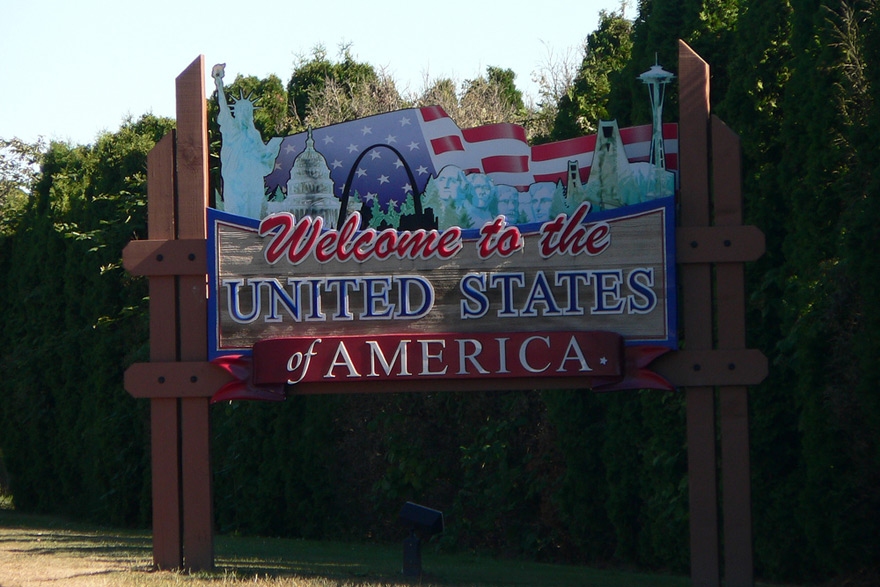 Curious to learn more, I turned to Wikipedia, where I discovered that Detroit is the only city where one travels south to cross over to our neighbor to the north. In fact, the Ambassador Bridge, which spans the Detroit River to connect Motor City and Windsor, Ontario, "is the single busiest international land border crossing in North America, accommodating 27 percent of the approximately $400 billion in annual trade between Canada and the U.S." A CBC News article has a list of 2011 facts and figures about the "special relationship" between the U.S. and Canada—i.e. not only did Canadian visitors to the U.S. spend 35% more per overnight trip than their Stateside counterparts ($705 vs. $522 in 2009), but they also stayed for twice as long on average (eight days vs. four).

The Peace Bridge, which links Buffalo, New York, to Fort Erie, Ontario, is the next busiest crossing. Completed in 1927, it was the only vehicular crossing in the Great Lakes region for the first couple years of its existence, prior to the completion of the Ambassador Bridge in 1929. 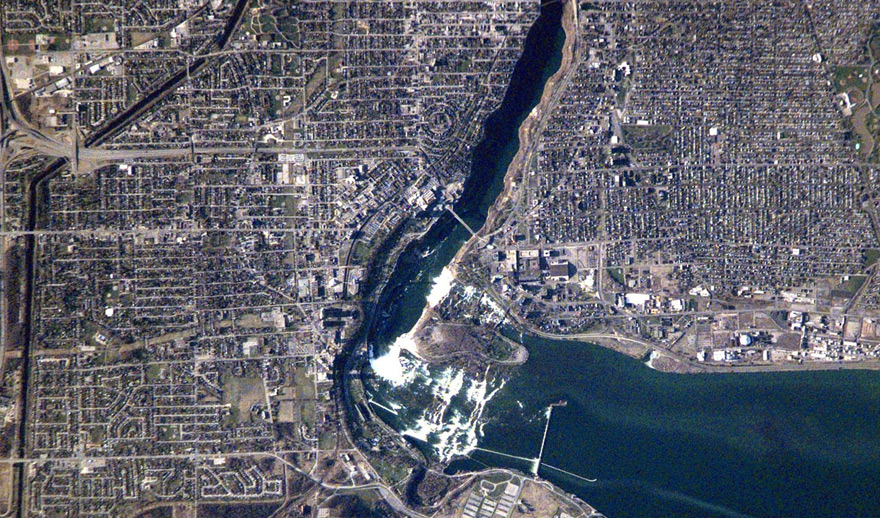 Canada is to the west (left) of the river; Horseshoe Falls is the largest white spot on the western edge of the bend. Image via Wikimedia Commons

Nearby Niagara Falls is, of course, the most popular tourist attraction on the border. Upwards of 20% of the freshwater supply in the world—the combined volume of the four upper Great Lakes—passes through the iconic waterway. The border runs through Horseshoe Falls, the southernmost of the three waterfalls, which carries 90% of the volume of the Niagara River northward towards Lake Ontario.

The Great Lakes region is the major commercial hub of the U.S.-Canada border; the busiest border crossing west of Detroit is over 2,000 miles away, between Blaine, Washington, and Surrey, British Columbia, where U.S. Interstate 5 becomes Highway 99 (the former roadway is the only major interstate highway that crosses both the Northern and Southern borders of the U.S.—i.e. you could take I-5 all the way from Mexico to Canada). The crossing is the site of the Peace Arch, which occupies an eponymous park between the northbound and southbound lanes, sitting atop the exact international border. 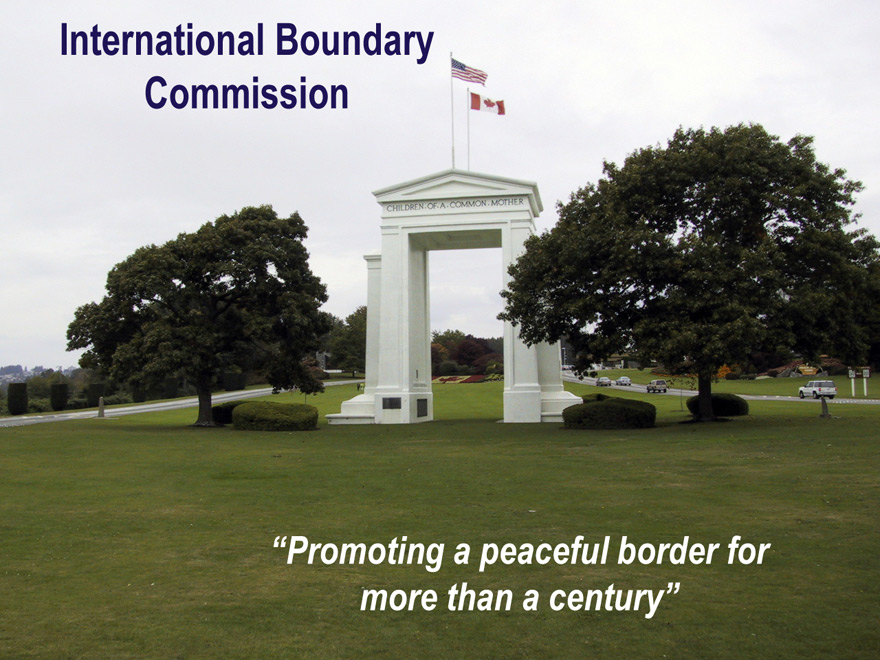 The outskirts of Blaine also happens to be the site of a 2007 imbroglio in which President Bush ultimately fired International Boundary Commissioner Dennis Schornack. (The aforementioned IBC comprises two members who are jointly responsible for maintaining and regulating the boundary as independently appointed chiefs of staff, equipment and budget.) Long story short, a Washington family built a cement wall that encroached on the vista—the name of the 20-ft swath—and Schornack got involved, resulting in the first ever lawsuit against the IBC (just short of its centennial, no less). He was relieved of his duties despite his claim that the organization is independent of the U.S. government, such that "a vacancy can only be created by 'the death, resignation or other disability' of a commissioner."

Modern litigation aside, it turns out that the border region played a minor role in World War II. According to Wikipedia,One curiosity on the Canada-U.S. border is the presence of six airports that straddle the borderline. The airports were built prior to the US entry into World War II as a way to surreptitiously transfer US-built aircraft such as the Lockheed Hudson to Canada under the provisions of the Lend Lease Act. In the interest of maintaining neutrality, US military pilots were forbidden to deliver combat aircraft to Canada. The aircraft were flown to the border, landed, and then at night towed on their wheels over the border by tractors or horse.

Via Maps on the Web

Non Sequitur: More Than You Probably Ever Cared to Know about the U.S.-Canada Border