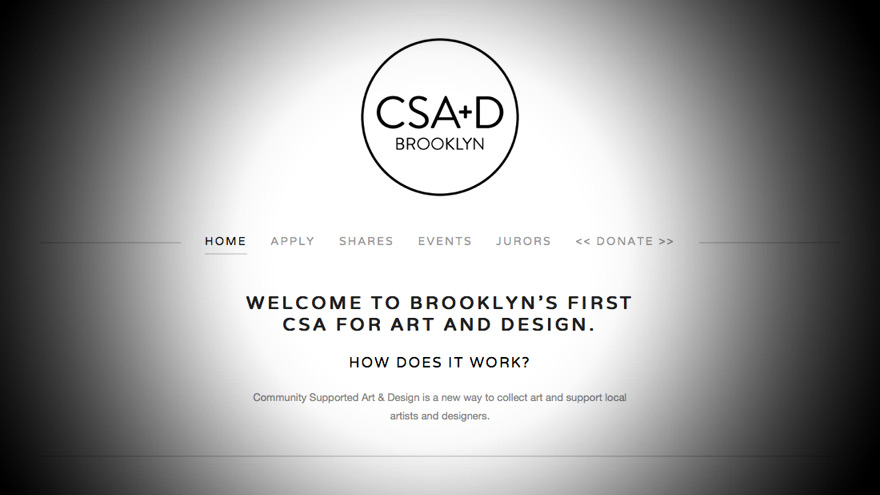 The fact that New York City is probably about as urban a setting as one can imagine is probably precisely why the urban garderning movement has slowly but surely established roots in the five boroughs: the notion of growing fresh fruits and vegetables seems intrinsically subversive in a way, a sort of eff-you to the largely inhospitable concrete jungle that is the apotheosis of agrarian environs. So too does Community Supported Agriculture (CSA for short) offer the vicarious satisfaction of living off the land, a cooperative business model in which consumers buy produce directly from growers to the mutual benefit of both parties.

The direct-to-community approach has extended to include various other farm-raised products—I had considering joining a local meat CSA before a friend was promoted to head butcher at a local grocer—and is generally regarded as a viable model for local food distribution. Now a couple of Brooklynites are looking to bring community support to art and design in what they've dubbed CSA+D.Trying to make it as an artist in New York (or anywhere) is no easy task. And yet while the resources to do so are hard to come by, there are so many talented people here in New York creating beautiful art and design works. Likewise, there are also many people here who would love to collect original work, and are willing to pay for something more than an generic print to hang on their wall, but can't afford the high-end art gallery prices and don't know where to find the work of those who have yet to hit the big time.

CSA+D Brooklyn aims to bridge this divide, connecting up-and-coming artists with up-and-coming art collectors, providing local support to emerging artists and designers while creating a new, easier way for people to collect locally-produced work. You can learn more about how the service works by watching the video above.

2. COLLECT
Through a juried process, artists and designers will be chosen to create 50 pieces for the CSA+D. Each full share will consist of works across several disciplines, potentially including painting, printing, sculpture, textile, decorative objects, ceramics, music, lighting, t-shirt, collage and books.

3. SUPPORT
The Brooklyn CSA+D makes contemporary art and design accessible by connecting Brooklyn-based artists and designers to the community, and in return that community provides significant support for their work. Shares will available for purchase soon at two price points for the inaugural season beginning Fall 2013.Although it's a neat analogy, I don't know if the economic model translates to art and design objects, which (typically) are neither perishable nor seasonal... which is not to say that there isn't value to the labor and production of editions, but rather that they lack the immediacy—i.e. the food-waste-guilt—of produce. With a CSA, you find a way to make it work—maybe you're eating gourds for two months straight; maybe your family and friends are getting sick of eating apple pies, tarts, muffins, cakes, juice, sauce, butter, etc. for the fifth week in a row, but in a way, that's what you're signing up for: a constraint. But in the case of Community-Supported Art & Design, these objects will accumulate, as things do, and while I personally don't see myself duly cherishing each and every object that turns up on my doorstep, perhaps it's a challenge for aspiring aesthetes: to grow to appreciate a Xeroxed artist's book as much as a handmade textile or ceramic...

That said, curated subscription services do exist, and insofar as the element of surprise is part and parcel to a CSA, I imagine that the serendipitous nature of the Brooklyn CSA+D might be precisely the appeal for many would-be collectors. In fact, limited editions may well be more suited to the pre-paid model than a grab bag of products—as in, say, the Fancy Box—such that the overarching story adds a de facto layer of meaning to the art and design objects. 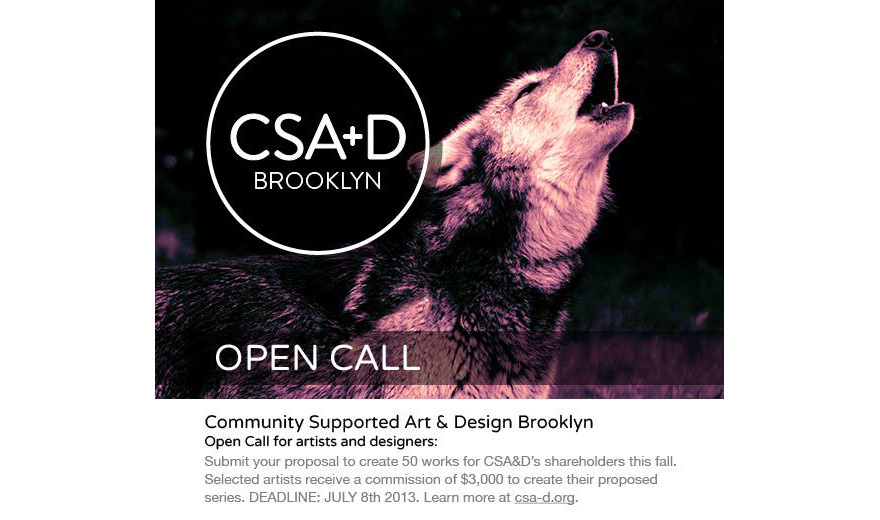 Of course, CS is just half of the equation, and I suppose it's more interesting from the perspective of the A+D. Artists and designers have just under a week to apply for chance to earn a $3,000 commission for an edition of 50 works by mid-September, to be distributed to the founding shareholders of the Brooklyn CSA+D. Not only is it an unconventional way for armchair champions of creative culture to support local makers-of-things with an anonymous financial commitment, the CSA+D is also a low-risk, potentially-high-reward distribution model for those producers. The real question is whether a complete set of the works—six in the inaugural season—will make for a coherent collection in itself, and if the concept is scalable beyond the 50 shares at launch.

In any case, the Brooklyn CSA+D is very appropriately seeking crowdfunding to launch this fall—show your support on IndieGogo, or check out CSA-D.org or their Facebook page to learn more.