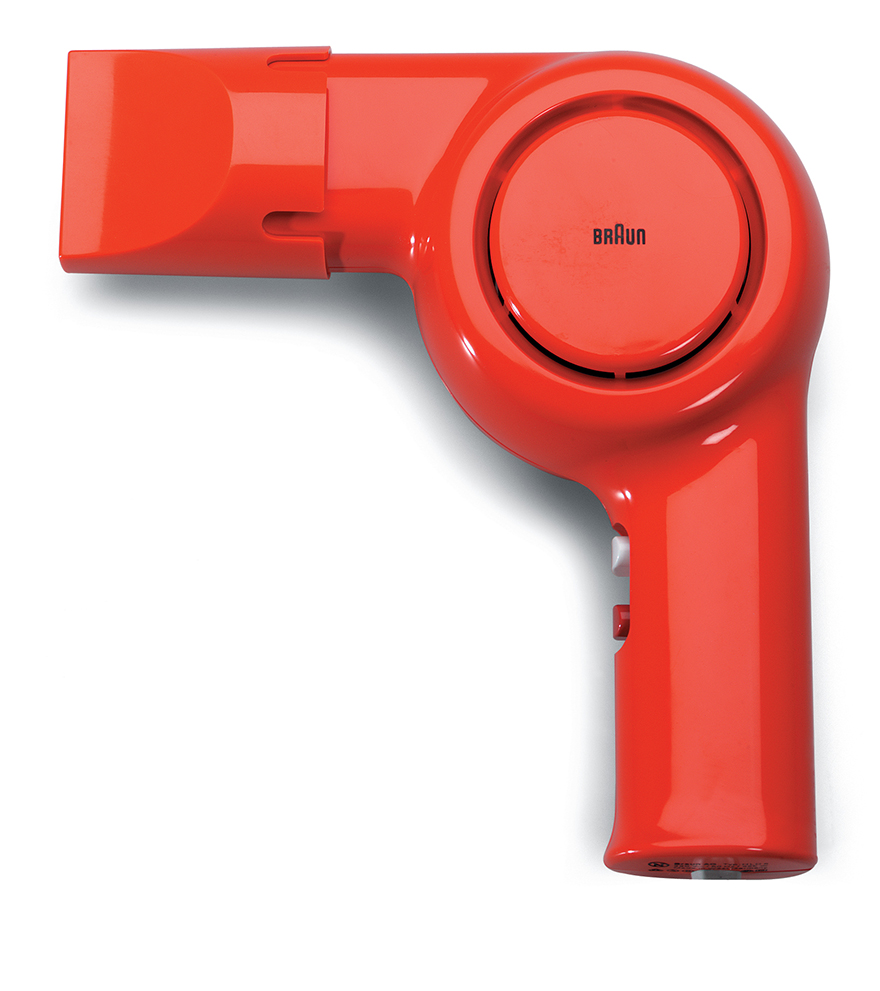 Handheld hair dryers made by a variety of manufacturers had existed since the early part of the 20th Century, but they weren't very popular; They were heavy, unwieldy, and even dangerous, offering a risk of electrocution. They were also ugly: Most of them looked like a large metal teardrop with a stick-like handle shoved into the side of it.

By the early 1960s, Braun was confident enough in their technology that they knew they could produce a safe, reliable handheld hairdryer—and one that was beautiful. What is fascinating about this timeline of Braun's haircare products is that you can see their thinking evolve. As per usual, they undertook bold experimentation in form factor, ignoring what their competitors were doing, until finally arriving at a "correct" solution on their own terms. They also started out thinking the hairdryer was a unisex product, then later realized that each gender was using them differently, and bifurcated their offerings to address this. 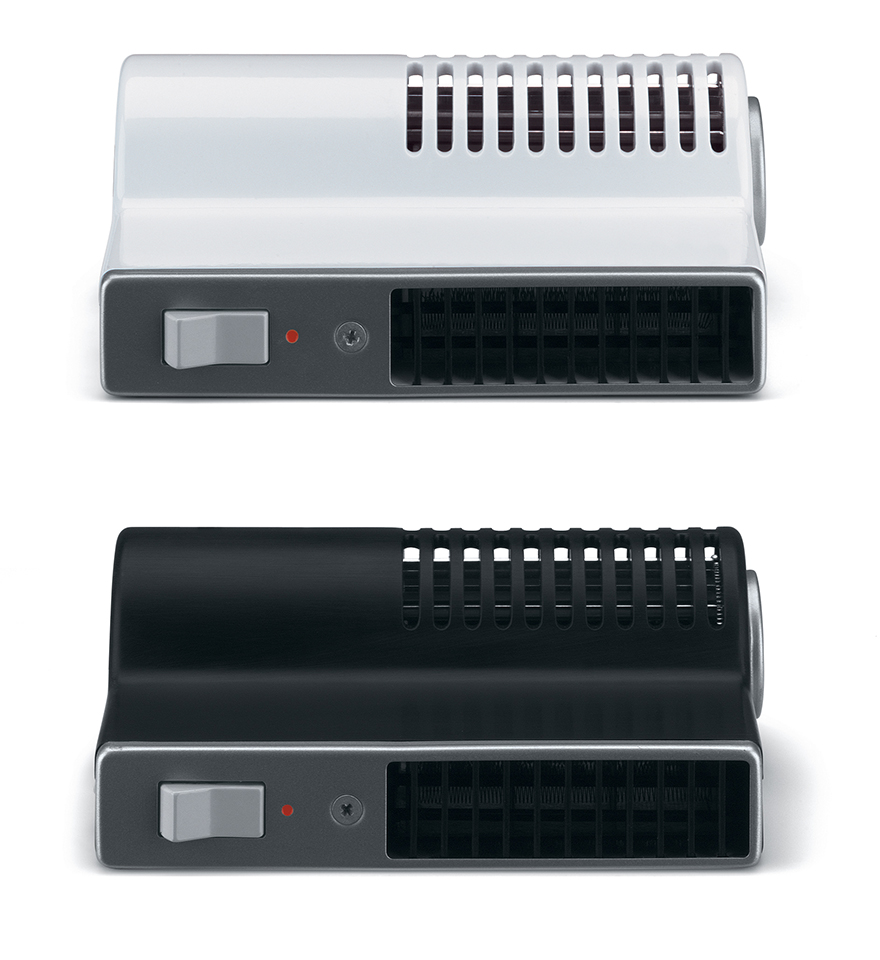 Braun's first hairdryer, the HLD 231, eschewed the teardrop-on-a-stick form factor that was the current norm. Instead the sleek unit resembled a small heater, one meant to be grasped by the cylindrical bulge at the back. A single switch at the front, with a minimalist red dot, leaves no doubt as to how you were meant to turn it on. The device sold well enough that it did not require updating for some six years. 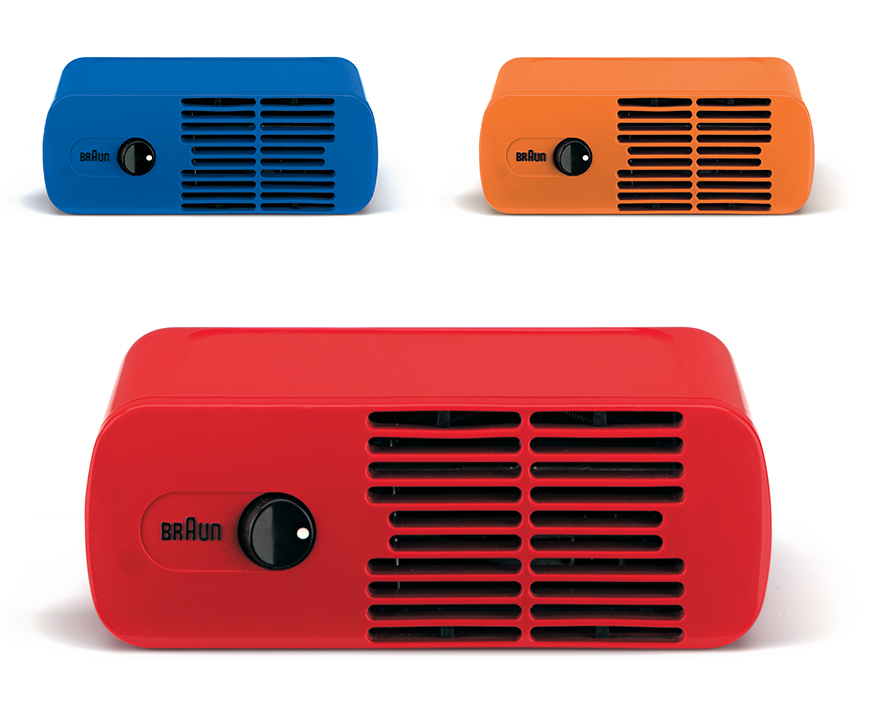 Rams' 1970 update, the HLD 4, featured a friendlier shape and a grill area nearly as tall as it was wide. Aesthetically, the split, horizontal lines of the grill resemble earlier versions of Braun stereos, attempting to convey a brand identity across product categories. 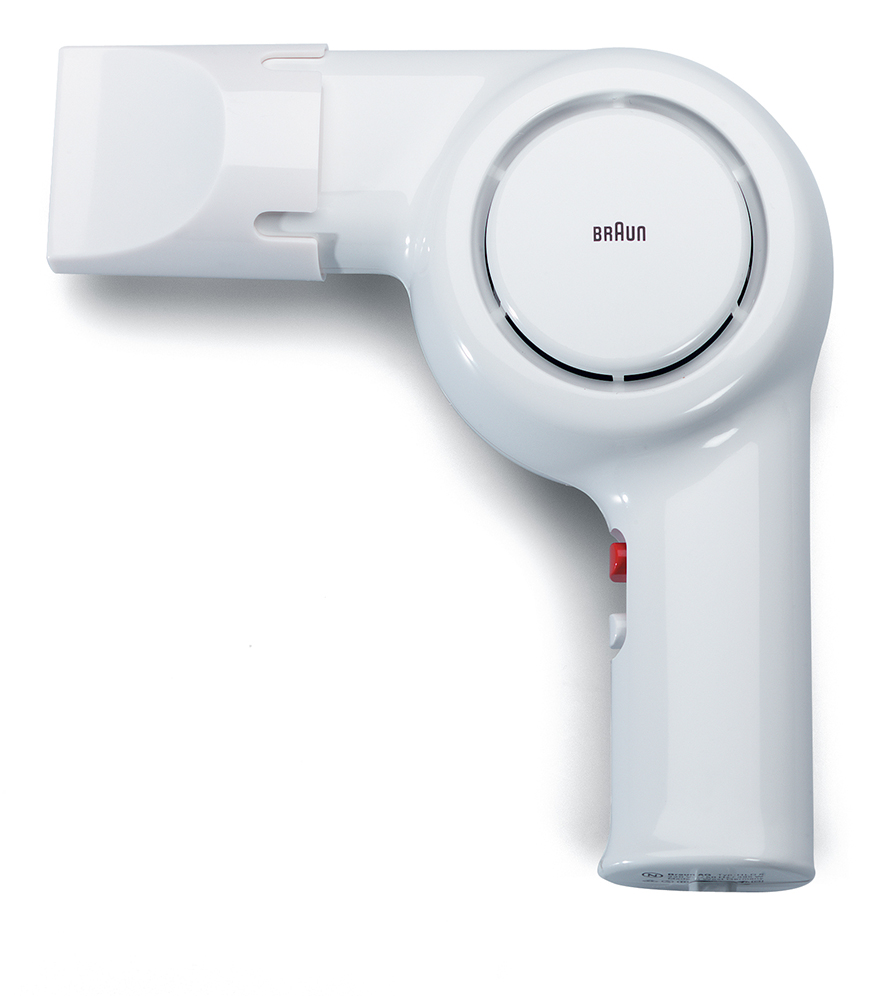 What is refreshing about Braun's designs is the willingness to completely move away from what has come before in the quest for formal perfection. Greubel's HLD 6/61 jettisons the brick form factor in favor of a pistol shape, one with a kind of symmetry along the 45-degree axis. 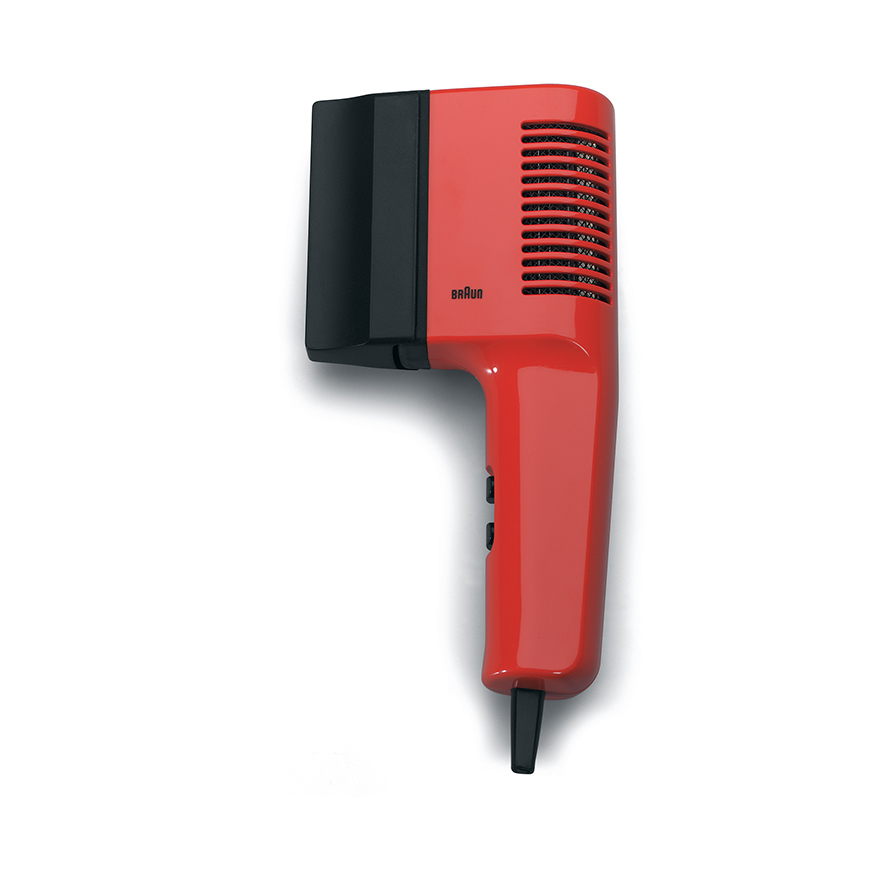 The HLD 5 again modifies the form factor, experimentally shortening the nozzle in an effort to make it more minimal. The circular slit that served as the air intake on the HLD 6/61 is done away with, instead incorporating the lines-in-a-row set-up we saw on Rams' HLD 4 and many a Braun radio. 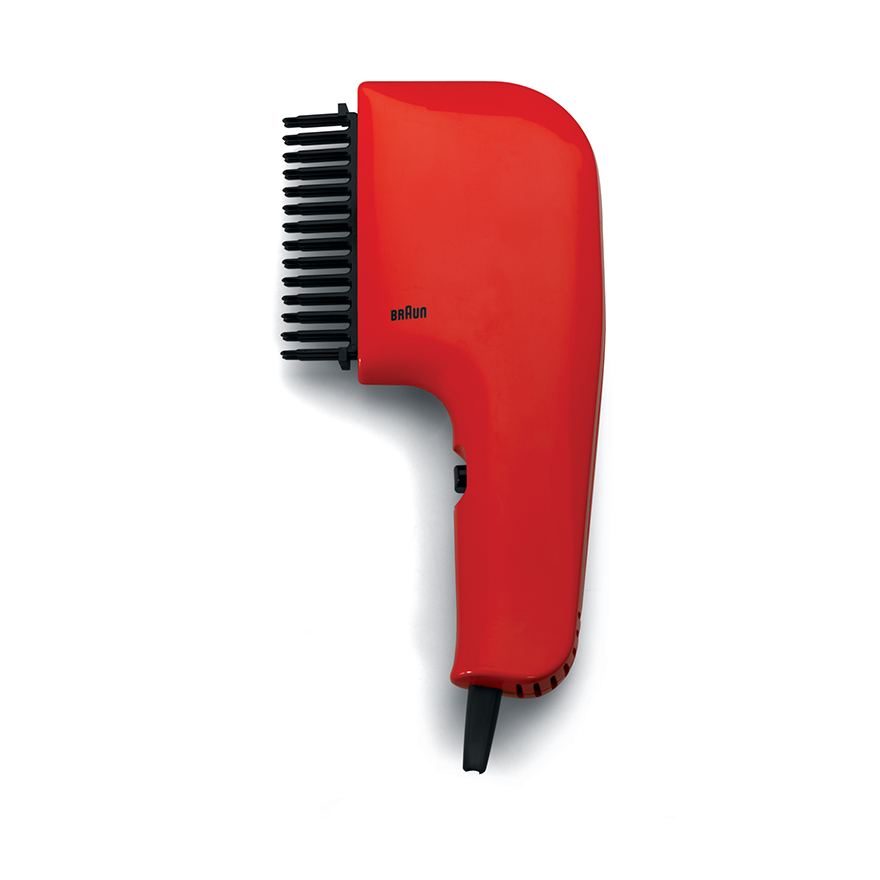 By 1974 Braun observes that women are using hairdryers in concert with a hairbrush, in order to style their hair as they dry it. The EPK 1, Braun's first hairdryer designed specifically for women, endeavors to kill two birds with one stone by means of a comb-like array on the nozzle. 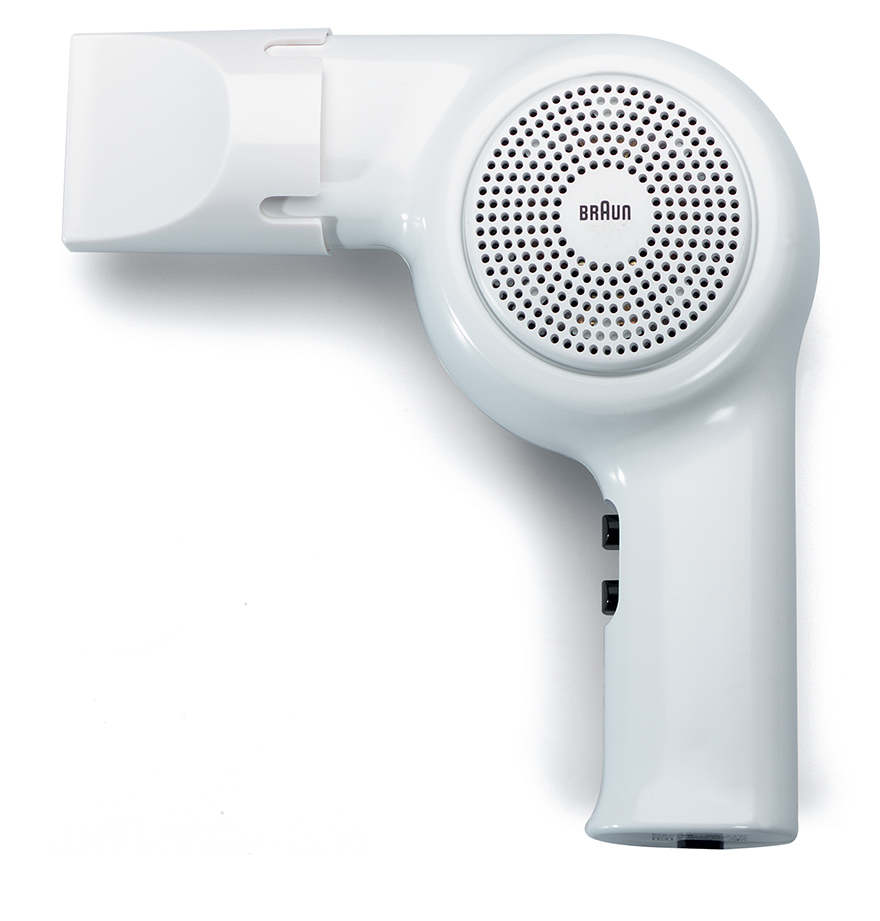 At first glance the HLD 1000 seems rather like the HLD 6/61, but here we see they've incorporated that Braun grid-of-dots for the air intake, again recalling an earlier, and recognizable, design element from their radios of yore. 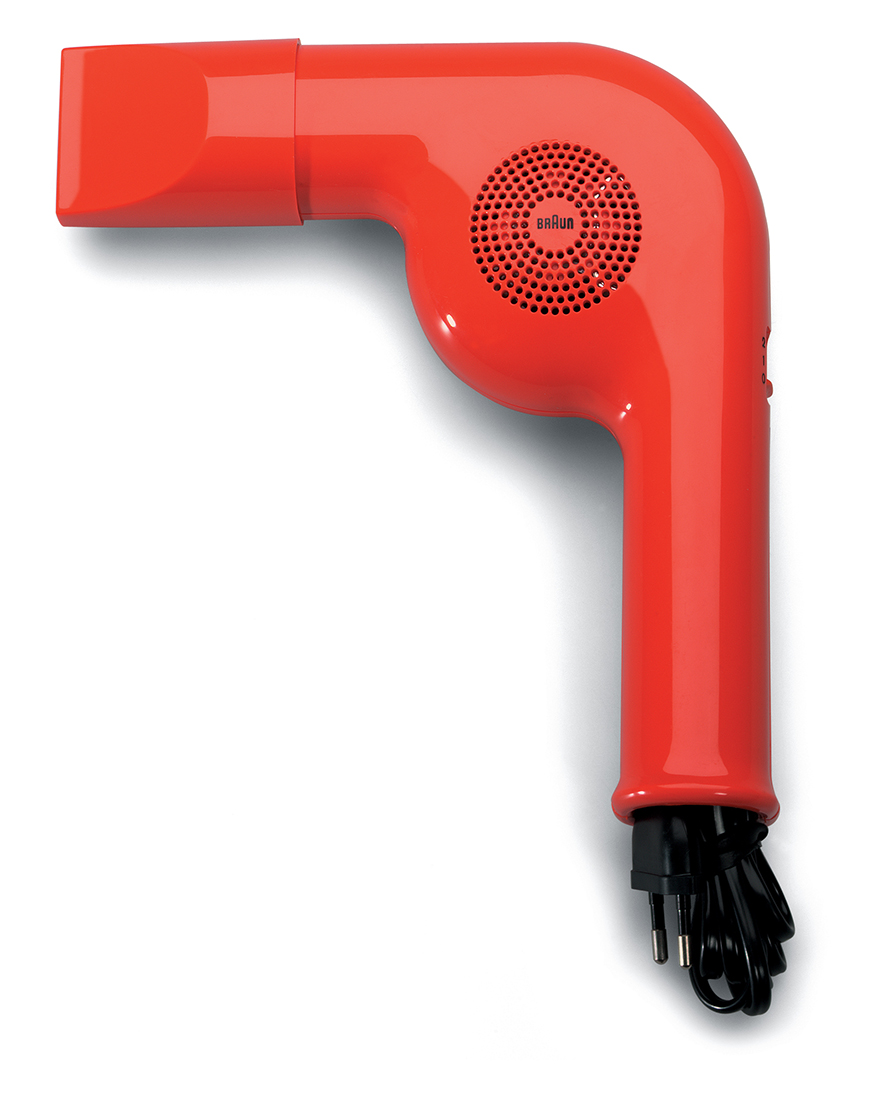 The HLD 550 is a further refinement of the HLD 1000, smoothening the surface and reducing the size of the dot-grid air intake as their technology then allowed. It also contains a hollow handle, providing a convenient place to store the power cord. 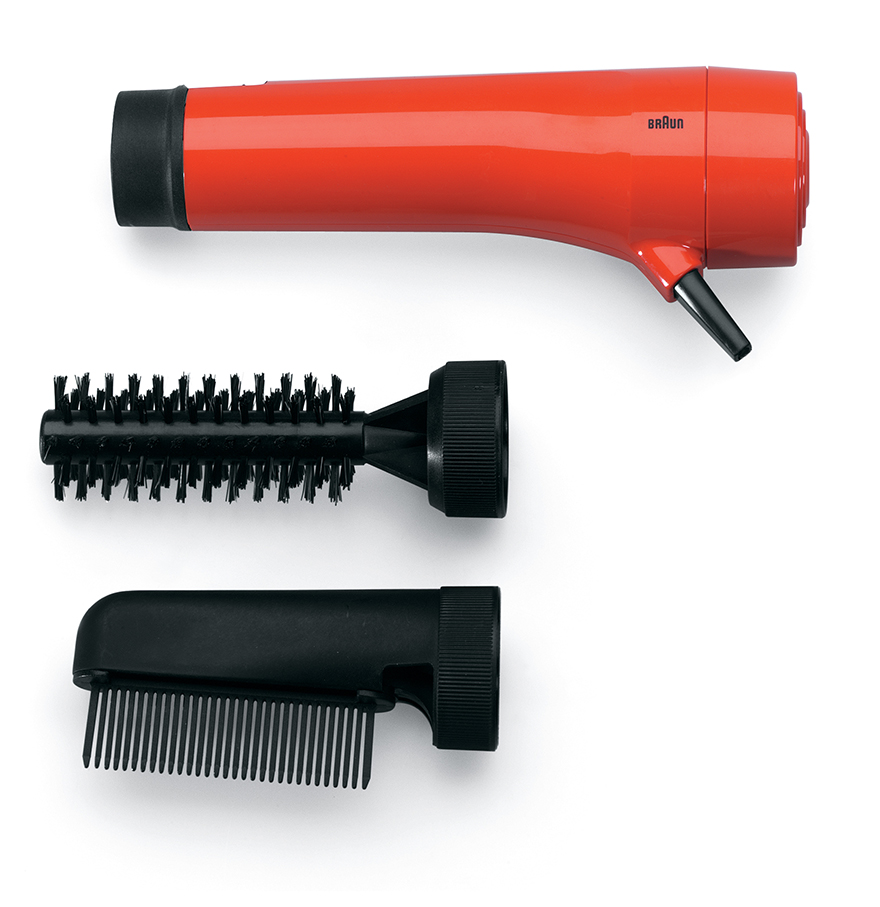 In 1977 Braun updates their hairdryer for women. The RS 60/65 ought more properly be called a hairstyler, as the improved form factor allowed women to put the desired curls and waves of the era into their hair as they dried it. It also contains a technological advance: Previously all hairdryers required air intake from the side. Here Braun's engineers have worked it out so that air intake occurs in the rear of the device, allowing the air to travel in a straight line. 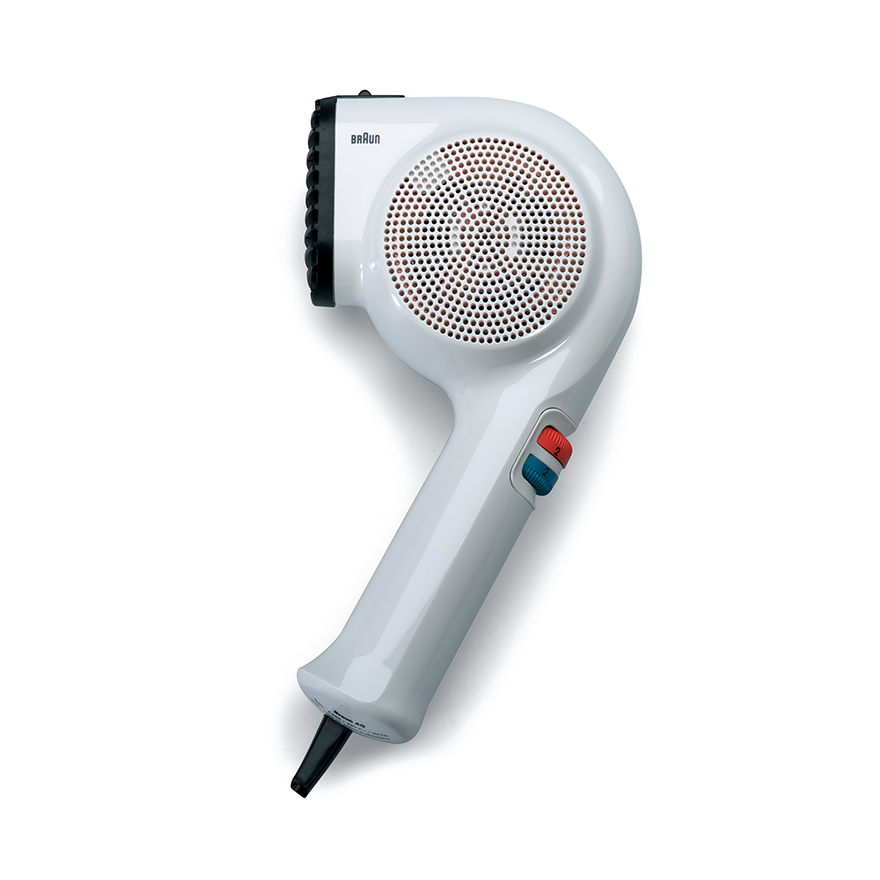 The radically compact PGE 1200 not only features a drastically shortened nozzle, but a handle that slanted in the opposite direction of what competitors were producing at the time. This was no contrarianism; Braun had concluded that slanting the handle in this direction was an ergonomic improvement. 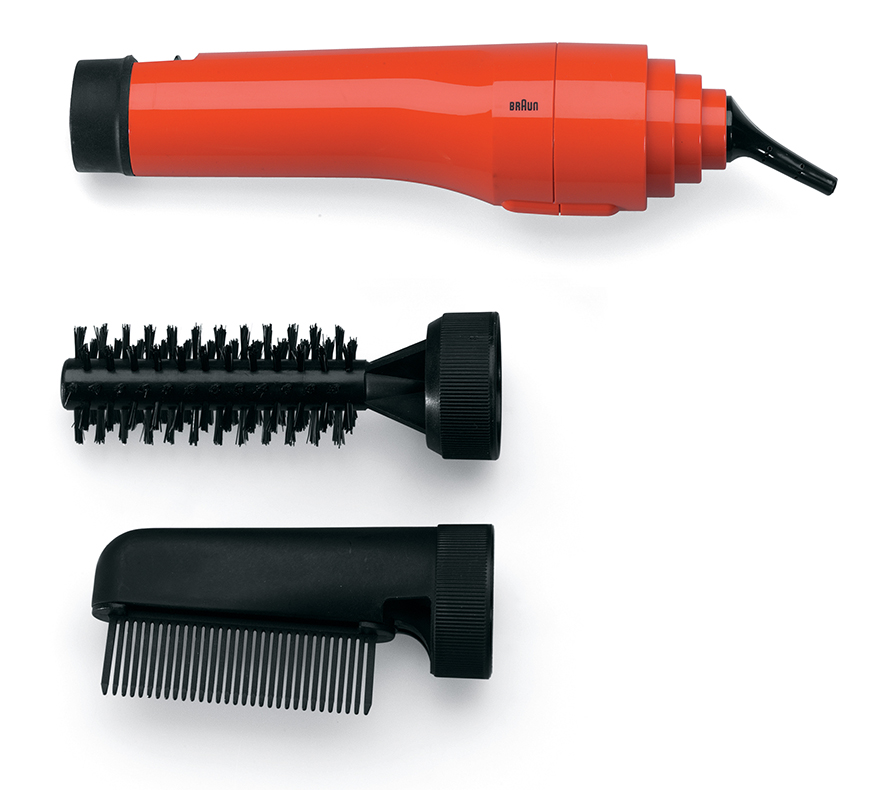 At first blush this seems like the RS 60/65, but look closely at the two and you'll see the RS 68 is more elegant. Because the air intake on the RS 60/65 was at the end of the device, there was no way to place the power cord there; here Haase has worked out that by creating circular steps at the end of the device, he can have a centralized power cord ringed by the air intake. 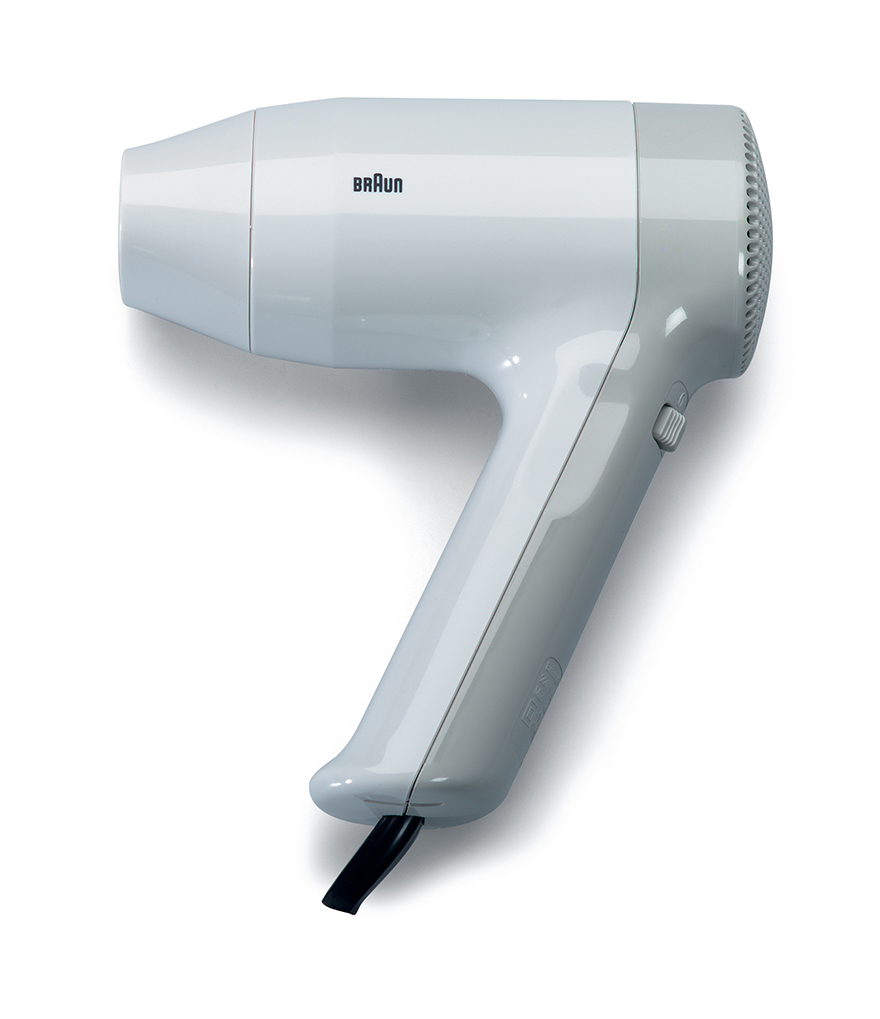 This is perhaps the most beautiful hairdryer Braun ever created. The PGC 1000 Featured the ergonomic, swept-back handle; the technological rationalism of the air intake and blowing function at opposite ends; and it's all wrapped in a sleek, compact package with not a line out of place.

Oberheim's GC 2 was a more compact, battery-operated version of the women's hairstyler, allowing them to take it on the go. 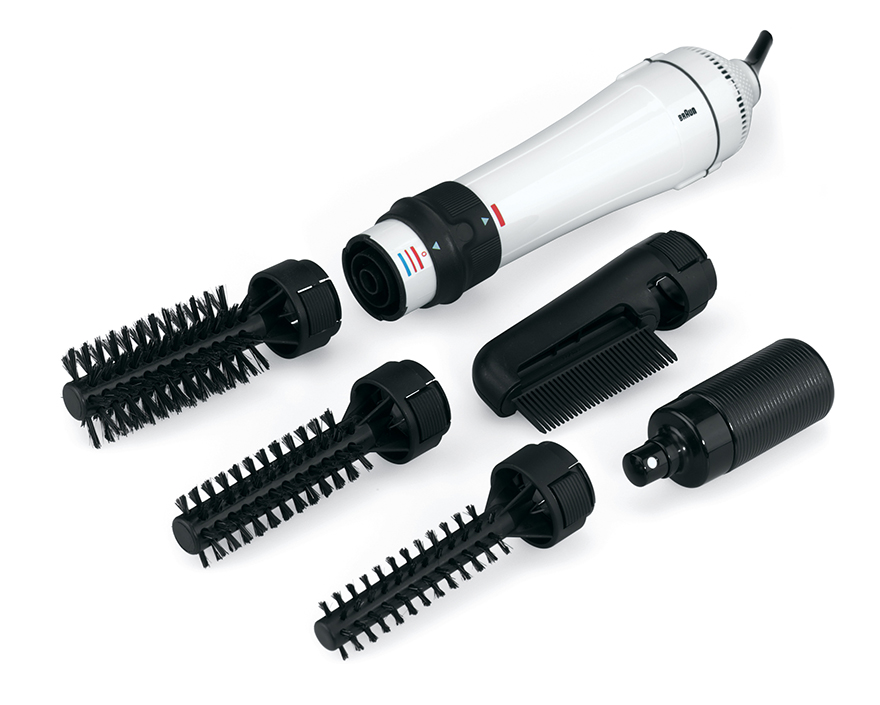 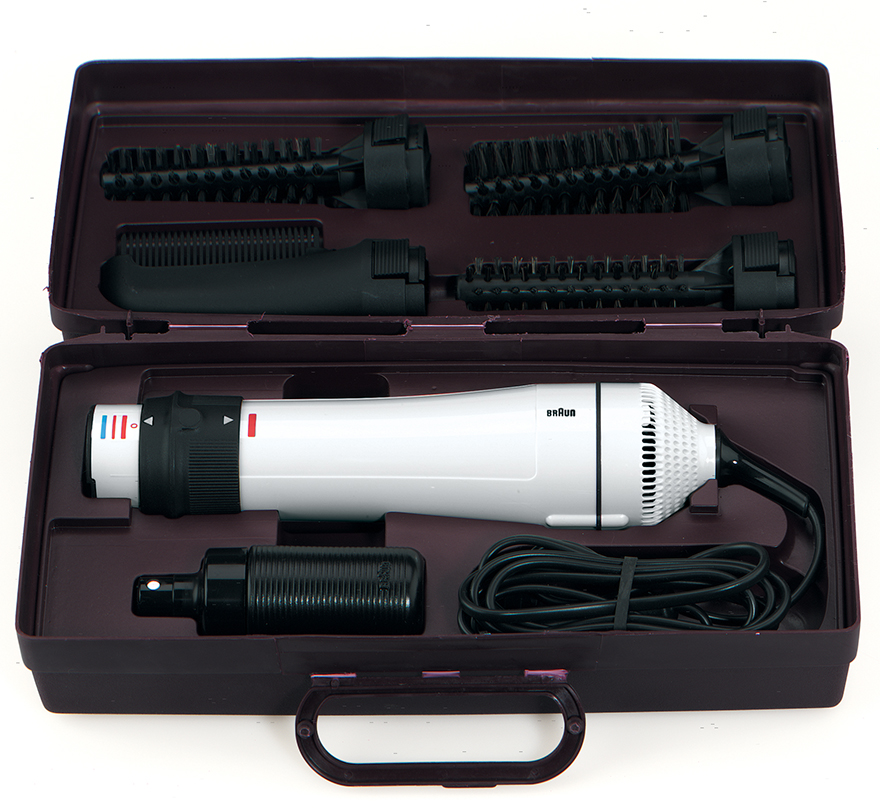 The RSK 1005 was the women's hairstyler meant to provide it all, with a series of swappable attachments. It came in a handy carrying case to keep the parts organized. 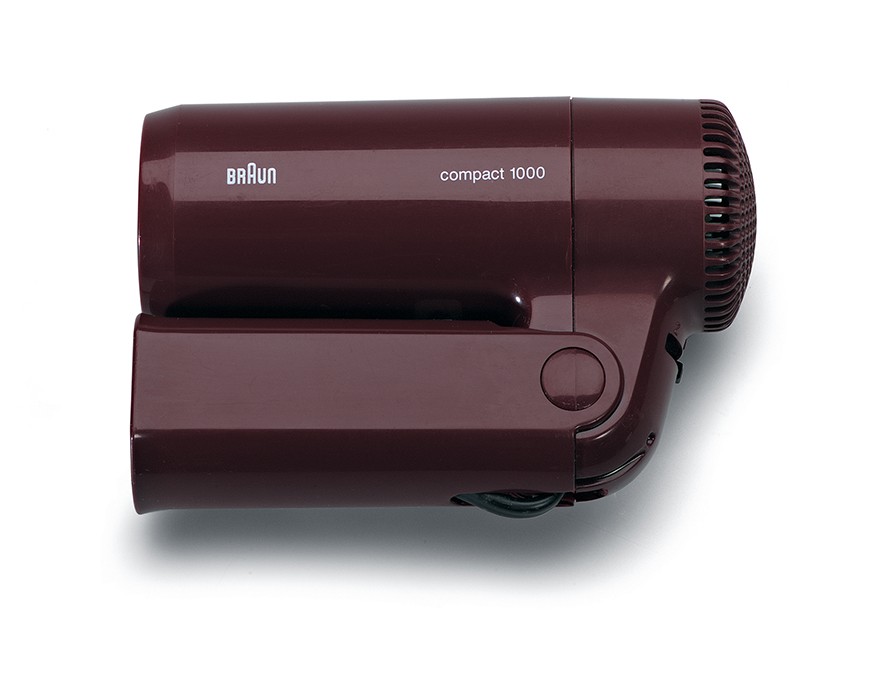 With the BP 1000 Braun produced a portable, folding hairdryer that could be tucked neatly into a travel bag. The cord disappeared into the hollow handle. And the handle opened into the swept-back angle of the PGC 1000. 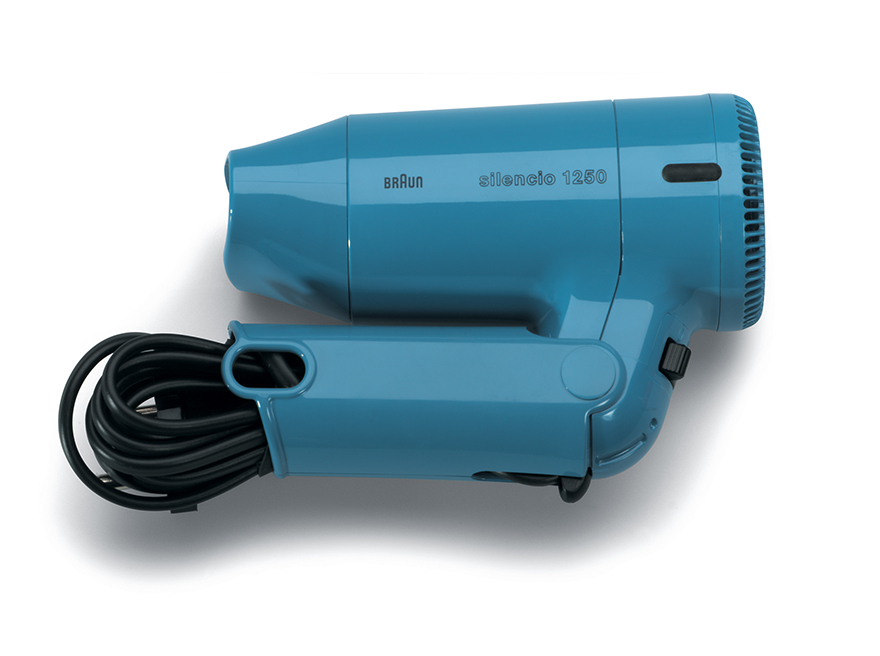 The portable PC 1250, an update to the BP 1000, contains subtle changes: The air intake has become flatter and the nozzle was tapered to produce a more concentrated airflow. The handle still holds the cord, but a loop has been added, allowing the PC 1250 to be hung from a hook.

A woman using the RS 60/65 in the 1970s could not have imagined the Sensocare, Braun's current-day offering in the women's hairstyling product space. The technology has advanced by leagues; now a smooth-gliding ceramic plate provides the heat, while built-in sensors detect the hair's moisture levels to constantly micro-adjust the temperature of the plates. Compared to the relatively busy RSK 1005 of 20 years earlier, the sleeker, more minimalist Sensocare is designed to do more with less.