Sex Sells: Drawing the Line in the Florera Decorative Sand 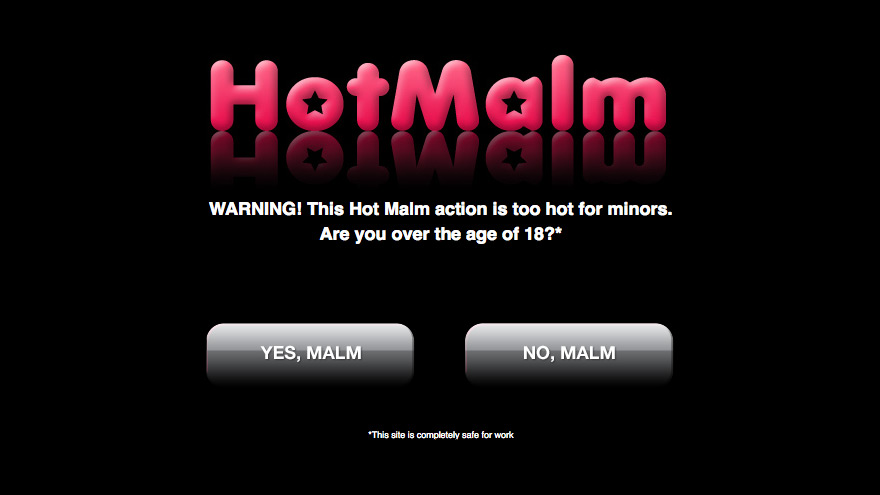 Remind me again how this isn't clickbaiting?

The first thing I thought of when I heard about Hot Malm was that I'd heard about it before. Except that it wasn't a faux-porn website featuring anthropomorphized IKEA furniture—it was a Tumblog of IKEA furniture that happened to be in the background of prurient videos, transformed into the bite-sized image format du jour, the animated GIF. It turns out that the new site, HotMalm.com (SFW, for all intents and purposes), was developed by droga5's Asa Ivry-Block & co., presumably as a viral campaign for the Swedish furniture powerhouse (all of the links drive traffic to IKEA product pages). If nothing else, it's a cheeky exercise in copywriting, predicated on lewd puns—"Hot Malm from Behind" is the most PG; rest assured the captions allude to porno tropes from top to bottom—and, as Ivry-Block told Animal New York, "We were inspired by a mission to share Malms of every size and color with the world."

As for the Tumblr—well, that's where it goes from off-color into a gray area, so to speak: JustAnotherIKEACatalog.tumblr.com is a tongue-in-cheek compendium of IKEAspotting... in amateur pornography. (It should go without saying that it's entirely NSFW; Animal's write-up includes a couple of softcore, borderline SFW images, for reference. Emphasis on borderline.) Per the about page, "JAIC is a non-IKEA affiliated project... Every post includes an animated gif from the amateur pornography video enhanced with some more information about the IKEA product in the video. A link at the bottom sends you straight to the IKEA website to check if the product is available at your local IKEA store." If HotMalm.com is an IKEA catalog disguised as an X-rated website and Just Another IKEA Catalog is precisely the opposite. But the plot thickens: as of June 24 (borderline!), IKEA is reportedly considering legal action against Just Another IKEA Catalog. Yet the anonymous founder was inspired by none other than a 2009 IKEA advertising campaign by Tribal DDB Berlin (below), in which catalog-style captions appear alongside IKEA furniture in feature films (mostly SFW, but you've been warned).

More explicitly, JAIC speaks to the sheer prevalence of IKEA furniture in our day-to-day experience. We don't even notice the anonymous Malms and Lacks that populate the various spaces we occupy and see in films (from G- to X-rated) everyday—iconic MCM or other high-design pieces maybe, but MDF side tables not so much. Therein lies the appeal of IKEA: the furniture and housewares giant has made Scandinavian design so accessible that it has become (in Jasper Morrison and Naoto Fukasawa's felicitous phrasing) "Super Normal."

Sometimes it just takes a rogue Tumblr to show us that this is the case, and while it's not entirely appropriate to spin JAIC as a form of flattery, it's certainly a sign of the times.

Sex Sells: Drawing the Line in the Florera Decorative Sand