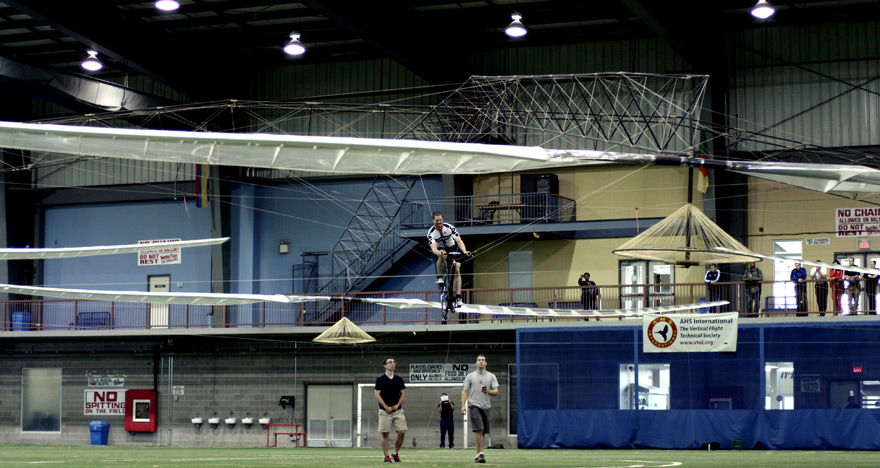 In what we'd say is a particularly big coincidence, news of two noteworthy technological feats, both named "Atlas," hit the web yesterday: aerospace startup Aerovelo won the Sikorsky Prize with an aptly-named quadcopter, and DARPA officially unveiled a humanoid robot of the same name... within 500 miles of each other, in Toronto and Waltham, MA, respectively. Seeing as each breakthrough is worth a detailed investigation of its own, we'll refer you to Popular Mechanics and the New York Times for the full scoop on each story, but here's a quick rundown on just what humans have achieved this week.

On Thursday, July 12, the Aerovelo team, led by engineers and co-founders Cameron Robertson and Todd Reichert, claimed the Igor I. Sikorsky Human Powered Helicopter [HPH] Competition, 33 years after it was established in 1980, one hundred years after Sikorsky successfully designed, built and piloted the world's first four-engine fixed-wing aircraft (he passed away in 1972; his namesake prize is administered by American Helicopter Society International). Piloted by Reichert, the Atlas met or surpassed the three criteria for the prize: the craft must hover at least three meters above the ground in a horizontal area no larger than ten square meters for at least 60 seconds. Per PopMech:[The prize-winning flight,] which lasted 64 seconds and reached a maximum altitude of 3.3 meters... came at the very end of five days of test flights [at an indoor soccer stadium near Toronto], after which the space would no longer be available. On two earlier flights, Reichert pilot [sic] the craft, called Atlas, to heights of 2 meters and 2.5 meters. With just minutes remaining before the team was scheduled to vacate the stadium to make way for an evening soccer practice, Reichert managed to squeeze in one last flight. Within 10 seconds a horn sounded signaling that he had exceeded the 3-meter mark. 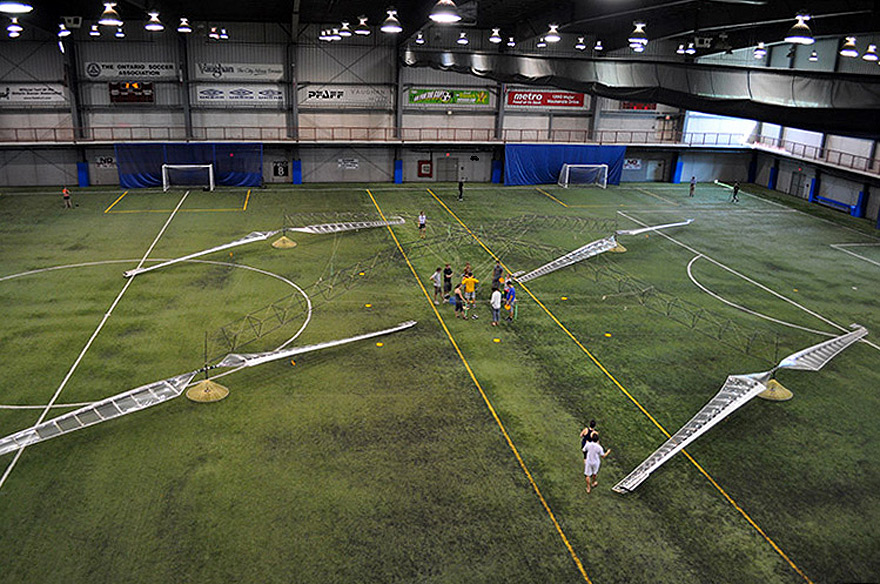 Their accomplishment is all the more remarkable because it took them only 20 months to bring the Atlas quadcopter from concept to history-making reality. After six months of initial planning, Robertson, Reichert & Co. turned to Kickstarter to raise $30 large towards their projected $170,000 budget (no word on the final bill for the project; the estimated delivery for the prize, per the June 2012 campaign, was last September, so I imagine they sought another round of funding at some point). The quadcopter comes in with a rotor radius of just over 10m and weighs in at 55 kilos (just over 120lbs)—far less than Reichert himself, a longtime athlete who weighs in at 80kg; full tech specs here.

It's worth mentioning that Popular Mechanics had been following the chronicle since the crowdfunding phase, noting Aerovelo's friendly rivalry with the world-record-setting team at the University of Maryland's Alfred Gessow Rotorcraft Center. Started by center Director Inderjit Chopra in 2008, the engineering team had set numerous records with two iterations of Gamera by the time the Aervelo-ers had launched their Kickstarter campaign last summer. Hat-tip to Kottke for posting this NPR story from October of last year, which depicts the contenders as of nine months ago; the video exclusively depicts test flights of the Gamera, but the article includes reporting from both Maryland and Toronto, noting that Reichert and Robertson actually took a brief hiatus to compete in the annual Human-Powered Vehicle Challenge at Battle Mountain, Nevada (related story here).

It's interesting to compare and contrast the designs, as both vehicles are sprawling, crank-driven quadcopters, but the major difference is in the orientation of the cockpit, both of which are modified bicycle configurations. While the pilot of the Gamera sits in a recumbent position, with a secondary hand-crank (that appears to be fixed to the drivetrain), the Atlas is designed to accommodate a pilot in a traditional upright position, right down to the handlebar setup, which allows him or her to steer the vehicle. Indeed, the Gamera "had not been originally designed with a control system, so its pilots struggled in vain to keep it within the mandated 10-meter square. Add-on control systems seemed to address the problem at the expense of overall performance." (For reference, a spec sheet [PDF] notes that the Gamera II weighs in at just 71lbs—just 60% of the weight of the Atlas—but is only rated for a pilot of 145lbs, about 30lbs shy of Reichert's mass.) 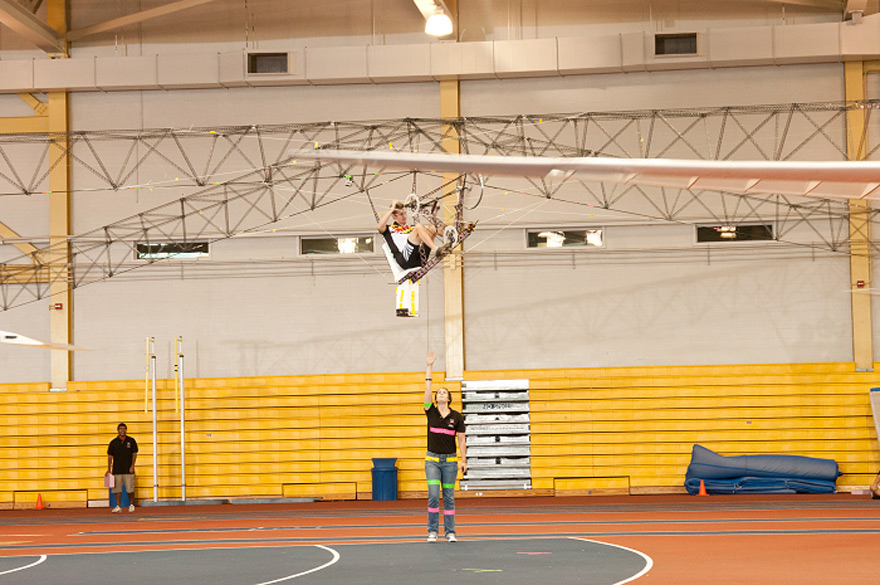 In any case, we're duly impressed with the efforts of everyone involved, and we're glad to hear that there's no hard feelings: as current Gamera team leader William Staruk told PopMech, "It goes without saying that everyone on the team would have liked to win the prize, but this is and always has been an academic endeavor, while the AHS Sikorsky Prize was our inspiration, it was not our sole motivation." 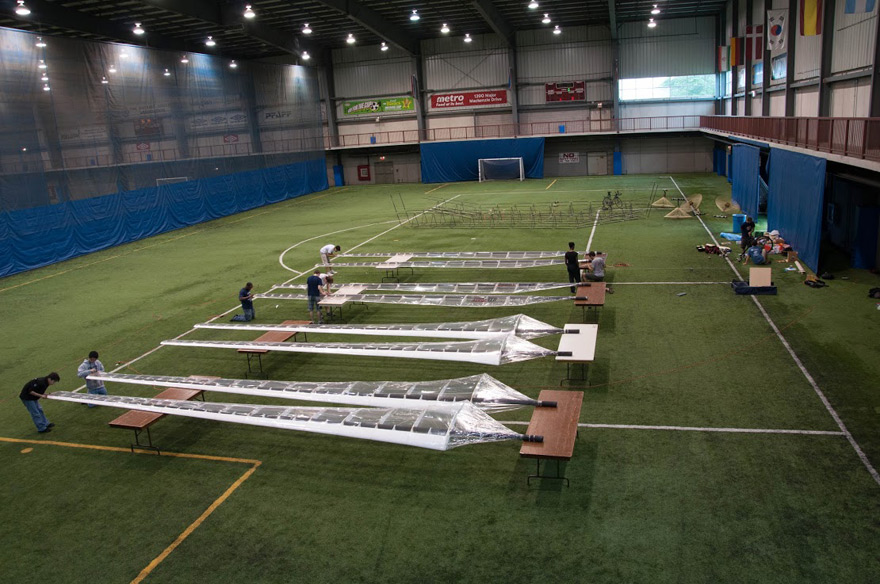 Both the Aerovelo and Gamera websites have plenty of documentation (including photo and videos) to dive into, but as a final fun fact about human-powered 'copters, it so happens that the quadcopter design is the inverse of the earliest recorded vertical-flight concept—proposed by none other than Leonardo's da Vinci himself. The distinctive "aerial screw" design was reportedly intended to be powered by four operators, turning interlocking cranks to drive a single central shaft—though it's worth noting that "modern scientists do not believe da Vinci's invention would have been able to take flight."

The second Atlas is at once both more and less of a step forward, in a manner of speaking: on the very same day that AHS International announced the winner of the Sikorsky prize, DARPA's anthropomorpho-bot 'graduated' from, um, Boston Dynamics, with a demonstration of its admittedly modest kinesthetic capabilities. And although this is the same company that brought us several apocalyptic robo-creatures, it's reportedly intended to be more like the robotics company's pack mule-bot than its nightmarish brethren—all of the research is backed by the Pentagon—"The agency stressed that it was not interested in designing either offensive or defensive weapons systems. Rather, officials said, they want to build robots that can help the military provide assistance in disaster situations." To that end, the Atlas will be cast as the protagonist in the DARPA Robotics Challenge:Six of them will be given to companies that are being asked to program them for a competition next year, with a $2 million prize to the company that programs the robot most able to perform an elaborate rescue mission. The competition will be held at Homestead Miami Speedway in December.

The six teams, which were previously announced, are from the Florida Institute of Human & Machine Cognition in Pensacola, Fla.; Worcester Polytechnic Institute in Massachusetts; the Massachusetts Institute of Technology; TracLabs in Webster, Tex.; the Jet Propulsion Laboratory; and Virginia Tech... A wide variety of other teams that are building their own robots—some of which are exotic contraptions, not in humanoid forms—will also join the competition.

The contest involves programming the robot so that it is able to climb into a vehicle, drive to a destination, get out of the vehicle, cross a rubble field, open a door, use a power tool and turn a valve... 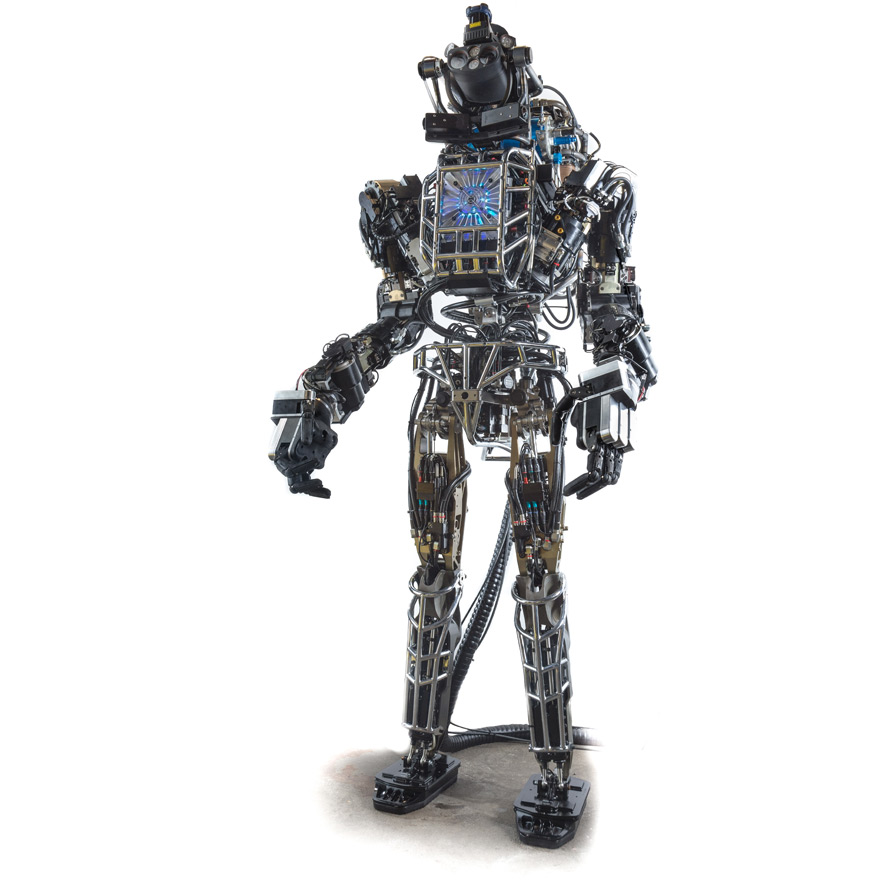 However, as we saw a couple weeks ago, the humanoid robots still have a long way to go —the irony, of course, being that a combustion engine does the trick for powering a helicopter, no autonomy required. I can't speak to how realistically QWOP approximates the challenge of what most of us would consider to be very basic motor skills, but let's just say it ain't easy to walk the walk.

Lastly, for shits and giggles, here's our remix of the (first) Atlas vid—remember to mute the original clip, at left... though I couldn't help but notice that if you get the timing just right, you can sync the two tracks, which are close enough in BPM that they're more or less beatmatched (it's worth refreshing the page a couple times to get it).