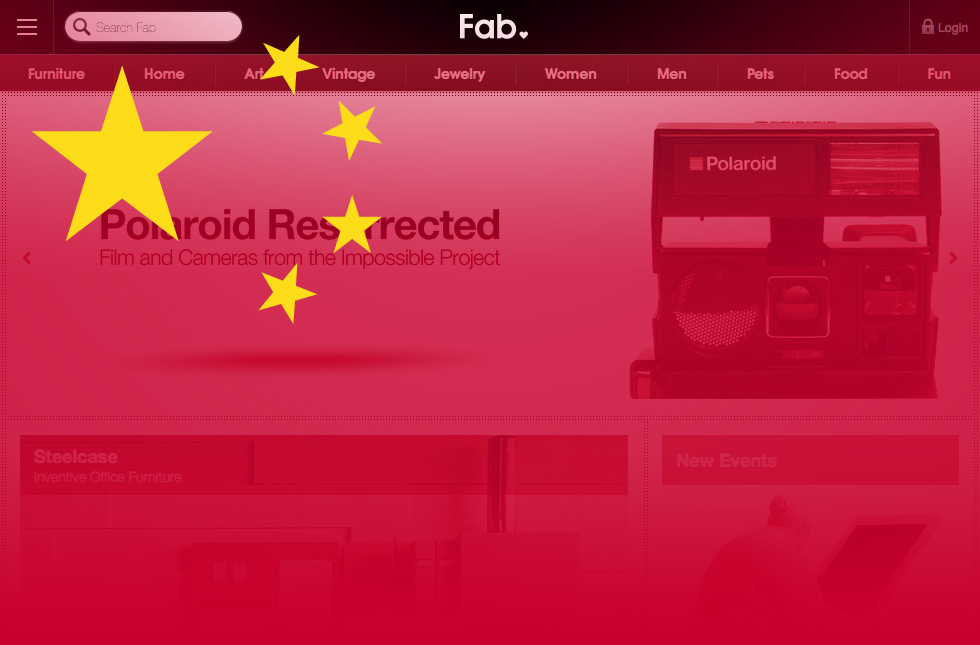 E-commerce site Fab.com is making waves in China after Shenzhen-based web giant Tencent recently decided to invest $150 million at a $1 billion valuation. Fab stands apart from other Western e-tail giants like Amazon and eBay, promising the online consumer a sensible selection of tasteful—yet edgy—products for everyday use. It's a major success in the US, with impressive numbers behind their growth since they (re)launched just two years ago. Given the recent attractiveness of online retail in China, Fab hopes to expand into the Chinese market with Tencent's support.

However, Tencent's investment is not necessarily a stamp of success either—as previously shown by Groupon's failed entry into the Chinese market. How will Fab fare among the existing lean, mean, e-commerce machines of China, led by the most cutthroat of home-grown entrepreneurs?

While Fab has seen success in the US, they have pivoted far from its previous incarnation as a gay social network, and even further from the niche ecommerce startup they were originally. By now, they've staked a claim to be a curated version of Amazon—much more mass market, with pricepoints accessible to anyone. However, this already exists in China: based on the company's price range and item selection, the majority of similar products are already available as comparable quality copycat items on Taobao, with entire stores dedicated to emulating Fab. No one can compete with Taobao prices. Fab sells everyday design at what is considered "affordable" prices for US consumers but bear what Chinese consumers would consider to be a substantial premium markup. Fab's brands will run into the counterfeiting problem already all too familiar for luxury brands but will suffer at an even greater expense. Unlike luxury brands, they don't benefit from the distinguished status or quality assurance that comes with the big couture names that brand-conscious Chinese consumer are looking for.

Does Fab care about Chinese emerging brands, or just sales in China?

About half a year ago, Fab.com launched a similar marketing campaign in India, partnering with the country's largest media firm, Times Internet. With huge populations and developing e-commerce markets as common denominators, both India and China make obvious targets for the company's strategic expansion. However, this calls to question Fab's interest in Chinese design in particular. Can Fab.com really, truly serve the Chinese designer? Is the company dedicated to creating and honoring the voice of Chinese innovators or promoting Chinese creativity? Or is Fab just a corporate machine focused solely on amassing the world's most lucrative consumer base?Feedback from American designers who have worked with Fab.com has been mostly positive, boasting results of increased exposure and sales traction. A handful of Chinese designers have already been contacted by Fab, and while working with the site might bring them greater attention and more sales, it is uncertain how else Chinese designers will benefit in a broader context. In fact, because of their very strict partnership rules that actually fine designers for being late with inventory and other issues, many designers find them draconian to work with. Furthermore, the substantial upfront investment (upwards of $15,000—yes, USD—of inventory in hand) actually prices out many smaller designers, for whom this is a massive if not altogether unrealistic investment.

While Chinese designers and artists who decide to work with Fab.com will likely have the opportunity of gleaning ostensibly more financial support, is this in the long-run best interests of advancing the sphere of Chinese design as a whole? At the end of the day, Fab.com is a business, not a cultural organization. While they will perhaps do a better job of monetization for designers, we cannot say that Fab will serve them properly in terms of calling attention to the special quality of distinctly Chinese creativity. If marketability and profitability are paramount to working with Fab.com and catering to the company's intended demographic, Chinese designers may have little choice but to sell out.

China's e-commerce industry is already thriving. How will Fab.com fare against existing design e-tail businesses such as Glamour Sales, with its focus on luxury, and Jia.com, which dominates the super local market? Fab is a certainly a late comer to this game, and will have to play an aggressive strategy in order to even keep up with China's current online giants.