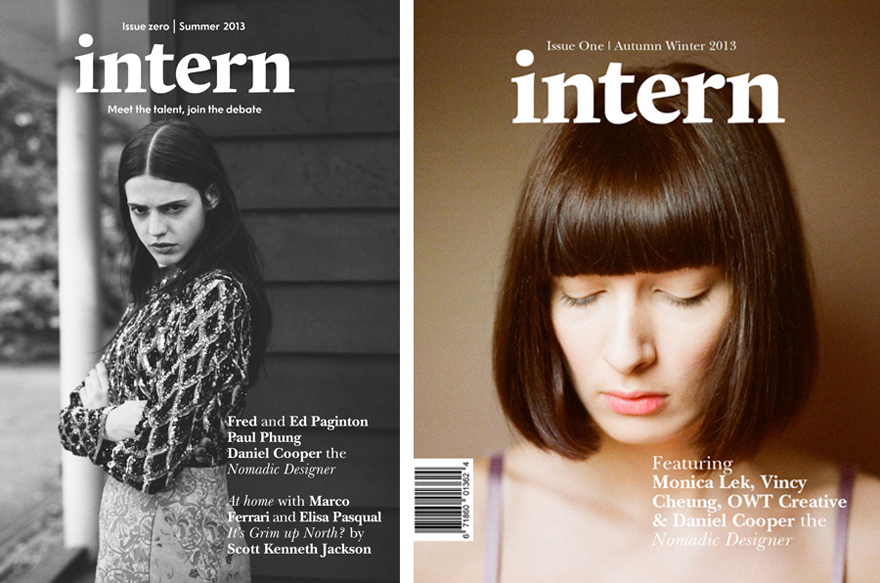 One of the greatest phenomena that every design student witnesses in the midst of their education (particularly if they go to school on the east coast) is the mass migration to New York City—or any major metropolis—around May for summer internship season. The flurry of applications and interviews for summer temp positions is a race with which most are all too familiar. As me and my design school cohorts approach the midway point in our respective internship positions—it's just the right time to question the value and implications of unpaid and paid temporary employment.

In the last few years, a serious debate has emerged over the state of creative internships. Everything from lawsuits to public pouting has fueled a conversation as to whether creative internships are in fact a strength or detriment to our industry as a whole. Since we've already done away with old-fashioned design apprenticeships, a young designer can't help but ask: where the heck are we supposed to get real world experience?

Enter Intern magazine: a UK-based magazine, currently seeking funding on Kickstarter, looks to break open the often overlooked discussion about creative internships. With the tag line "Intern Magazine: Meet the Talent, Join the Debate," we can only expect that they will be adding some much needed perspective to a conversation that has, to date, been lacking a voice for its most affected demographic: the recent and current creative interns.

As a self-identifying creative internship expert (and current Core77 Editorial Intern), I spoke with the Editor in Chief of Intern Magazine Alec Dudson about their Edition Zero and plans for the future via Kickstarter.

Core77: So what does the path to publishing a magazine look like? Where did the inspiration come from?

Alec Dudson: I guess the path to launching a print magazine began in January 2011. I had spent two months traveling and photographing the USA after completing my Masters degree in Sociology and upon returning, got approached by a friend to join him in starting a website with a couple of other guys. Initially, I figured it would just be a means of disseminating my photographs and maybe having a go at writing some photo essays, it turned out though, that I had stumbled across a passion. As the year progressed, more and more of my free time outside my bar job was becoming dedicated to the site and I was taking far more of an editorial role, using it as a showcase for others rather than myself. After the friend who invited me to the project began working some pretty awesome internships, I too decided to try and turn this 'hobby' into a career.

Why a print magazine and not a blog or different journalistic endeavor?

Having released one print edition of the website, my appetite was very much whet for print media—online stuff is fine but I love the tactile nature of magazines, the texture, the inks even the smell. That was reflected in the places I interned (Domus & Boat) who both have a strong on-line presence but whose jewel in the crown is their beautiful print editions. That side of it really drew me in to the creative industries as well, and as I spent time around designers and photographers, it struck me that a print project was always going to resonate more with this community due to its qualities as an artifact. 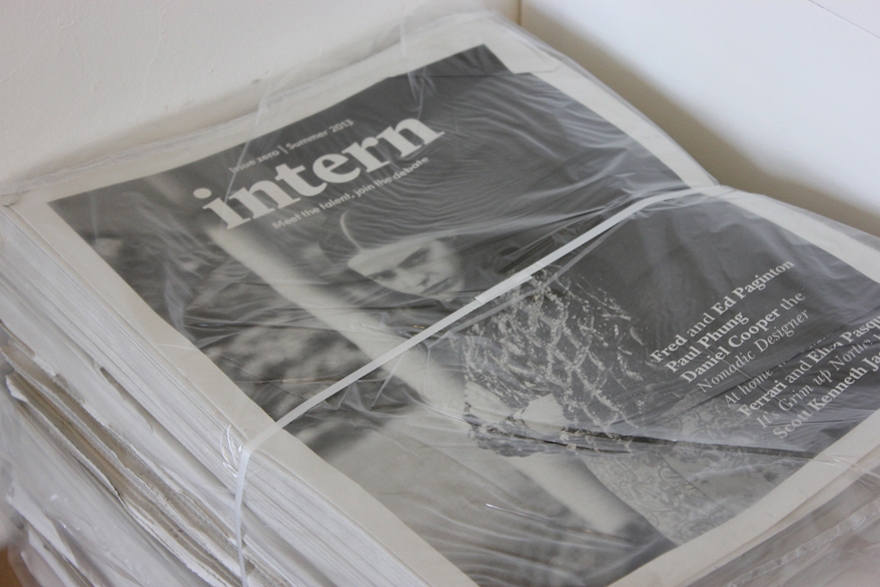 We couldn't really take on the subject without acknowledging the legal aspect to the debate, it is one of the central themes and certainly in the US at the moment, one that grabs the most media attention. The lie of the land legally speaking is a little different country by country regarding unpaid internships, as too is the culture surrounding them, so this just adds to the intrigue of the subject and gives us plenty of stuff to explore during the life-span of the publication.

How will the magazine frame the conversation or dialog around unpaid work in the creative industry?

The way we plan to frame the conversation is by initiating a frank and honest debate about internships and the reality of the current culture. This will entail interviews and articles written by those with a myriad of views on the subject and whose position in (or indeed outside of) the creative industries also varies. In order for the conversation to be productive, it needs to be both engaging and accessible. I mean accessible in the sense that someone not overly passionate about the subject can flick through the magazine, find an article that appeals to them on their level and makes them want to know more. Not all of our features will be intense, rich, philosophical riffs on the impact of the current intern culture; some will be lighter and alongside the showcase element to the publication, we aim to get people interested in the dialogue, which will urge the creative industries to do the same.

What is your long-term hope for the magazine?

Well, I don't want to get too carried away with long-term goals as my focus at present has to be ensuring that with each issue released, it is financially viable to release the next. Something as simple as slightly over-ordering the print run could plunge the project into difficulties, so narrow are the margins for success in print media. If we can grow in a steady, sustainable manner and increase circulation issue by issue then it is the hope that soon, all contributors will be paid a professional rate for their work rather than the more meager amount that is all we can afford at the moment.

In a wider sense, the aim is to become a valuable resource for interns and industry [veterans] alike. We have some plans to make the second iteration of the website (post-Kickstarter) more of a resource for interns in a standalone sense, which I think is important as the print publication is only bi-annual. These plans are very much under wraps at the moment though, so watch this space. I have (of course) had a few really lofty ideas for projects that would be really, really cool to take on but the sustainability and success of the print magazine comes first and foremost, if we do well with that, then maybe I will start to explore those ideas more seriously.

How have you sources stories thus far for the magazine?

Initial sourcing of content was an incredibly drawn out process. It was really tough to find people with a strong on-line portfolio who were just at the right stage of their (prospective) careers for them to be relevant to the project. I think though, we got some really interesting pieces together for Issue Zero—the opener "The Nomadic Designer" is a great example of a creative approach to internships—and since the editorial will predominantly be written by interns, one of the reactions I hope to trigger is "Wow, all of this was the work of interns?" I strongly believe that we can put together a magazine that aesthetically and editorially stands up next to the publications that inspired me to make it, even if it mostly consists of interns' work.

Is there a place for industry professionals to also have a voice in the dialog?

There is absolutely place for industry professionals' voices to be heard in the mag, we couldn't claim to be initiating a debate unless we considered them. A number of our features will come from this perspective, although when they are in an interview format, the interview will be conducted by an intern. It strikes me as a situation that parallels with a good internship in that wisdom imparted from experienced industry professionals can be of great help. We want to give the reader the opportunity to soak up as many different perspectives as possible so that they can form their own opinion based on the balanced manner in which we have presented some examples and accounts of the intern culture at present.

While I do aspire to have some 'big names' contribute to our debate, their names or photographs will never grace the front cover, as the interns are the ones whose work we want to promote, not the people who are already well established. I'm confident that those who will be prepared to offer their thoughts and wisdom to the publication will not take issue with this stance, after all, they we're once in the interns' position, albeit what seems like a long, long time ago.

Does Intern have interns? Are they paid?

I am not taking on any interns as I would be unable to pay them minimum wage, and besides, I take care of the majority of editorial and organizational work myself. We do have a photography editor and a couple of editorial assistants and these will be paid along with each and every one of our contributors. As I mentioned before, my only regret is that these fees are not proportional to a professional rate but the magazine's intention is to get to that stage sooner rather than later. In the meantime, it just means that my efforts are even more concentrated on making this magazine a worthwhile experience for each and every contributor, I want this to be something that they are all very proud to have been involved in. 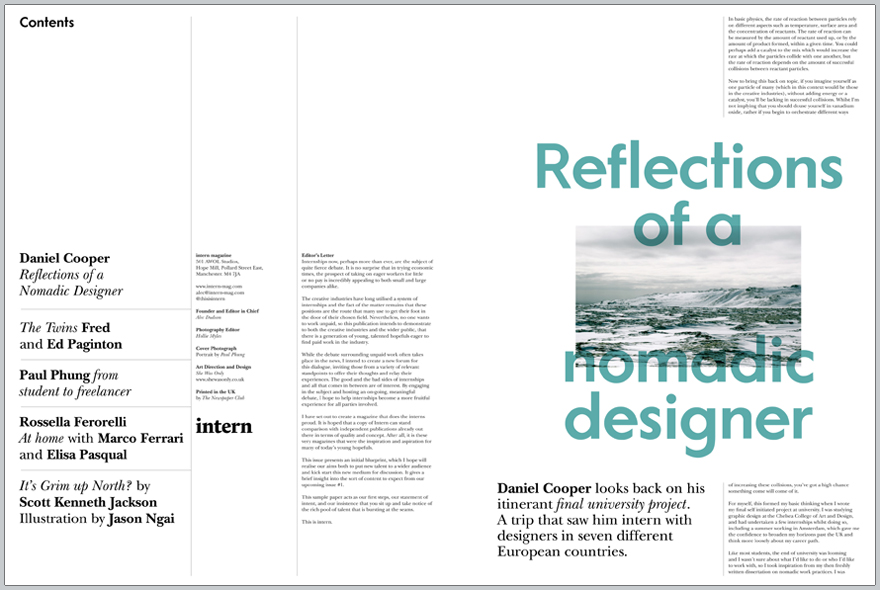 Issue Zero showcases a number of stories of trials and tribulations of interning both in the traditional and non-traditional sense. The story of Daniel Cooper stands out in distinct contrast to our conception of an internship experience. Cooper, a student in his final year of graphic design school, decided to travel to nearly half a dozen European cities, trading two days of work for a day of mentorship from design studios. The hope seems to be that if the magazine doesn't open direct dialog between the industry and students to reconsider internships, it will at least expose current interns to alternative modes of gaining experience in the creative field and broaden the idea of what an internship might entail (jokes about getting coffee and printer toner aside).

The magazine as a platform for exploring the current state of the internship model and questioning the potential for re-envisioning unpaid work is an exciting prospect, particularly for 20-somethings working their way into a professional career. If they ever expand Stateside, we're sure they won't have any trouble finding some interns. In the mean time check them out on Kickstarter.