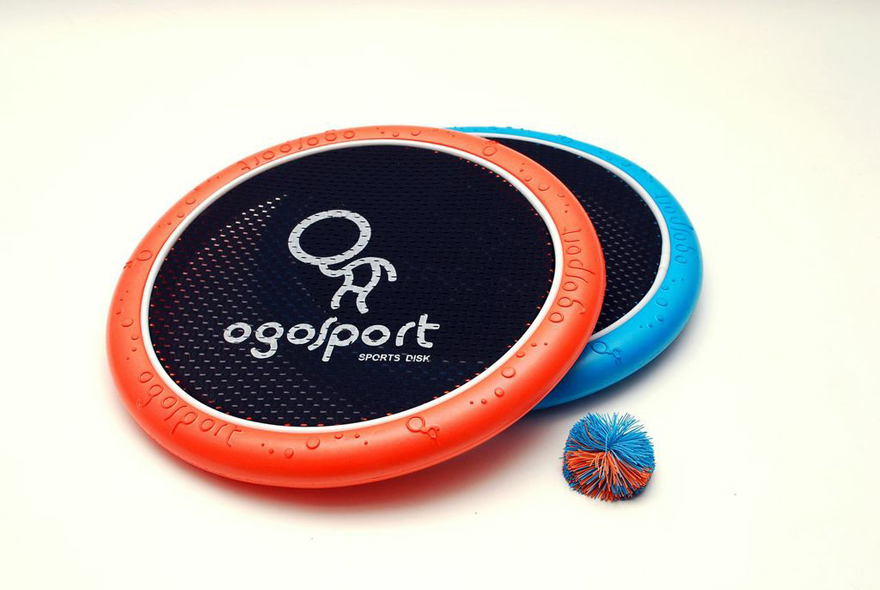 This is the eighth profile in our series on American design entrepreneurs, looking at how they got where they are, what they do all day, and what advice they have for other designers running their own businesses. Read last week's profile here.

In 2004, when Kevin Williams co-founded OgoSport with a friend from the Pratt Institute, Rick Goodwin, they had a simple philosophy: design toys to get people moving and thinking, toys that wouldn't silence kids with distraction but encourage active play and creativity. (The "Ogo" part of the name stands for Oh, Go Outside.)

Soon, products like the Super SportsDisk—which can be slung like a Frisbee or used to catch and throw balls, among other possibilities—were winning awards and getting airtime from the likes of Regis & Kelly and Stephen Colbert. Today, the company has an extensive portfolio of clever toys that embrace the same spirit of creative play, like the OGOBILD Pod, a lightweight construction set you can kick, spin and throw.

Getting established in the saturated toy market was not an easy road, however. "The toy business has a low barrier to entry," says partner Jenie Fu, who joined OgoSport in 2008. "Anyone can get into it."

As a result, making a name—and a profit—can be challenging. "Some people hope for a get-rich-quick path, which isn't attainable in hard products," Williams says. "Maybe it is in technology, but in this case we know that we will have to grow organically." 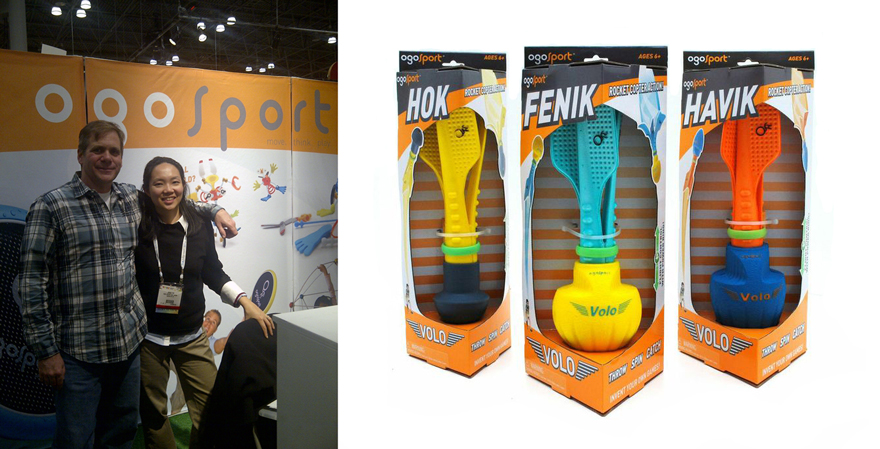 In fact, Williams initially continued to run his (now defunct) product design consultancy, Make, while launching the toy company. "That business was paying the bills for the first three or four years after I started OgoSport," he says.

It wasn't always clear that Williams, who grew up in New Orleans and had an early affinity for making things, would go on to launch several industrial design businesses. "As a kid, I always had these projects at home, like Frankenstein-ing bikes together," he says. "Since I could make stuff, I thought that I should make buildings, so I went to school for architecture. In my third year, an ID firm came and presented to us. And I remember going, 'Oh, crap! I'm in the wrong program.'"

Williams later graduated with Goodwin from Pratt's industrial design master's program. They both went on to do other things, but would get together every few months to brainstorm. "After a few years of this, Rick says: 'Lets go make toys together!'" Williams remembers. Goodwin later brought in Fu, who was one of his students at Pratt.

OgoSport now sustains a total of seven employees (including Williams and Fu), plus two consultants—but, Fu says, each year is still an unknown. "Major events have happened every year where we've thought: This could be it," she says. "We didn't freak out and we dealt with it the best we could, and we came through."The most difficult of those events was losing partner Rick Goodwin to cancer in February 2010. "That was heartbreaking and it was our biggest catastrophe to date," Williams says. "When he passed away, we had to figure out what he did, including all of the non-obvious stuff, like the way he built relationships. Rick was our main cheerleader and the vision person and we lost that. It took us two years to smooth out how to do it and we had to hire people and fill this massive workflow."

One of the things that has kept the company afloat during tough times is its ethos. OgoSport is a mission-driven business and Williams and Fu hope that all employees may live the same creative, active lives that they want for their customers. Fu and Williams both have families of their own and know firsthand the importance of things like flex time. "I've been on a health kick lately," Fu says, "so I'm making time to go to the gym in the morning after I get the kids out the door, and that's important." 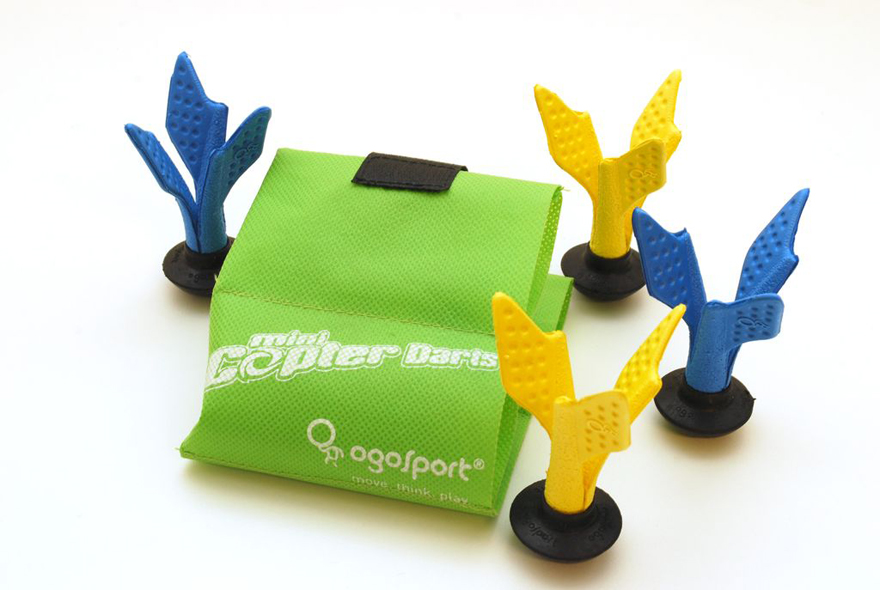 OgoSport's Copter Darts promise "all the fun of traditional lawn darts, without any of the danger." 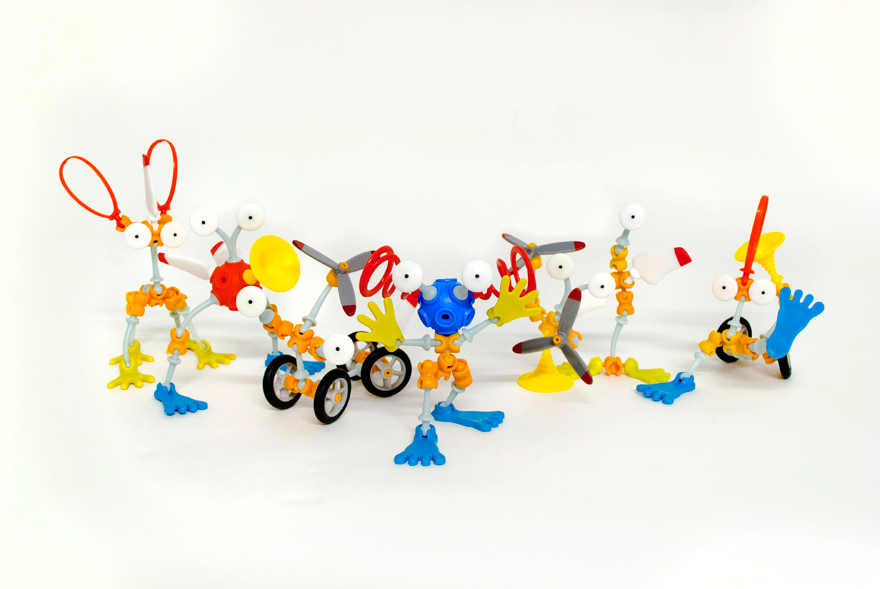 With the OGOBILD BITS series of toy-construction kits, kids can assemble a variety of playful characters.

That mission also keeps them on track when deciding what products to pursue. "My brain works on atomic explosions," Williams says. "Maybe one-tenth of what I conceive is toy-driven and all of these other ideas come out that aren't relevant. That's the hard part." Fu says: "Whenever we have these new ideas, we compare the concept against our mission and quickly realize which will work and not work."

Only about one quarter of Williams's and Fu's time at OgoSport is spent designing; the rest is allocated to administrative details. "When I was in design school, I thought I could just focus on design. But that's not true when you start a business," Fu says. "Client management, vendor management, employee management, legal issues... I spend most of my day talking to people, and I didn't see myself doing that."

Fu lives in New York City and works out of the OgoSport headquarters in the Brooklyn Navy Yard, but Williams left the city and manages the development of new products and manufacturing from a farm in upstate New York. He says he wakes around 6:00 a.m. and, once the kids are out of the house by 7:15, he's Skyping with vendors in China. "Then I really get going by 8:00 a.m.," he says. "This is an old house, the grass needs to mowed, trees are falling down. I have big chores to do every day. After lunch I telecommute with everyone at the office."

Williams says running a business is "like being in the kitchen, like making ten meals at once. You cannot be afraid to juggle stuff. The people who can handle chaos and channel that chaos in a constructive way, those are the people who are entrepreneurial. That's what's fun about what we do."

Fu adds that to start a business, you need to be comfortable with uncertainty. "Every year when we look at the next year's budget, I feel like we take a leap of faith," she says. "This is what's expected, this is what we hope for, but nothing is guaranteed."