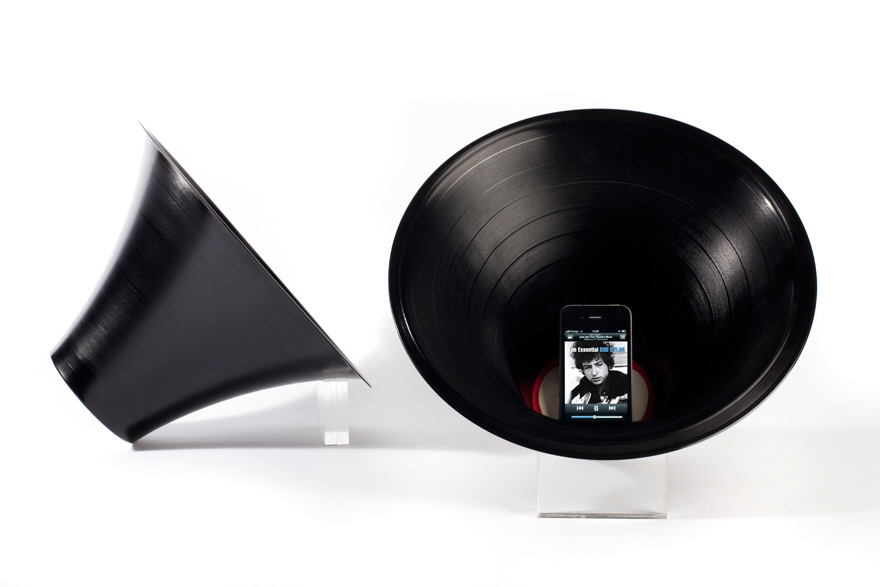 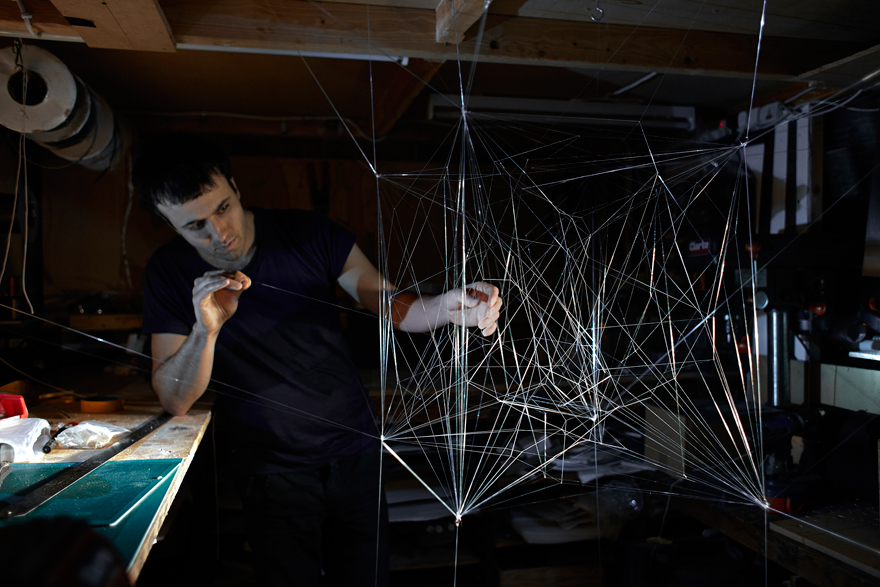 This is the fifth installment of our Core77 Questionnaire. We'll be posting a new interview every other Tuesday.

Current projects: It's very varied. We're doing furniture and sculptural lamps and a very interesting architectural project in London. We're doing bicycle accessories and a mass-produced, self-initiated electronics project. We have an exhibition opening at Friedman Benda in New York in September. So the scales vary a lot, and the projects vary a lot as well.

Mission: I think it's what all designers want to do, really. Designers want to work on original projects that move us forward a little bit, that make people see the world in different ways, and that bring some joy and wonder and enlightenment somehow. That's what I do. 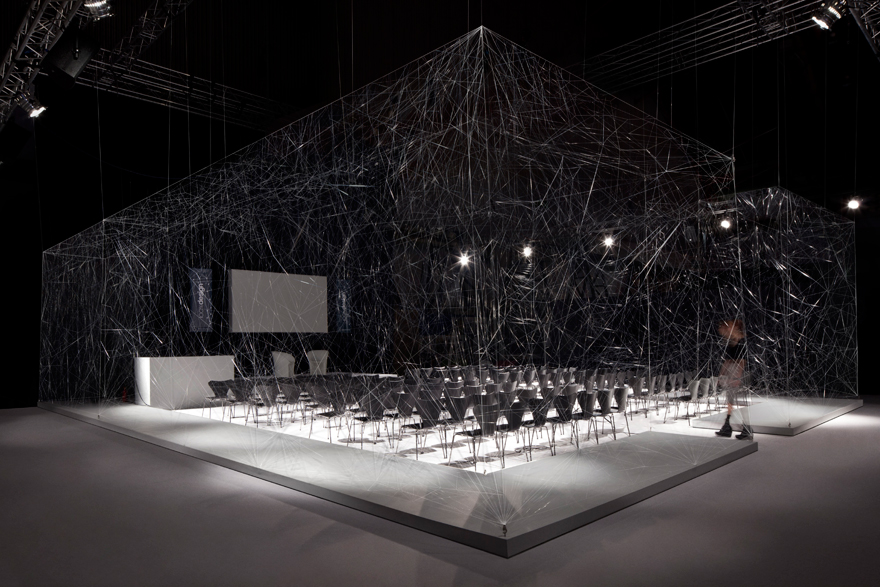 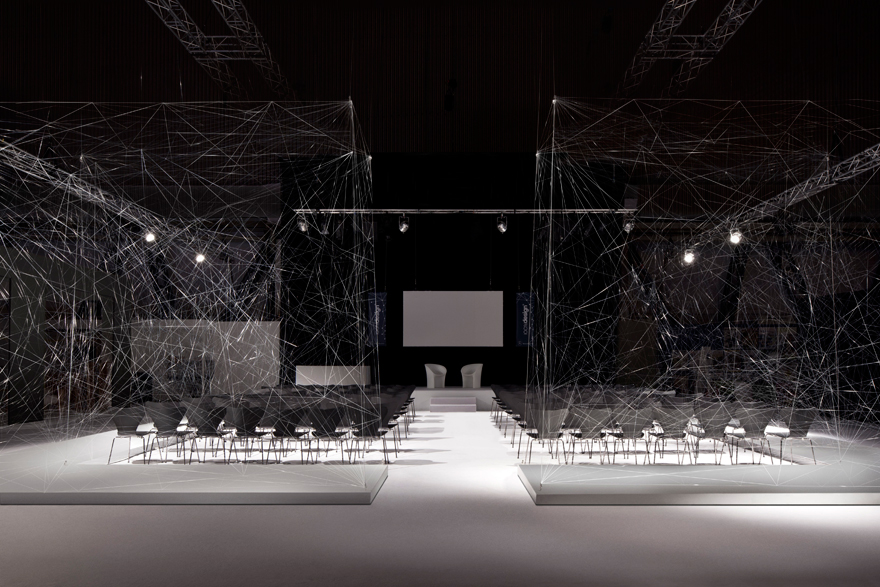 When did you decide that you wanted to be a designer? I was about 17 or 18. It was when I realized that I couldn't become an airline pilot—because I realized that I was actually scared of flying. Honestly. I had studied mathematics and physics; I was prepping for that world. And then I started bringing the arts into my world, and it slowly became design.

Education: I went to university and studied industrial design innovation. And then I went to the Royal College of Art, and it was almost about unlearning all of that and figuring out your own process. The Royal College was a beautiful moment in my career. It was under Ron Arad and these fantastic tutors, really beautiful minds and free thinkers. It changed my life.

First design job: I've never had a design job apart from the one that I created for myself.

Who is your design hero? You know, it's interesting. You see work by designers, and that's one side of the story. But then when you meet that person, that's the other side of the story. For me, I need to like the work and like the person, because the work that I really admire comes from within people's souls. They're not designing because they're told they have to design something; they're designing because they have this burning desire to create something, and that comes from a completely different place than the everyday-job idea of being a designer. So people like Ron Arad, Ingo Maurer—these kinds of people guide me. 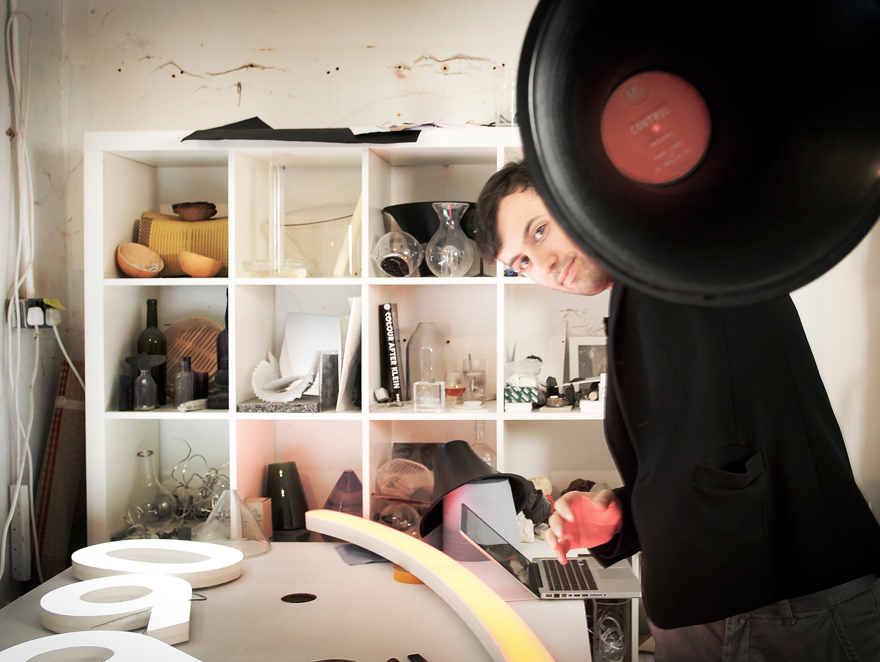 Above: Cocksedge in his London studio. Below: Change the Record, a smartphone loudspeaker made from recycled vinyl LPs. 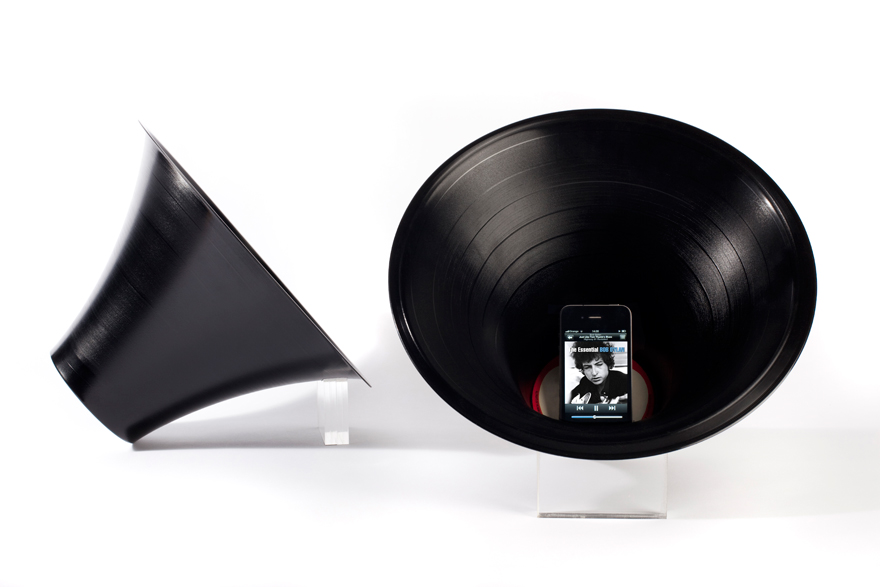 Describe your workspace: It's a hard place to describe because it's forever changing. It's quite raw. I don't like the idea of being restricted in scale and size; I think that really limits you. Some people kind of dress their design studio, and it looks really fantastic. But then suddenly you can't drill a hole in the wall or hang something or get out the chalk and draw. It becomes finished. And I don't like finished things in my workspace. I like it to be always changing and create that freedom of experimentation.

Other than the computer, what is your most important tool? Communication. Voice. I think it's all about communication—communication to clients, trying to inspire people, trying to get people to share the same dream as you. Voice is, for me, the most interesting and powerful way to do that.

What is the best part of your job? I think it's all intertwined. There's no best part. There are highs and lows, but they're all very necessary.

What is the worst part of your job? I suppose the worst part of the job is when perhaps you haven't communicated to a client in the best possible way and they haven't quite understood something and you're sort of out of alignment. That can happen sometimes. You present something and there's a disconnection, you're not quite on the same page, and perhaps the project doesn't go forward. That's a shame. 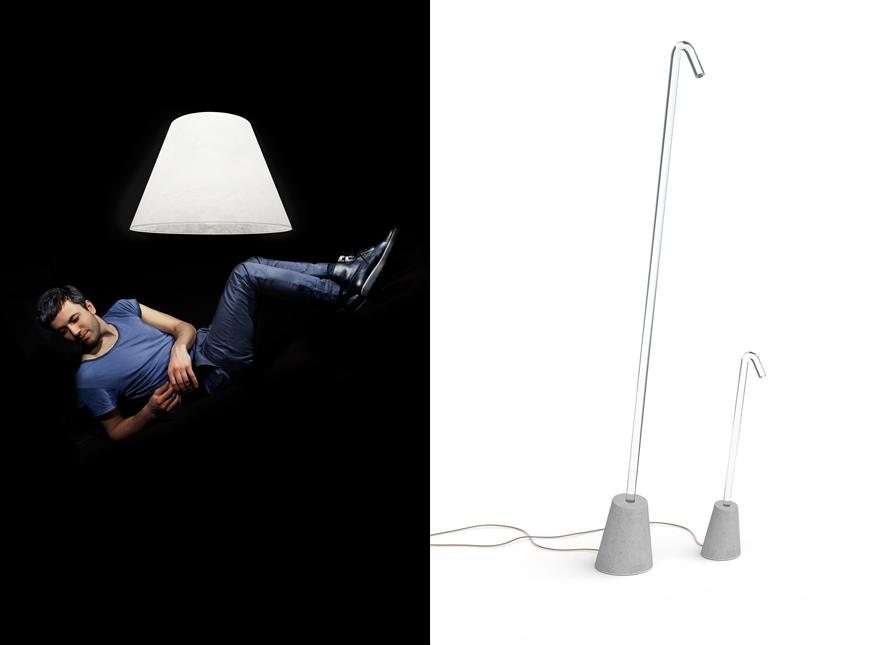 Left: the Shade light for Flos, which launched in Milan last April. Photo by Marcello Bonfanti. Right: the Pole light for Established & Sons, from 2008

How do you procrastinate? I don't do that at all. Remember, it's not a job what I'm doing. It's a lifestyle; it's everything. When I'm not being creative, there's something amiss in my rhythm. I love it, you know?

What is your favorite productivity tip or trick? Juicing. I've got a really fantastic juicer. It's really kept me going. Carrot, ginger, lemon, one apple—not too many apples, don't go crazy. It's just fantastic.

What is the most widespread misunderstanding about design or designers? I can't speak for others, but what I find is, when you say that you're a designer, you instantly get pigeonholed. Images pop up in people's minds of what an industrial designer does—more of a problem-solving approach, with ideas, sketches, modeling. That's not exactly what we do, at least not all the time. The variety of work that we're doing at the studio jumps between many disciplines and it's hard to categorize. It would be wonderful if there were another word besides designer, but I don't know what it would be. 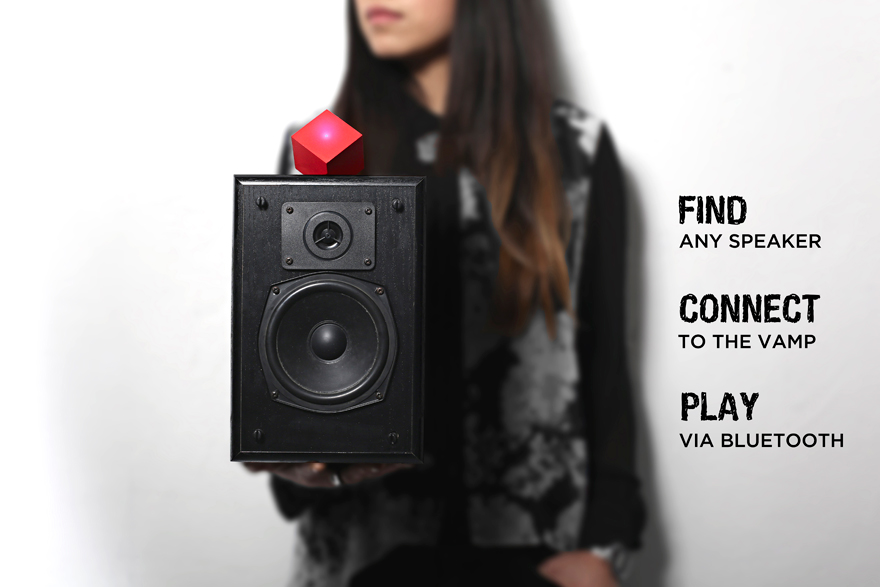 The Vamp transforms a traditional speaker into a Bluetooth speaker. Photo by Mark Cocksedge.

What is your most prized design possession? Ingo Maurer gave me one of his lamps, which is a wonderful design piece. I feel a bit guilty, but I don't really buy those kinds of design objects. I don't even have many of my own pieces, to be honest.

What is exciting you in design right now? It sounds odd saying this, but especially in London we're going through a bit of a crisis and it's a little tough out there. And I'm finding that kind of interesting—the fact that people are having to find other ways to release their creativity. Although it's tough that there aren't as many people commissioning work, or as much money being spent on manufacturing, what I'm finding is that the people who are very passionate and hungry are finding ways to do things. It's making people have to think more creatively and really kind of empower themselves.

A good example of that is what we did with the Vamp. I went to some manufacturers, and they liked it but the timing wasn't right for them. I thought, "What am I going do? It has to be this year. I'm not waiting for someone else's timescale, I've got to do it." I went on Kickstarter, presented a video, got the funding. Went to China, sourced manufacturing. You know, you can do it. It's really refreshing. The world is a big place, but it's a small place. Technology allows us to communicate with companies, with people; there's all this information. You can do it. It's an interesting moment, I think.

If you could redesign anything, what would you choose? A hospital. It's something that I've been very passionate about for a long time. I've had some very unfortunate experiences within hospitals. As a designer I've looked at these spaces, and it infuriates me sometimes. There isn't the correct thinking about hospitals. I'd love an opportunity to get involved in that.

What do you hope to be doing in ten years? A lot of the work that we've done so far has been temporary installations. They create, hopefully, an amazing sensation. And then, unfortunately, they go, because they're during Milan Design Week or during festivals or that kind of thing. But the more established we get, the more we can really target companies and do bigger projects and work that is more permanent. And alongside that, we will continue to do the gallery work and the product design and all of that. But the ambition is to move into more architectural projects.