Tom Donhou's 'Experiments in Speed': The Fastest Fixed-Gear Ever? 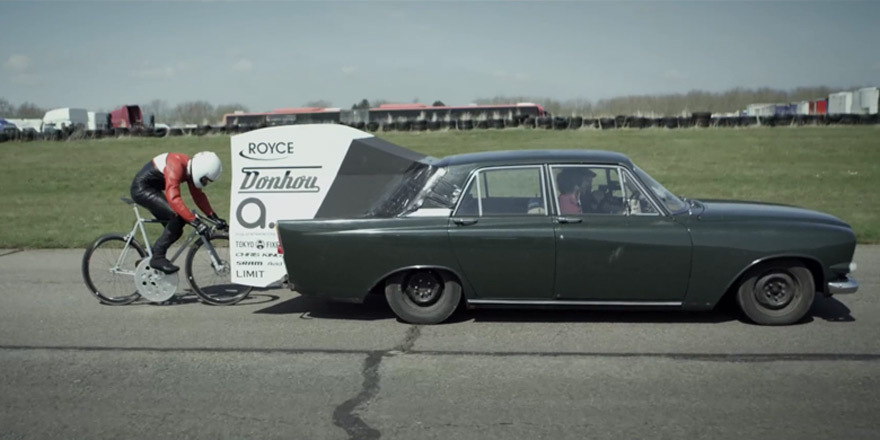 So there's no aerospace pioneer posthumously offering a cool quarter-mil for traveling 80+ mph on a fixed-gear bicycle, but Tom Donhou's homegrown achievement is pretty damn impressive nonetheless. Per his earlier characterization of the project as a grassroots, folk-scientific attempt at breaking the 100mph mark, from the pacecar—his mom's early-60's-era Ford Zephyr—to the track, a WWII-era tarmac with a sub-optimal surface. (When he concedes that the ad hoc spoiler is "essentially a shed strapped to the back of the car," Donhou also notes that "I'm not an aerodynamics expert by a long, long way...") As photographer Tristan Holden put it,The project continues the time-honoured tradition of men in sheds, building stuff. The guys that pushed the envelope of what speeds were achievable at Bonneville in the 1960's all started in the same way, with an idea and the desire to go faster. Like a lot of those men, Tom didn't have huge financial backing, just the raw materials and the know how to put the bike together. Not to mention the guts to ride it.

» Previously: Tom Donhou's 100MPH Singlespeed Bicycle, Plus More Than You Ever Cared to Know about Human-Powered Vehicles (in a Single Archive)

Tom Donhou's 'Experiments in Speed': The Fastest Fixed-Gear Ever?