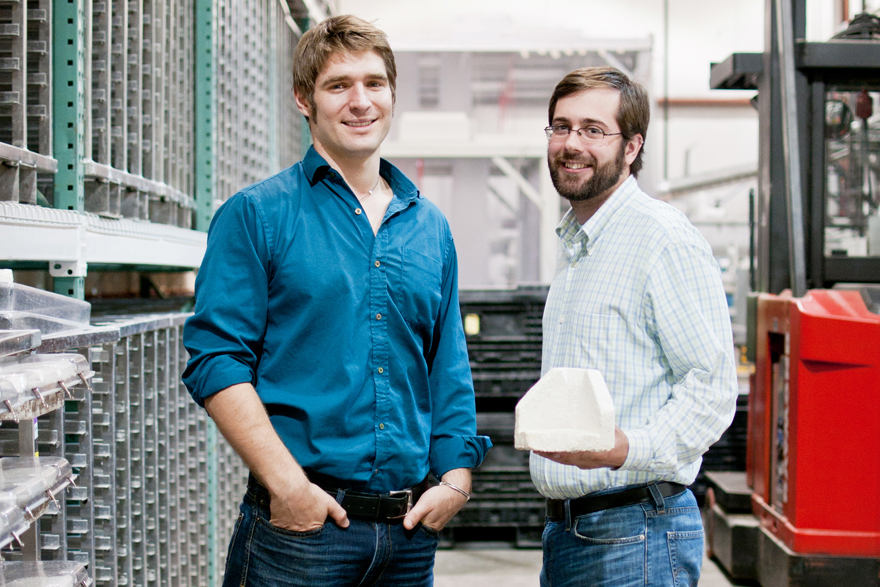 This is the ninth profile in our series on American design entrepreneurs, looking at how they got where they are, what they do all day, and what advice they have for other designers running their own businesses. Read last week's profile here.

In June, the Green Island, New York company Ecovative "grew" a house. From mushrooms. This is just the latest radical experiment from the materials-production outfit known for using mycelium—or the roots of mushrooms—to create biomaterials for everyday applications like wall insulation and packaging. For the aforementioned house, the company filled the pine tongue-and-groove walls of a 60-square-foot structure with its fire-resistant, environmentally-friendly Mushroom Insulation. "That house is still alive," says Ecovative's 28-year-old co-founder Eben Bayer. "If you were to cut a hole in the wall to run wiring, for example, the material would be dry. If you spritzed it with water, it would grow back and close in around the wiring."

The idea to grow home-compostable bioplastics from living materials began in 2007 at Rensselaer Polytechnic Institute (RPI), when Bayer and fellow student Gavin McIntyre first used mycelium to create a rigid, moldable material. With the encouragement of a professor, Bayer and McIntyre founded Ecovative out of RPI's Business Incubator—which turned out to be a valuable resource for the budding entrepreneurs. "Depending on the one you're in, [business incubators] can provide a lot of services like networking and coaching," Bayer says. "But the thing that RPI did for us that was life-changing was that for the first six months they gave us free office space."

Bayer says that they also benefitted from being left alone. "What we really needed was a wet lab," Bayer says. "Trying to do biology with carpeting is not easy. We put up walls so people wouldn't know what we were doing, and there was steam coming out from under our door. They ignored us." 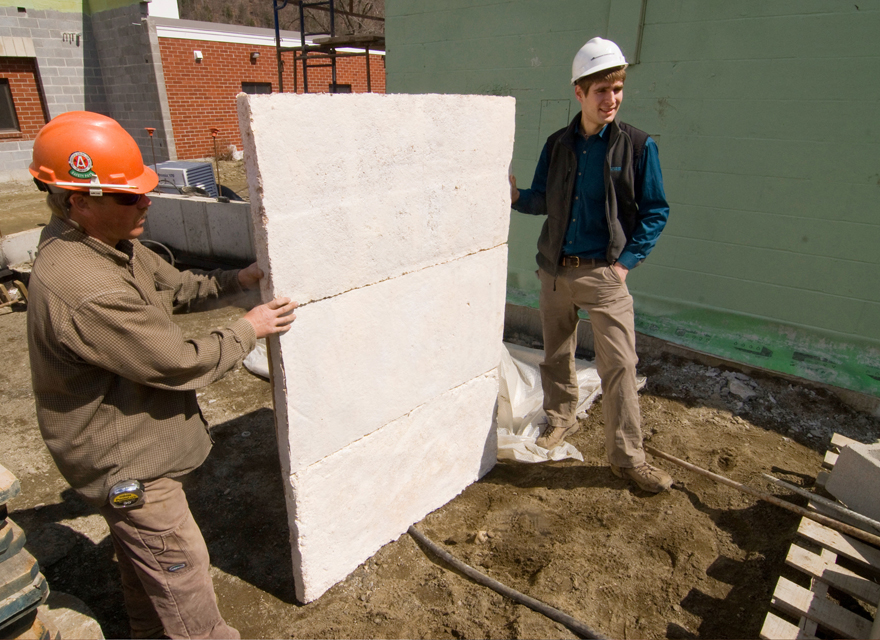 Eben Bayer with a sheet of Ecovative's Mushroom Insulation 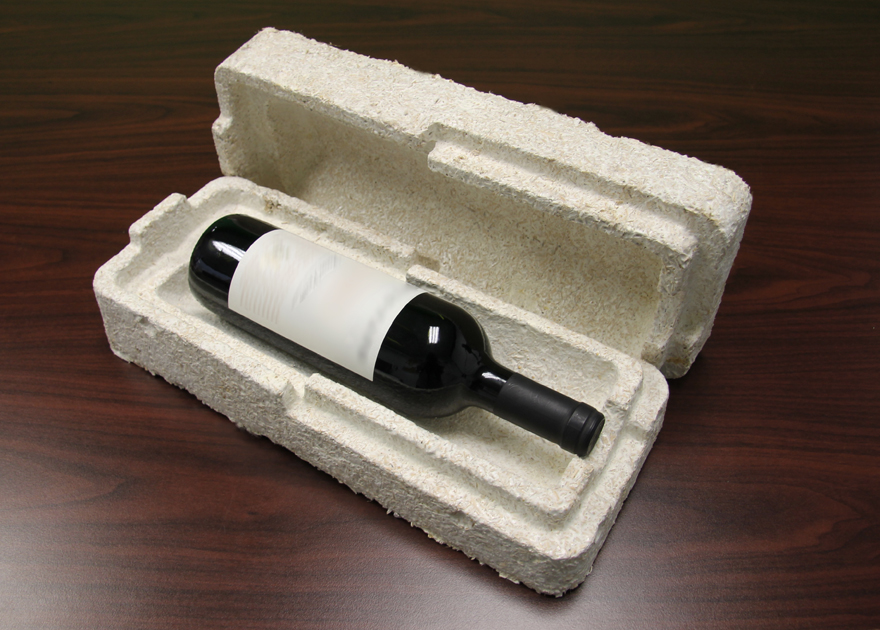 The early months were spent developing the product and advocating for its efficacy. "People would get excited about a rigid panel that is held together with a living biomaterial, but then you get the follow up questions," Bayer says. "Is it economical? Will it perform well?"

In 2008, Ecovative got the chance to prove its invention's efficacy when it won a 500,000 Euro prize from the Postcode Lottery Green Challenge (PLGC), a Dutch-sponsored competition. Suddenly, Bayer and McIntyre had to go from talking up the idea to actually proving it. "Winning that money meant we had to show the world what was possible, and it was really scary," Bayer says. "They give you all of this money and you better not screw up."

They used part of those funds to hire staff and sign a seven-year lease on a warehouse where they created the first prototype production system for Mushroom Materials and invented Mushroom Packaging, a replacement for plastic foam. Soon, companies like Steelcase began using the packing material, and by 2011 Ecovative was winning major recognition, like the World Economic Forum's Tech Pioneer award. Mushroom Packaging has since been licensed to the company Sealed Air, a strategic decision that fits with Ecovative's commitment to the "triple bottom line" of people, planet, and profit. "We are a for-profit business trying to do good, and we're letting the biggest packaging company in the world take this to scale as fast as possible so that people will use our material over plastics," Bayer says.

Bayer also says that they appropriated that early windfall from PLGC wisely. "We bootstrapped the company for a long time," he says. "We've always been very cognizant in how we spend money. People bring in their own coffee."

Ecovative does, however, spend resources on an annual staff retreat in nature. "The reality in a start-up is there isn't balance, so carving out a few days to get out of the office is important," Bayer says. "The funny thing is that most of the time, nobody wants to go. You are missing busy workdays. But afterward everyone's happy to have done it. The social cohesion, the experience of relaxing in nature, is incredibly invaluable, but it's a hard discipline to enforce."

The other business challenge at present is maintaining and evolving Ecovative's management structure. The company now employs a staff of 60 spread across two warehouse buildings totaling 40,000 square feet—so the days of everyone easily knowing what everyone else is doing are over. "We can't fit around one table anymore," Bayer says.

Ecovative's founders are also are continually finessing their management style. "One of the challenges is figuring out when to be conventional and when to be innovative," Bayer says. "If you have an innovative product, sometimes people think the business model should also be innovative, but some parts of your business should be conventional. If you look at our corporate organizational structure, it's innovative in that it's structured around projects and we like to think it's a meritocracy. But at the same time, we need to execute on complicated projects and sometimes that requires a hierarchy." 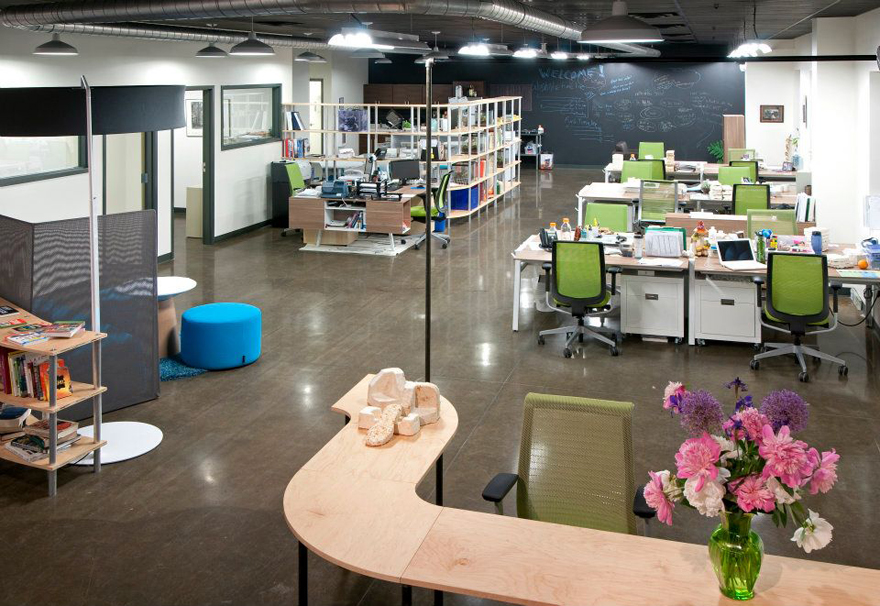 Bayer has a few pieces of advice for young upstarts looking to bring an innovative product to market. First, he says, "whatever you're doing, solve a real problem. Try not to solve a want, but a need. If you are solving a real need, people will be wiling to bet on you." Second, he says, make sure that you really understand what your solution's core benefits are. "One benefit to our product is environmental—we make a product that's compostable," Bayer says. "Another component is we are able to produce these materials more cheaply in some cases. There are many other benefits to our products, but those are the ones that I got clear on early."

If, like Ecovative, you choose to start a company with environmental stewardship goals, be prepared for what that means. "Making the commitment to be a triple bottom line company is agreeing to play to another set of rules, and you have to realize that your competitors don't play by the same rules," Bayer says. " We can't be as good as our competition; we have to be better because we have added these extra gates that we have to jump over."

Finally, Bayer says, "Make sure your goals are audacious."