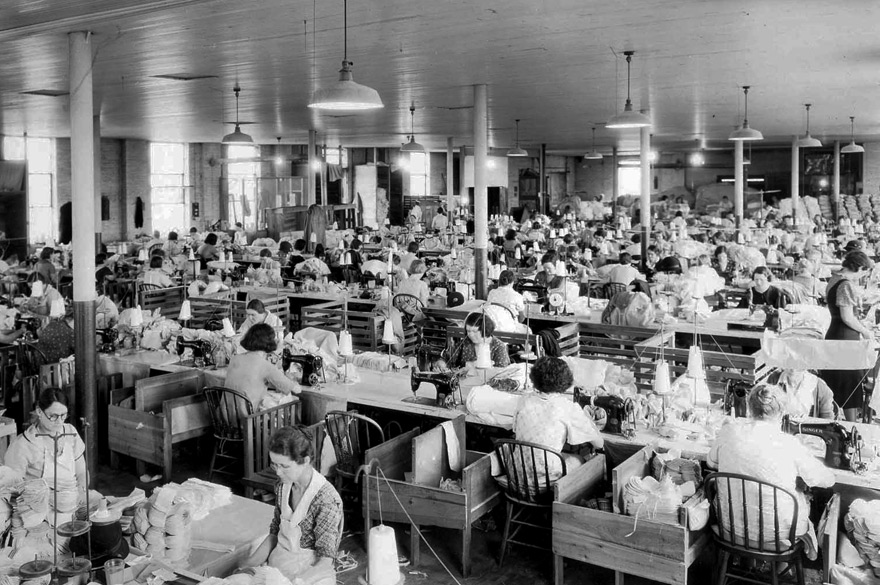 Note: Throughout this piece, I refer to simplicity in relation to the operation of devices or the experience of use, as opposed to a reductive or minimalist aesthetic.

As with everything involving language, a design brief brings with it a host of cultural nuances which reveal the true meaning of the request, a design direction that is rarely explicit but resides just below the surface, unspoken but evident. One of these unspoken standards is the drive towards simplicity.

In the world of manufacturing, productivity is king. The more one makes, the more one can sell, and the more one sells the more profitable the endeavor. At some point, one faces the limits of human ability, and we engage the services of tools and devices to bridge the gaps of effort and time. A lean system takes the critical path between volition and goal. This, in essence, is the machine ethic, the driving force behind industrial simplification, a force so intoxicating that it has found its way into almost every element of contemporary design.

Without wanting to be too binary, there are two types of activity: those which may be considered 'compressive' (chores, tasks) and those which are 'donative' (fun and hobbies).

Tools have been a part of domestic life for hundreds of years, but it was the proliferation of labor-saving devices in the 20th Century that brought the machine ethic to the fore. Washing machines, vacuum cleaners and electric appliances became commonplace tools to help complete tasks around the home. This expansion was facilitated in part by the spread of domestic electricity (a U.S. growth of 46% between 1917 and 1930), and partly by the convenient nature of simplicity as a marketing tool. 'Simpler' is a useful metric for comparison, it shows a clear progression with the promise of an improved quality of life, and thus the drive towards ease of use became part of our collective conscience.

Every design cycle brought simpler and simpler solutions. Wrinkles were ironed out, generating new devices that promised to get things done in half the time or with half the effort. Over time, traditionally donative activities began to be approached with a compressive mindset. Designers and engineers began to focus on performance and efficiency—adjectives usually reserved for industrial projects. Almost every aspect of life underwent a process of taskification, and success was judged as such.

This notion persists today, with simplicity and ease going hand in hand with progress. By portraying an activity as a task, we can help drive products into use by focusing on their compressive performance. Convergent digital devices are particularly prone to taskification, given their multiple uses. For a device with which you watch movies, play games and converse with friends, 'multi-tasking' 'task switching' and 'taskbar' seem strange terms indeed, yet they pass by without a thought.

"...but, why wouldn't we make something simpler if we could?" seems like a perfectly reasonable question, and one which you may be asking right now, but we could also make that same thing taller, softer or more purple... Can it be that we have spent so long under the spell of the machine ethic, that we have become blinded by it? 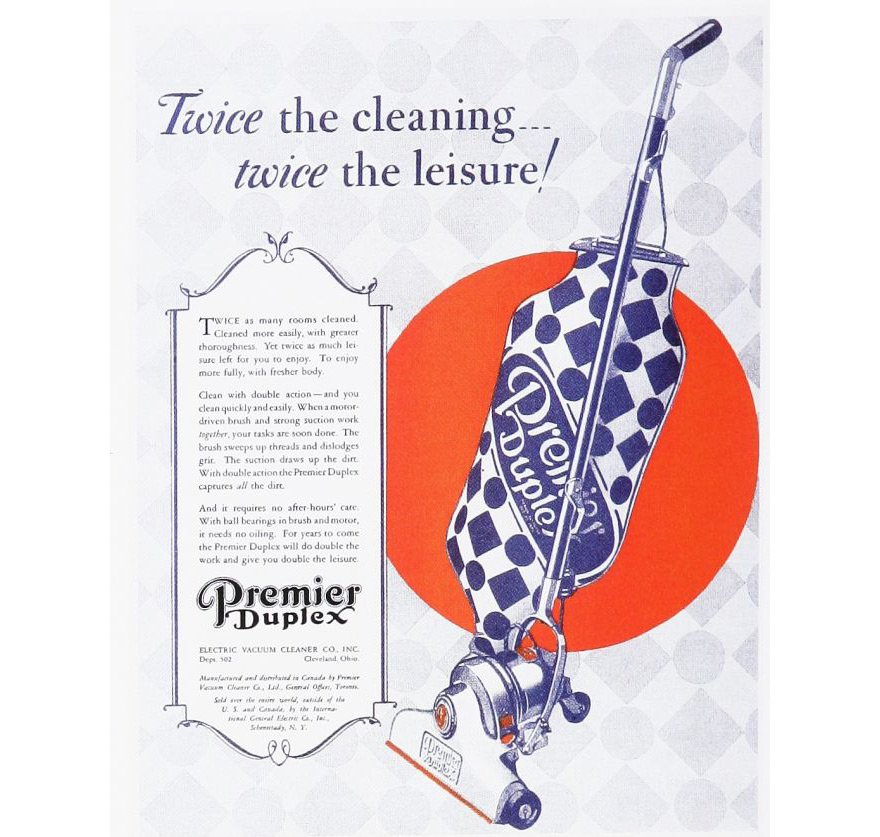 The advertisement shown above neatly illustrates the utopian manifesto of a simplified home: by compressing chores with design and industrialization, we allow for more leisure time. In More work for Mother, Ruth Schwartz Cowan illustrates how less work and more free time through mechanization has never been the case. In manufacturing, the machine ethic is adopted in order to compress work with the aim of increased productivity, rather than allowing the employees to leave earlier each day. It's entirely logical that if we adopt the same ethic in domestic spaces, the result remains constant: our expectations just keep pace with the current reality. Simplification does not lead to leisure credit, it allows for more work to be completed in a similar timeframe. Ultimately this exerts a productivity pressure upon humans as they try to keep pace with the machines, a phenomenon that James Gleick characterizes as 'hurry sickness.'

There will never be a fixed quota of work to be done, and compressing the work we need to do today will simply make room for more work tomorrow.

At the dawn of the industrial computer age, facing a future of workplace robotics and simplified manufacturing systems many people (most notably Mike Cooley) warned of a future where humans would no longer be required. This technological unemployment dystopia never actually occurred, instead becoming a Luddite fallacy. The employment didn't disappear, it just moved elsewhere—the robots may do the work, but the robots also become work. This acts as a useful parallel when considering simplification:

We cannot truly create simplicity, rather we displace complexity.

When the machine ethic is inserted into an effort chain, it generates ripples as the complexity is displaced elsewhere. A drive towards simplicity needs to be considered in the most encompassing manner: how does it affect not only the goal in hand, but other elements of the system? The new iPhone connector is indeed simpler than it's predecessor. In removing the top and bottom bias the connector may be inserted blind, but in creating this simpler solution Apple has generated significant complexity elsewhere in the ecosystem. The home audio systems, the third party adaptors, the existing chargers dotted throughout the home, car and in multiple kitchen drawers all need to be changed or upgraded. Apple will have debated this change at length, and are probably happy with the compromise in the name of general progress, but the effects of this simplification will have significant impact on other manufacturers and users for years to come.

Outside of a single industry silo, simplicity in one field may have significant effects elsewhere. Years of innovation in simplifying the preparation and delivery of food has created significant complexities in the health and waste industries as we now struggle with the very real problems of obesity, diabetes, landfill and pollution. Simplicity is intoxicating and preys upon the laziest of our genes, but as designers we should begin to approach simplification with the same end-to-end understanding that we currently afford to ecological or sustainable issues.

So where does that leave design? What if we continue to simplify every activity, to strip away any elements of complexity, to remove all manuals, all strange procedural elements, to remove all the effort. What does success look like?

Are we able to operate every object perfectly without any learning, to move towards no UI? Are we able to spend the vast majority of our lives engaging in fun, donative activities? Do we feel better? Do products make us happy? The available evidence shows the contrary, or as Louis CK says: "Everything is amazing right now, and nobody's happy."

I've written at length about what I call the Olde Aesthetic, the pervasive mood in contemporary society for a simulacra of heritage: handmade belts, the slow food movement, 'artisanal' clothing and organic farming. One of the drivers behind this movement (there are many) may be an increasing sensitivity to skills which take time to master. There is an admiration for production methods which are slow, difficult and complex, largely in contrast to the simplicity, availability and homogeneity that we have seen for the last 40 years or so. By blindly simplifying systems, we may be at risk of removing all traces of joy, of removing any element of mastery, or triumph over adversity. I believe humans love complexity in the right places. We love to expend energy, to learn and to master complicated systems. We bake cakes from scratch, we climb mountains, we learn the piano. All of these things can be significantly compressed through the application of a machine ethic, yet are they improved? Hardly.

Towards a New Simple

Every designer knows to question their brief, but the notion of 'simpler is better' still prevails. It would be churlish to suggest that designers take steps to deliberately make any product more difficult to use than it's predecessor, or to adopt an Anabaptist outlook on progress and technology. What we should understand is the balance between destination and journey. Be aware of the differences between compressive and donative actions, and apply different thinking to each. Be alert to taskification.

Perhaps replacing 'simpler' with 'more rewarding' might take us some of the way to a new approach, embracing productivity where needed while leaving room for mastery, enjoyment and satisfaction in use.

As a wider subject, we should begin to embrace the notion of complexity displacement. In making a particular product or service simpler, we should be sensitive to the effects elsewhere. Is it right? Is it ethical? Does it have negative effects on someone other than our target user? The beautiful simplicity of many of the products and services we enjoy today may actually make other lives significantly more complex and potentially more miserable. An end-to-end appreciation of simplification is perhaps the boldest new horizon in our collective design conscience.

As designers we have an opportunity to shape the world how we see fit. We should design for the benefit of humans, with all our complexities. We should embrace learning in products, revealing new layers of understanding over time—then, perhaps, we will begin to design products which create a lasting bond with their users.