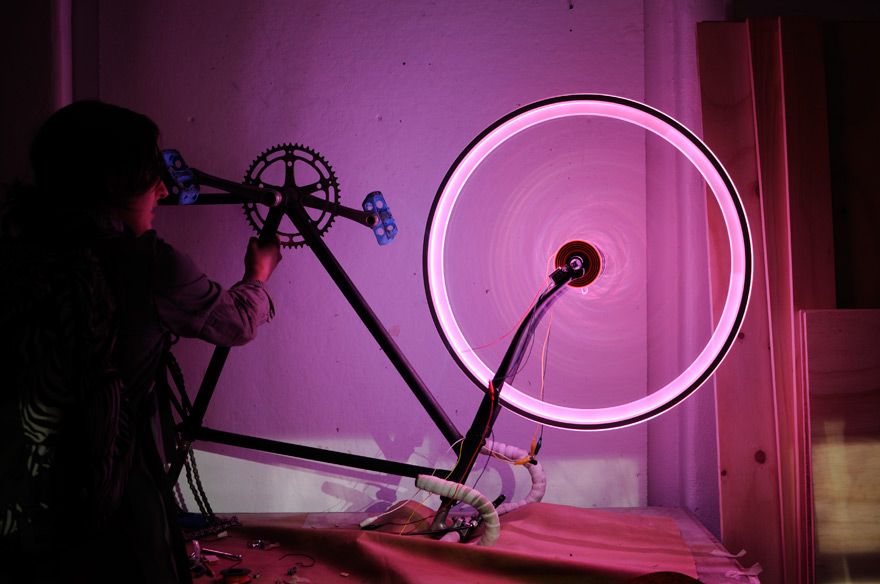 Project Aura illuminates the wheels of your bicycle, increases your visual presence on the road and better communicates to drivers your presence and behavior. But it is more than just a beautiful bicycle light, it is a platform for drivers to better understand bicyclists. By illuminating the wheels, drivers are immediately aware that a bicycle in the road is, in fact, a bicycle, a human-powered vehicle with two wheels... no two ways about it. It's also smarter than your average bike light, conveying speed by changing color and automatically turning on and off based on ambient light and bicycle motion.

Freshman year at Carnegie Mellon, in the midst of a particularly difficult point in one of the first ever studio projects, a professor told us that design was like birthing a baby. "It's messy, painful, and takes hours upon hours of emotional and physical labor. But in the and you have a beautiful thing which you have created from nothing and brought into the world."

In a way, the birth of Project Aura was an accident, an unplanned pregnancy, if you will. It was our sophomore year of college, things get crazy, you know, and before we knew it we found ourselves with this little beautiful accident. It wasn't the actual product that was an accident—we worked tirelessly for months in addition to our regular studio and course conceiving the prototype. But its success was very much an accident.By the end of the academic year, we had finished the prototype and made a video, which we posted online. At that point, we thought the project was done—that it would be a nice portfolio piece, to showcase alongside our other work. We both packed up and went back to our homes to Southern California and Baltimore. A week later, Core77 wrote an article about the project, and before we knew it, the video had 100,000 views. E-mails started coming in, asking when, where, and how it could be purchased. We were shocked, overwhelmed, ecstatic and scared.

We were proud of that video, and it carried us a long way. But what you the viewer can't see from that video is how un-functional our prototype actually was. The tires could not be pumped past 20psi or the LEDs would short out, the circular electrical contacts to give power to the wheels made a horrible screeching sound, and about one out of three times, the whole bike just plain didn't work.

However, we learned an incredible amount from that first prototype. Before that, neither of us had built anything functional—it was all design school form studies, drawing exercises, blue foam and scale models. For this project, we had to develop our skills from the ground up, first learning how to solder, then how to build a functional circuit and so on: Are capacitors polarized? What gauge wire is appropriate? Is there a convention for the wiring color? How can you make custom etched circuit boards? It was a lot of trial and error, and we were lucky enough to be at Carnegie Mellon, where access to these kinds of knowledge resources were readily available. 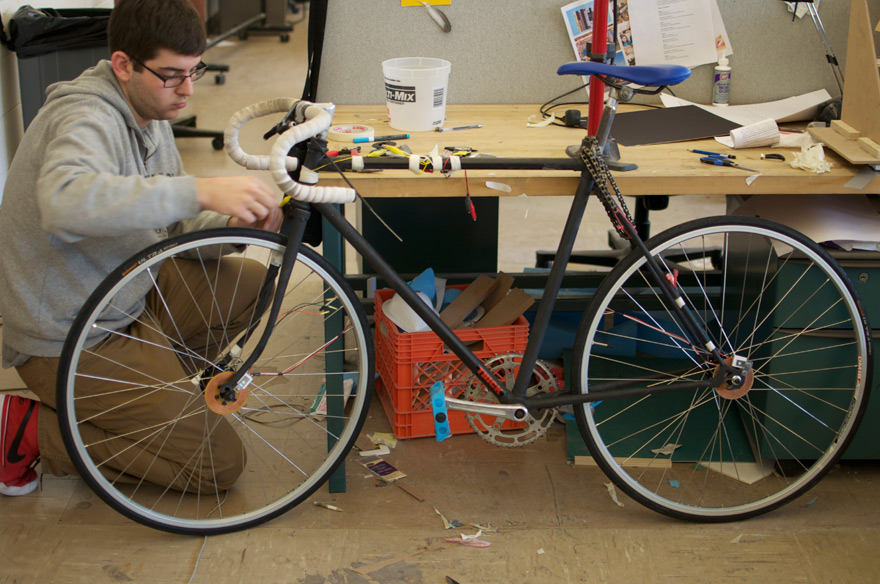 But the prototype did demonstrate the concept, and that was a great accomplishment in our minds. We were just proud that we had built something, period. The fact that it actually had potential to be a useful tool, and that had received an overwhelmingly positive response was an enormous cherry on top. However, we quickly realized that if we were going to move forward and try to make this project into an actual product, we had to completely redesign the entire prototype.