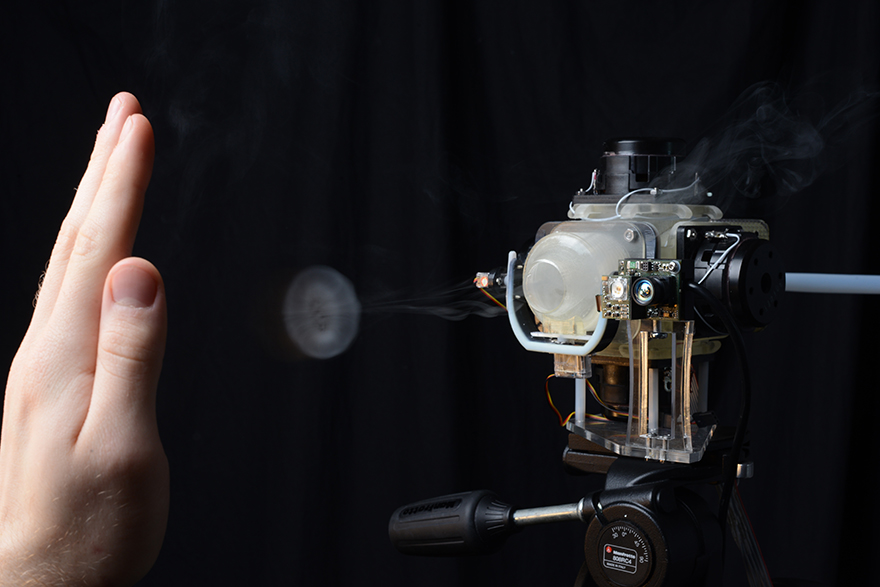 From Canon's Mixed Reality System to Microsoft's see-through 3D display to Google Glass, the world's biggest technology companies are getting good at tricking our eyes into seeing things that aren't really there. But the missing piece in the feedback puzzle has always been the sense of touch. Videogame controllers can vibrate to simulate gunfire and racing car engines, but they require you to be physically grasping the devices.

Now, however, the folks Disney Research have created a way for those tingly little nerve endings on your skin to receive feedback. And they've done it by sculpting air.

This new haptic technology is called Aireal, and through it the gamers that it's initially aimed at can feel virtual objects, experience the sensation of touching various textures, or get kinetic feedback. All without any need to wear gloves, vests or suits. Puffs of air can be controlled in terms of varying strength and speed. So it will be capable of creating a sensation as gentle as a butterfly's wings or as strong as a baseball caught in a glove. 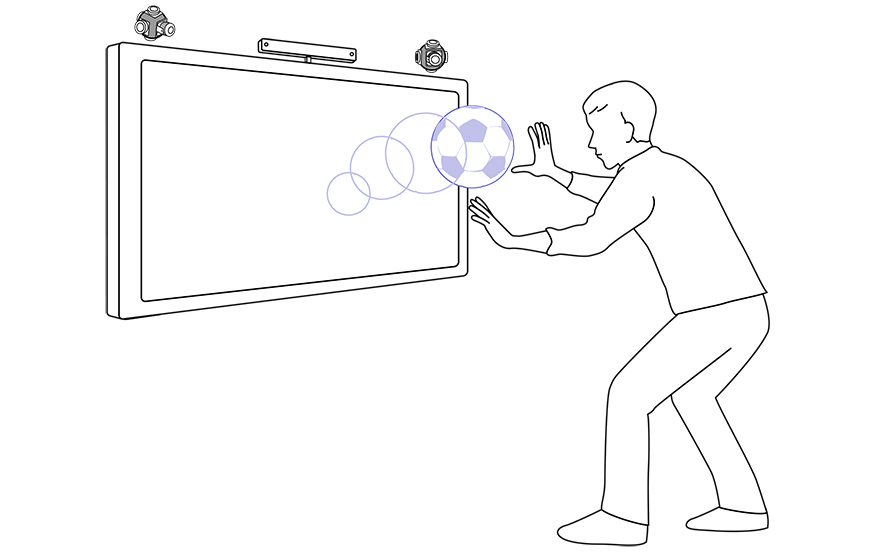 So how the heck does this work? The technology creates a vortex, which is a tightly held column of moving air that can travel relatively far and keep its shape and speed. (A tornado is a type of vortex.) Vortices can travel much farther than regular jets of air. In fact vortices can travel nearly five feet before accuracy drops below 80 percent. But when this traveling spinning ring of air touches something, like a person's skin, the low-pressure within the vortex collapses and this produces a force the user can feel.

Next question: How can this "force" provide haptic feedback that is perceived by the user as three-dimensional? 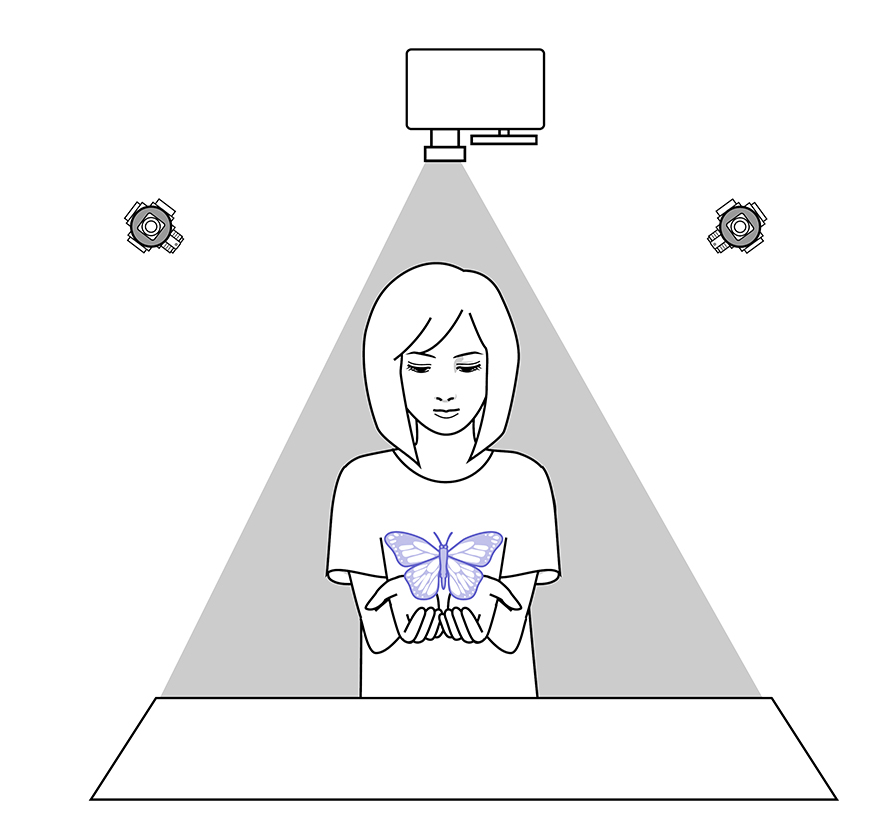 Aireal uses a flexible nozzle secured to a gimbal (a gimbal is a structure that allows for something to rotate in all directions on a single axis.) A 3D depth camera tracks the user and using data from various sensors this nozzle can send a vortex of air to precise locations anywhere within a three-dimensional space. Place multiple nozzles in multiple locations, and you've got your dimensional bases covered. 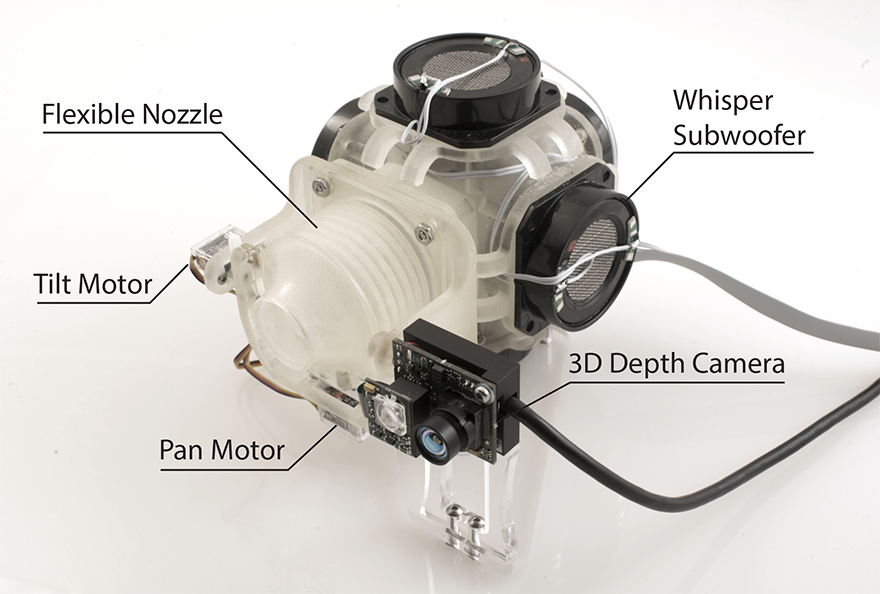 Each module for Aireal is made from 3D printed parts so the costs of production are low. And the modules are scalable, meaning they could fit in something as small as a phone or large enough to cover a commercial theater.

Disney says there are a wide range of applications for interactive spaces: Including gaming, storytelling, but also providing physical feedback from mobile devices or other digital screens or displays.

While textual descriptions of this technology can only go so far, the folks at Engadget do a fairly good job of describing what they found at SIGGRAPH, where an Aireal demo was held. They describe the experience of feeling a virtual butterfly here:

Once it landed, that small bit of air offered up the physical sensation that it was actually touching us. As we moved closer to a virtual open window, wings went a flutter and the whole sensation increased a bit. Sure, what we saw was a fairly simple use scenario, but there are aspirations for this to enhance gaming experiences and other augmented environments (likely within the confines of a Disney park, of course) with the addition of haptic feedback. 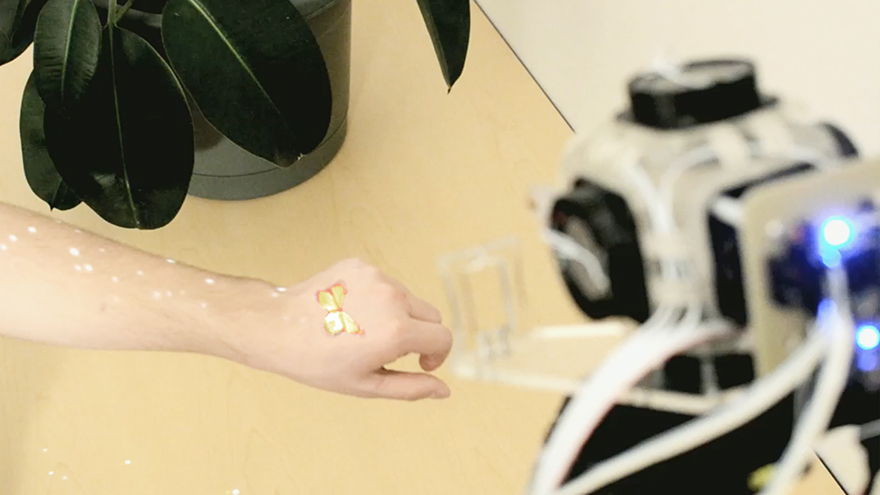 Of course a video may be the best (and fastest) way to understand and visualize the whole thing: