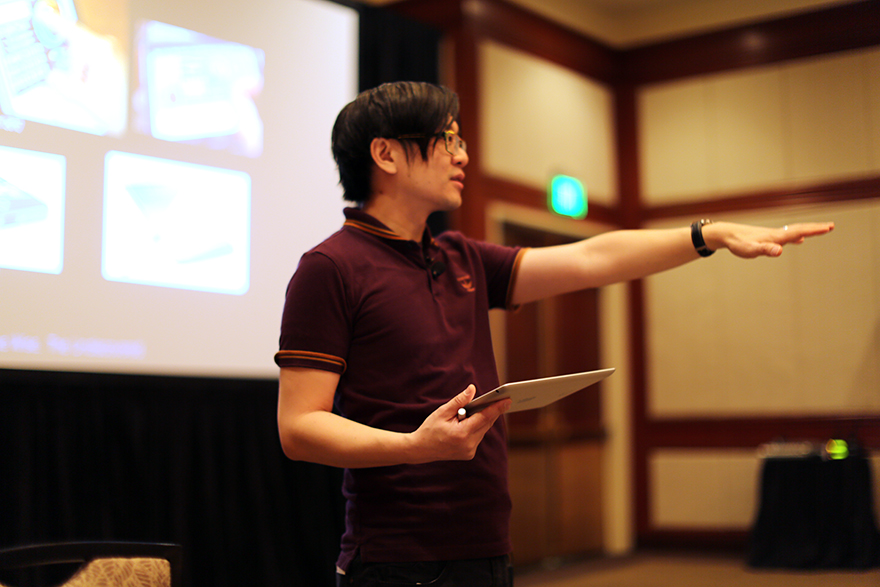 Autodesk's Chris Cheung is one of the key people responsible for bringing you SketchBook Pro, which was pretty much a gamechanger for ID sketching. Now, together with Autodesk's Media & Entertainment manager Shawn Hendriks, he's providing another new experience for designers: The upcoming CAVE Conference, aimed at "artists, designers and storytellers," and boasting speakers like Syd Mead, rendering god Scott Robertson, Pixar Art Director Jay Shuster and Monty Python's John Cleese. Where else are you going to hear people like this speaking at the same event?

We caught up with Chris for a little background on who he is, what he does, and on what you'll find at the CAVE, which is scheduled on the front end of this year's Autodesk University (held every December in Las Vegas).

Core77: What is your work background? Chris Cheung: I graduated with a degree in Industrial Design and this is how I originally got into software. After graduating, I was really interested in 3D modeling and visualization, so I invested in taking courses to learn Alias. That was a huge pivot in my career that lead me to taking a job with Alias. It was crazy because suddenly I was working in cutting-edge high tech creating design solutions for product, automotive and entertainment professionals. This was actually my first practical experience where it became apparent how significant the overlap is across creative domains, in respect to creativity, technically and emotionally.

What's your official title at Autodesk? I'm a Product Line Manager, so I am responsible for driving product initiatives for SketchBook Pro and other projects related to digital art tools.

And what are some of the things that you do for your job that aren't obvious from the title? It's actually a pretty good title, meaning, since I am managing a piece of the business, I can get my grubby little fingers on many aspects of our products. I like to think of a 'product' in a broad sense, so I tend to think a lot about tangential aspects to users' experiences or even things that drive their perception. In this manner, things like communities, collaborating on adjacent projects, and events become important extensions for me.

What was your involvement with SketchBook Pro? Even though I've only been the actual Product Manager for SketchBook for the last 5 years, I have a deeper history with the drawing tech that pre-dated the introduction of SketchBook in 2000 with the first introduction of the tablet PC. The original technology was created years before and only worked on IRIX workstations. Drawing and sketching digitally has always been an important component, so it was among the things I worked on in tandem with 3D tools. Back in the day, it was a big deal to get a stroke to draw fast enough so that it gave an authentic experience to a traditional designer. It is kind of funny now, especially after getting that same engine working on the iPhone and Android smartphones in 2009. I feel pretty lucky to have been part of these evolutionary milestones in the technology of an activity that I've always loved since being a kid: DRAWING! How has Autodesk University changed over the years? Autodesk University has gotten better over the years, really becoming an important thought leadership, user group, and professional training hub. The core audience at Autodesk University is predominantly those in the architectural, engineering and manufacturing space; but this year, new specialized gatherings are going to embrace completely new people. To me, this an unbelievable opportunity to introduce a new experience to creative professionals.

Tell us about CAVE. CAVE is a new, dedicated conference that is under the Autodesk University umbrella. It kicks off two days before AU begins and is really focused on bringing together creative talent from multiple disciplines. It is about bringing artists, designers and storytellers together to cross-pollinate and take advantage of the rich knowledge and experience that impact career-creatives. Beyond all the similarities in approaches and ideas that may touch everyone, this is also a platform where sharing different ideas or niche concepts can expose new insight.

What prompted the idea for CAVE, and how long has it been in the works? We have long been organizing smaller-scale gatherings that bring together multiple creative disciplines. Whether it is an art exhibit, workshop or small seminar, we have received truly enthusiastic response from participants. In many ways, the popularity of SketchBook Pro was a precursor because of the broad range of people, application and industries that rely on drawing. This gave us a reason to start bringing artists & designers together into the same environments, and seeing what happens when those walls open up is wildly rewarding. We even see this in some of our online communities; we see artists and designers sharing tips and ideas. I love it when I see artists realize their skills, or ideas open up some new opportunity in their lives.

So, I think the making of CAVE have been brewing for a few years... but practically speaking, we only started putting this conference together starting this spring! The passion of the team and the incredible support of the speakers has enabled it to come together so quickly and naturally. For example, normally, Syd Mead doesn't do any appearances in December, but when I described what the event was about and what it was trying to achieve, he was onboard. This is the kind of response we've been getting with pulling this show together!

What's the hardest part about setting up the CAVE event? I think because of Autodesk University and all the events we participate in as a company, the logistics of something like this is actually the easy part. The part that really matters is the 'soul' and the substance. Not only do people need to be convinced there is value to attending CAVE, but we want them to LOVE what they experience, to leave with some combination of knowledge, fresh perspective, new contacts, cool swag, and hopefully some spark of undiscovered possibility in their professional or personal lives. That sort of intangible something is the hardest part to plan for.

Who are some of the featured folks at CAVE, and what will they be doing? I think many designers will instantly identify with Syd Mead and Scott Robertson as inspirational figures, but I think the program really becomes brain-food with the broader presenters... everything from the importance of the story or narrative, core artistic skills, the endless new cross-roads of art & technology, the psychology of your mind, and the never-ending conflicts between business & creator. Personalities like Lorne Lanning, the creator of Oddworld; Skylar Tibbits, lecturer at MIT; Jay Shuster, production designer at Pixar; and Maria Konnikova, writer of Master-Mind... these speakers offer a wealth of tangential, but applicable knowledge. Beyond speaking sessions, we will have a dedicated exhibition hall for networking and activities. This is where all the meals will take place on Monday and it is also where we will host our CAVE party on Monday night. There are just so many surprises in store, some we will reveal on www.autodeskcave.com, where others, you'll just have to be there to see for yourself!

CAVE will be held from December 1-3 in Las Vegas. We'll be back with more pre-coverage when registration goes live in mid-September.